Up, Down, and Up Again

Well, I suppose it’s inevitable that Bill and I would catch colds. You don’t leave summer and arrive to a blast of winter without a shock to the system. We had a first short bout with the flu/cold but tried not to let it keep us down.

Last week we visited Lenga, and then the mine in the town of Lota (where former miners lead tours 930 yards under the water), after taking a walk in that city’s lovely private park. 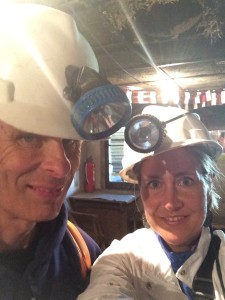 Getting ready to go underground 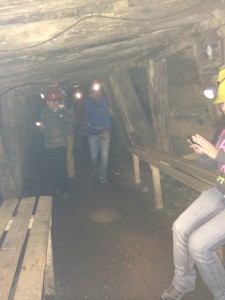 Not much air down here.

The next day we caught round two of what I call “this nasty, never-ending virus.” And while we definitely spent too much time watching CNN and fretting over the state of the world as we were recovering, we also managed to make the best of our low energy.

For one thing, we buckled down to read essays. Before we came to Concepcion, Bill and I both thought long and hard about whether or not to actually assign essays in the classes he was to teach about academic writing. I, for one, voted yes. How can you teach writing without actually asking students to write? As an author, writing is my passion, and while I’m well aware that not everyone loves the writing process, it’s sort of a personal mission of mine to spread the word that, “Hey, writing is fun. You should try it.” So we agreed that we would assign a seven-paragraph essay to be based on interviews students would conduct on topics of their choosing.

Although giving conscientious feedback on so many essays has been an arduous task, reading them has turned out to be the best possible way for US to learn about Chile through the eyes of her up-and-coming generation of educators.

We’ve read essays about the following topics (just to name a few):

Of course we didn’t create our assignment to give ourselves an education about Chile’s social and political issues, but we’ve been delighted that this has been the outcome. We are absolutely impressed at how bright and thoughtful students at the Universidad de Concepcion are. So impressed, in fact, we feel sure that if they represent the quality of the world’s next generation, the future is much brighter than CNN would lead us to believe

These past few days we are gradually feeling better. We’ve been well enough to enjoy meals and get-togethers with new friends—in spite of continued nose-blowing and plenty of “productive coughing” and hacking.

Our new friend Karla had us over on Friday and let us spend the evening with her family (including her two golden retrievers). Then Saturday we enjoyed a gallery show with Cecilia. 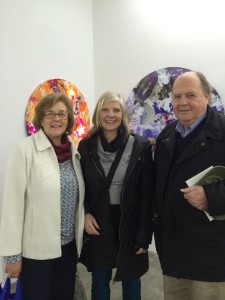 Cecilia and her friend, artista, Marcela Krause, and another friend 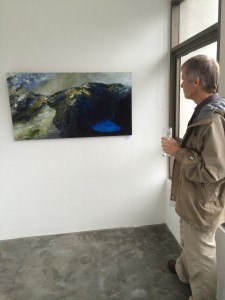 And then later in the day, we drove up and down some steep winding hills with Lilian and her family to reach the fishing town of Tumbes, where we had an awesome lunch. 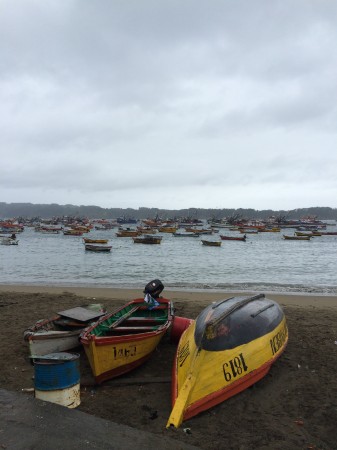 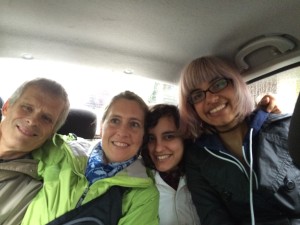 On the ride home from Tumbes. L to R: Bill, moi, Ellie, Laura

Monday night we had the most BEAUTIFUL dinner with Maria Edith and Cecilia. 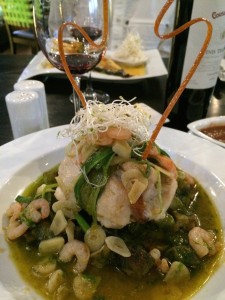 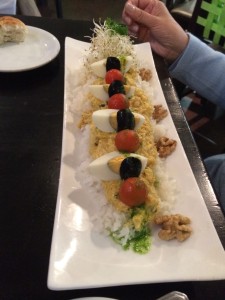 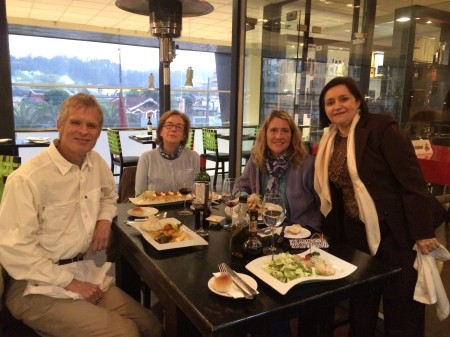 And while I didn’t get pictures of it, yesterday we spent one sweet hour with another Cecilia’s class of life-long learners who ranged between ages 25 and 85!!

Whew! No time to be sick. What fun.