This Week in Tokyo

This morning I took my first–and probably only–run in Tokyo. The temperature was easily 90 by the time Bill and I left our apartment, and the humidity was about 65%. Within a quarter of a mile we were drenched. By the time we’d made it to the park (to see a temple) and back, our clothes were heavy with sweat.

The last few days have been wonderful and packed. After I got back from a three-day trip to chase down a handful of goddesses between Lake Biwa (Japan’s largest lake) and Ise City, I came back to Tokyo to connect with Bill and his wonderful colleagues for the last of their dinners together before most everyone flew back to the States. I’d really wanted to make it back from Nagoya in time to join them because this would be Bill’s last official gathering of any kind with his consortium friends. At the end of this month he retires from his career as Western Washington University’s director of the Asia University America Program, and the people he’s worked with over the past 25 years (staff and students) are the best part of his job. They’re also the part I get to enjoy.

We had a delightful dinner at a Thai restaurant and then went out to karaoke afterwards. I promised Bill I wouldn’t post the video of the reprise of his famous rendition of Back Street Boys’ I Want It That Way, but trust me when I say it was worth seeing. (I, of course, sang I Will Survive by Gloria Gaynor.)

The next morning we hopped out of bed to have coffee with Tokyo friends and then took the train to see Bill’s old friend Norio and his family. Norio had arranged for us to stay in the guest quarters of his daughter’s condo building and to take us out for a most extravagant sushi dinner. I wish I’d taken pictures of all the courses (probably 12 in all) because I’ve never seen nor tasted anything like it. We started with squid, soup, sashimi, and tofu before moving on to more soup, sushi, and tempura. Dinner was capped off with green tea ice cream. Yum! 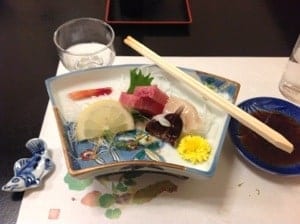 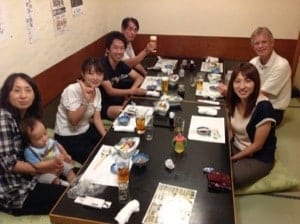 The next morning, still full, we waddled through Tokyo to find three goddesses Norio had identified for me:
1. The Benzai-ten in Ueno park. This is the Japanese version of India’s Saraswati. She’s the goddess of “all that flows” such as music, words, dance, etc. As a writer, it was important for me to go see as many versions of her as I could find (I could use some good-flow karma). In Ueno Park, the statue was smaller than the ones on Chikubushima Island in Lake Biwa, and she was baricaded off by the altar, so I wasn’t able to get very close.

2. Kijibojin at the Zoshigaya Temple. Kijibojin is a goddess who used to eat children but who repented of this and became the protectress of women and children. There’s one statue of her outside the temple (at least I think this is her–I was communicating with the priest in charades).

3. Datsueba near Shinjuku. This bitch is my favorite so far. Her Kanji means “old woman who strips clothes.” Her job is to sit at the edge of the river of the underworld and help souls cross over. If the person who died is an adult, she makes them take off their clothes. She hangs the clothes on the branch of the tree and the extent to which the branch bends reflects the gravity of the person’s sins.

Today after my run, Datsueba would have judged my clothing very heavy indeed.

For the next two days we’ll be spending some quality time with good friends before we head off to a couple of days in Hiroshima.