Bill and the Boston Marathon

Here we are in Boston. This will be my third time watching Bill run the esteemed Boston Marathon. I’d like to brag on him a little bit, if I may. My partner possesses the epitome of the runner’s spirit. Bill started running thirteen years ago when he was 50. His first marathon was in Victoria in the year 2000. Like a lot of people (myself included), Bill started running long distances to deal with depression during a difficult period in his life. At the time, he simply wanted to have the experience of running a marathon, never intending to make it a lifestyle, but his Victoria finishing time was 8 minutes off of the BQ time for his age group and gave him a great sense of accomplishment—much needed encouragement. Shocked and delighted by his success, Bill started training harder and missed qualifying for Boston by one minute in May in the 2001 Vancouver, BC Marathon. But in October of 2001, he qualified by one minute in Portland. Four months later I (re)met Bill. Yay for me! 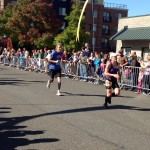 I didn’t go with Bill to his first Boston Marathon experience, but I did get to hear about it, and I’ve been around for the 24 more times he’s qualified and the (now) three more times he will have run in Boston as of this year. What I love about watching Bill run is the abandonment with which he approaches it. If you know him, you know that there’s lot going on inside of my beloved’s head: The well-being of his children, responsibility for his students who’ve traveled from afar for a foreign exchange experience, how the Mariners are stacking up against their opponents…. When Bill runs, and especially when he races, his intentions are set entirely on what he’s doing in the moment. He’s watching and holding his pace, fueling and hydrating, focusing on his strategy. He doesn’t listen to music when he runs, and he doesn’t talk much to other runners. I have an admiration for his single-mindedness, even if it doesn’t suit my style (and is therefore part of the reason that I may never qualify for the Boston Marathon).

I’ll be stationed at mile 17 on Monday watching for Bill and other friends (hi Shandra, Lindsay, Charles and Bev). I’ll be tweeting my way through the day (follow me at twitter.com/camiostman).

As for my training this on this 11th week… I’ve pushed pause while we’re here in Mass., but I got a few good days in before we left.

Sunday: Miserable three-hour run in the pouring-cats-and-dogs-sideways-pelting rain. I was planning on going two more miles than I completed, but I really felt like after three hours I’d proven my point and decided to call it quits.

Tuesday: Speed work. Two minutes at faster than my one-mile pace followed by one minute of recovery, repeated 9 times (so, 27 minutes of this).

Thursday: Driving. No running. Walked around downtown Portsmouth, NH and visited with Bill’s son who lives in the area.

Saturday: Will walk the Freedom Trail in Boston. I’ll wear my Garmin and count the miles but it won’t be anything to write home about.

Watch for my Boston Marathon fan report—probably posted on Monday night or Tuesday.