It’s not very often that I get to attend a 90th birthday party. In fact, I can’t recall ever attending one–before this week. My mother-in-law Dora turned 90 years old earlier this month, and her family converged on her home in the Phoenix area to celebrate with her. 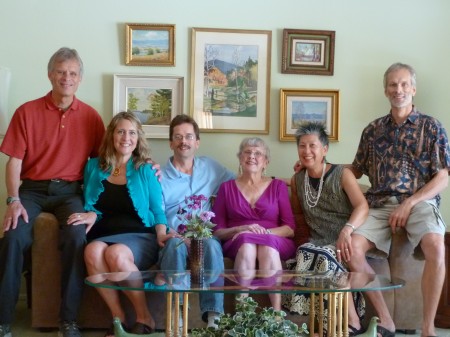 When I posted the above picture on Facebook, friends said, “There’s no way that woman is 90!” We all feel that way. Dora is lively, bright, and opinionated–impossibly energetic (a lot like her son/my husband, come to think of it). When her second son Bob showed the DVD he’d put together of old family movies, Dora plunked herself down on the floor right in front of the screen and needed only a little help to get up again an hour and a half later.

We should all hope to be doing crossword puzzles every day and wearing heals at our birthday party when we’re Dora’s age (I hope to still be running, to tell you the truth). So three cheers for Dora. I appreciate being a part of her family.

That said, as wonderful and celebratory as this week was, I was worried about getting any training in because of the heat in Phoenix. It was 106 degrees. Even at the crack of dawn (which isn’t a time of day I’m typically in operation yet) the temp was over 80! Imagine my delight when I discovered a treadmill in the fitness room at the hotel (said sarcastically–kind of). There’s no shame in falling back on a treadmill now and again.

The air conditioner was set for about 75, which is still hotter than I’m used to, but what the heck? It was my best option. As much as I complain about the clouds in the Northwest, the moderate temperature is perfect for us runners.

Sunday: We were in the air and traveling by car. No running.

Monday: Speed work. 25 mins of one minute hard/one minute of recovery. Put in a total of 6 miles, including the speed work. Entertainment: Good Morning America on the tele.

Wednesday: Pace work. 6 miles. 5 of them a bit faster than my half marathon pace. Entertainment: Disco playlist.

Friday: I was staffing the Red Wheelbarrow Writers’ table at the Chuckanut Writers’ Conference all day. No running.

Saturday: Trail running with the gals. 6 miles on the North Lake Whatcom Trail.

I’m guessing you didn’t attend a 90th birthday this week, but whatever your days held, I hope you were able to celebrate!