I can truly not believe that we are at the end of our time in Concepcion. Three months can shift a person’s perspective, change a mindset. I’m not even really sure how to reflect on this experience in a coherent way, but I’m going to give it shot. I’ll warn you now this’ll be a long blog post (longer than the recommended 800 words).

Bill and I have met something like 200 students in the English department at Universidad de Concepcion. Most of those whom we have met were in classes that Bill led through an essay-writing project (with me assisting). The assignment was to write a seven-paragraph opinion essay based on interviews students did with four interviewees. The topics were meant to be about issues that they were genuinely interested in, things they talk about with their friends over beer. We hope that students learned something from us, but we know we learned from them (see previous post for topics the students covered).

As important to me as the educational aspect of our time with students, however, is the time we had to get to know students on a personal level. Most recently, the Pedagogia Department put on an English Week Congress that really let students and instructors alike shine. I, for one, sat with a lot of warm feelings in my heart as I listened to instructors talk to students with genuine collegiality as they discussed their doctoral dissertations and/or successful projects they’ve done in classes. And students shared their gifts with faculty and classmates in the form of poster sessions and artistic performances. I’m only grateful that Bill’s Fulbright was granted during a time when we could have the opportunity to see the accomplishment of this congress.

Once the congress was over, so were Bill’s official duties. Students from third year threw us a party. 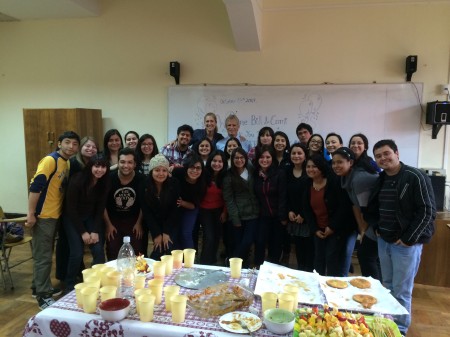 And now we’ve had a chance to hang out with a few students individually. 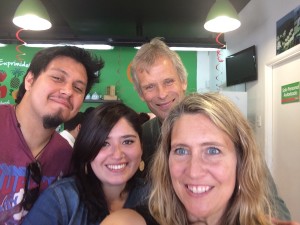 Smoothies with Remigio and Paulina. 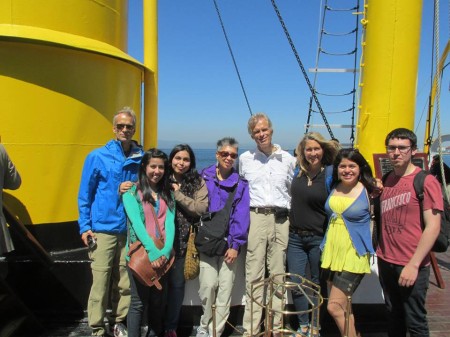 With (R to L): Bob, Camila, Soledad, Leiko, Bill, moi, Conny, & German. Thank you all for teaching us about the Huascar and for spending the day with us!!

And now I’m feeling bereft that we haven’t had the chance to get to know each person in the English Teaching career in a personal way. Dear students, we will never forget you (and if you want to make certain of that, “friend” me on Facebook). I hope you know what a special group you are. Please don’t take for granted the effort your teachers put into helping you grow and learn. They have created an environment unlike any you’ll ever be a part of again, so be sure you truly take advantage of it. In fact, we know you are doing just that because we’ve watched you put yourselves into your studies and your relationships in the department with a whole-hearted commitment. Thank you for welcoming us into your community and for trusting us to be your teachers for a short time, too.

I know I speak for both Bill and me when I say that we’ve cherished our time with new friends. I plan to say thanks individually to those of you who have made this experience meaningful (partly because I’m not sure everyone in the world—especially the professors in the department—wants their name publicly put up on someone’s blog), but one thing I want to say here is that leaving is going to be painful. At the moment, I can barely think about the fact that we only have six days left in Concepcion. How can a place become your home so quickly? How can it climb into your heart so you know it will stay there your whole life? It can happen because people take the time to invite you to coffee or to have lunch with you. Because they take the time to let you sit in their offices and talk about the weekend. It can happen because people trust you with the tender things in their lives; they tell you about themselves and believe that you’ll be kind, that you’ll respect where they are on life’s journey.

During this time in Conce, we have been invited into the lives of those we now think of as friends. Thank you.

Bill ran his first race about three days after we arrived here in Conce. Before we came down here, we tried to find out if there was a running club we could connect with, but Google didn’t direct us to anything useful. Once we got down here however, we discovered Conce Running, Talcahuano Runners, Full Runners, Club Atlético Chiguayante, among other groups. In the last three weeks alone, I’ve done four races (Bill did the first three).

October 12—The Gran Concepcion Half Marathon. 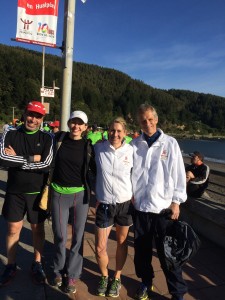 Before the race with Juan, Tania, moi, and Bill

October 19—The BioBio Half Marathon in Los Angeles. 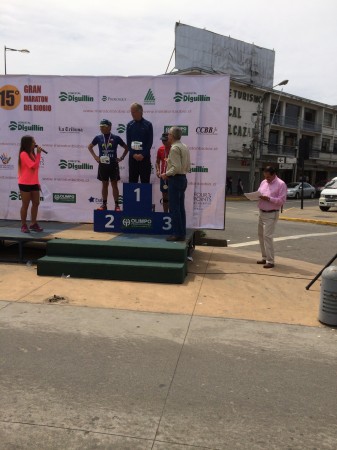 Bill on the podium in Los Angeles, of course!

Yesterday—The Desafio a la Reserva Nacional Nonguen (the National Reserve Challenge): A monster 10K that kicked my ass and took me two hours to complete. Straight UP. Straight DOWN. That is all. 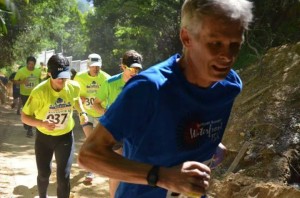 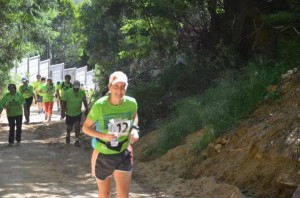 Today—The Corrida Estadio Espanol Chiguayante, 5K (Bill did the 20K yesterday and had blisters too nasty to let him consider running today.) 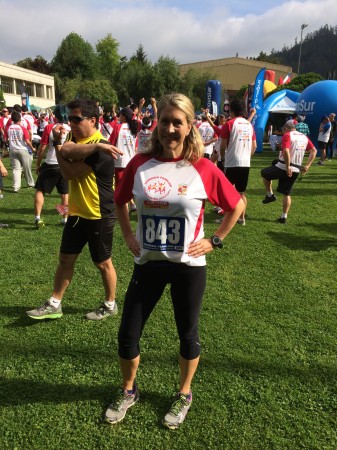 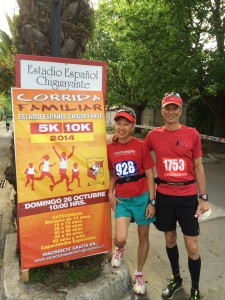 Bill’s brother (Bob) and sister-in-law (Leiko) are visiting us in Chile. They are runners, too!!

What we have learned by doing these races is what we already knew. Runners rock. No matter that we could scarcely understand anything they said, the runners we saw over and over at each race greeted us like old friends with high fives and thumbs up. Runners, if you find your way to my blog, all I have to say is: “Bill y yo queremos agradecer a todos los corredores en el Gran Concepción por su apoyo y amistad. Salimos de Concepción el sábado después de tres meses maravillosos aquí . Si vienes a correr una carrera en el estado de Washington ( en los EE.UU.) , por favor llame a nosotros.” 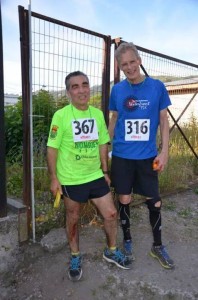 Bill with Benjamin, his prime “competition” who fearlessly flies down hills, after the crazy 20K trail race. 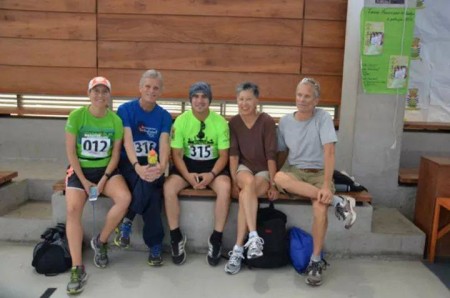 With our new friend Hanss before the trail run.

Concepcion is not a tourist town. This is a place where people live and work and study (and run!). With the exception of three short trips (to Santiago, Punta Arenas, and Los Angeles/Temuco), I’ve stayed in the greater Concepcion area—and made the most of what Gran Concepcion has to offer. Bill and I regularly hopped on busses to get to nearby communities. Talcuahano is my favorite local town—maybe because this is where I ran my first Chilean race, did my first pre-race Zumba, and won my first third-place medal. We also visited Dichato, Tome, Penco, San Pedro, Nonguen, Chiguayante, Hualpen, Coronel, Lota, Lenga, and Tumbes (for pics of these places, you’ll have to come see my slide show when I get back).

And finally, finally, I would be remiss if I didn’t mention my communication experts. Rodrigo met with me twice a week and tried indefatigably to teach me Spanish syntax and pronunciation. In the end, he says I have improved, though I can hardly see it.

My Spanish classmates and our teacher, Elena, have done their best to support me in the journey to be able to function.

But perhaps my best teacher has been Julio, the caretaker at our apartment house. Patiently, and with a lot of good humor, he has interacted with me without a stitch of frustration even when all I can say is, “Lo siento, Julio. No entiendo.”

Geez, is it really time to leave? Fortunately, I plan to come back at the beginning of December to say goodbye one more time.

Concepcion, I love you.