The Notable and the New 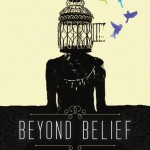 I am bubbling over with excitement. First, you may have heard that the book I edited with Susan Tive, Beyond Belief, was named on The Washington Post’s Notable Nonfiction list. Susan and I are so very grateful that others are finding the volume we all worked so hard on to be a quality book with relevance in our larger cultural discussion. Thank you Washington Post.

I’m also excited about a new book idea I’ve got brewing. And I thought I would share it with you all, not only because I think you might be interested, but also because I’ll appreciate your input. My working title is: Undercover Runners. Let me tell you how my concept for the new book emerged.

As you know, running is central to my identity (like I know it is for many of you). And while I’m too far at the back of the pack to qualify for the esteemed Boston Marathon, my faster and more sure-footed husband, Bill, has qualified several times. Last year, because we were at the Boston race when the bombings occurred, I spent an excruciating twenty minutes waiting for Bill to come out of the runners’ recovery area after I’d heard the explosions, not knowing yet what had happened or if he was okay (he was).

The bombings haunted many of us who were there.

The fact that two young zealots took it upon themselves to destroy so many lives is angering. The fact that they chose to do it at what is arguably one of the most “sacred” events for runners worldwide made the bombings feel personal.

As time passed, I continued to hold the experience of the Boston bombings in my body, feeling the sting of grief every time I thought of what happened, tearing up at the memory of how Boston pulled together to recover after the incident, standing in solidarity with runners everywhere because we were assaulted as a community.

I was deep in the mode of thinking about the “meaning” of running when I took a run one morning with the friend of a friend who was in town for a long weekend. Tacla had spent some time in Egypt while working for the US government. As I was guiding her through Whatcom Falls Park, plodding over roots and rocks and along rolling hills on our heavily wooded trails, she told me about running in Egypt. Where she lived, at least, women runners were not common, and those who did run were not altogether safe. In fact, running was discouraged, undertaken at a woman’s own risk. One woman, she told me, had been forbidden by her father from running on the streets, but she was committed to her running—had somehow discovered that it cleared her mind and made her feel strong—and so she logged her miles by jogging back and forth on the family’s vast veranda. There were no ambling trails in the woods for this woman.

Imagine, I thought, being so committed to running that you would do it secretly, against your family’s better judgment, in spite your very culture and religion if necessary! This one woman across the globe undertook her running as a subversive stand for self-respect.

Just as the Boston bombing has settled into my cells, so has the story of the woman running on her porch. I haven’t been able to stop thinking about her. I wonder how she learned that running “works” to clear life’s cobwebs and how she plucks up the courage to occasionally sneak out and run with friends when no one is watching (as I understand she does). How many other women runners are out there who run secretly—or privately? And what about those “covered” women whose faiths require clothing that would make the sweat and quick movements of running uncomfortable? Who are they? Where do they run? What are their stories? And what if a woman running in any culture IS subversive—because there’s nothing quite like hard physical exertion to teach a woman that she’s strong?

So I’m in the process of interviewing women who run against the tides of their cultures or faiths (even if they stay IN them). I’m looking to understand how, as I don my shorts and t-shirt and take for granted that I can step out onto the trail right outside my door to run alone, some women don’t have that unobstructed freedom to run—but they do it anyhow.

Here’s where I’m asking for your help. If you know a woman who covers because of her faith and runs in her covering… or if you know a woman who for any reason sneaks her runs, I’d love to hear from you. Women who speak to me can be assured that they will be respected AND that they can remain anonymous if they’d like (contact: clostman@live.com).

This site uses Akismet to reduce spam. Learn how your comment data is processed.