Yesterday was glorious. See Jane Run starts at Gas Works Park, the same park where I partied in celebration of graduating from Jr. High School with my 13-year-old classmates in 1980 and where I hung out for barbeques with the homeless youth I used to work with from 2002-05. Indeed, yesterday’s race covered a lot of my old stomping ground. The trail travels past SPU, where I studied for my master’s degree, and through Fremont, one of my favorite places (perhaps the center of the universe actually). In short, I was on familiar soil—and happy to be there. The lake shimmered in the Northwest sunshine. By the time we started the race at 8am, the temperature was easily 70 degrees. Perfect! 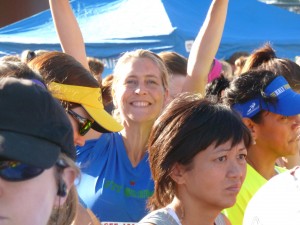 Waiting to Start in Wave 2

This was my third attempt to shave some significant time off of my half-marathon distance. And I have nothing concrete to report yet. Here’s why:

I had agreed to take coach Carol and husband Bill’s advice not to wear my Garmin. They both felt that my GPS was actually shackling me to a slower pace than I could pull off. I think their concern was that if I saw my pace was on target, then I wouldn’t push. It’s a reasonable concern since I’m not known for a competitive nature or a strong need to wear myself out. But I AM known for setting and reaching goals that are meaningful to me, so I decided to give the no-GPS strategy a try as I shot for my new half-marathon goal (2:15 or better). But the See Jane Run race started in three waves, so when I got to the finish line, the time clock read 2:27—which I think represents the start of the first wave. And because I wasn’t wearing a watch, I have no idea how much time there was between the start of the first wave and the second, where I started. The results aren’t up yet. Sigh.

Even without the results, however, I can tell you that I didn’t reach my goal yet. (Sigh again.) The experience of doing a big race (about 800 half marathoners, I think I heard) without a watch or GPS was unusual for me. When the horn blew to start our corral, I tried to feel into my pace, but the crowd pulled me along pretty quickly. And, as you know if you’ve done big races, you get all mushed up at the beginning with other runners and have to push past people with little surges of sprinting just to find the elbow room to run. Thus, the first mile for me was fast. From the second to fourth miles, I have a feeling I was running 9-minute miles—a full minute faster than I wanted to be going—because of the crowd. At mile four I had to take a moment, slow to a walk for about thirty seconds and give myself a pep talk.

“Find your pace,” I said to me. Without my Garmin (or the beat from my music, which I’d also intentionally left behind) I couldn’t settle into a ten-minute pace (I think, I mean, how would I know?). Remember, this pace is new for me, so it’s not as familiar as my old 11:45 standard. I’m just not as easy with what the new pace feels like. The one thing I do know about it is how I breathe when I’m in the right rhythm. So I picked up a run again and tried to focus on the turnover of my feet and the pattern of  breathing I’ve developed in my training.

I kept that up for the next several miles (with the exception of the one big hill between miles 7 and 8). But something really weird happened to me between miles 4 and 10 that I’ve never experienced before. As people passed me (and many, many runners did), I got increasingly anxious. I felt like if I’d put myself in the right corral then those running near me should be running my pace. And since they were passing me, that must mean I was going too slowly. So maybe that meant I should speed up, but whenever I did, I felt I was going too fast and couldn’t sustain it. I’ve NEVER been bothered before when people pass me. The passing runners were stressing me out; I was very disturbed by them.

If you’re competitive, you’ll be like, “Duh, Cami…. That’s how it works! People pass you and you’re supposed to try not to let them.”

Well, excuse me, but I’ve never done it that way. And I didn’t particularly like it yesterday. I really had to focus on my mantra: “Find and keep your own pace.”

By mile 10 I was whipped. I wanted to walk, but instead I told myself to drop to a 12 minute pace. I can do that all day and into the next—and it’s at least a little faster than a 15-minute per mile walk. I jogged most of the last 3 miles, picking up my cadence when I could. I finished right behind my friend Rosie Sporty Diva Coates (see pic below), who had started in the third wave. Her watch told her she’d finished in 2:20. If she started two minutes behind me and I finished one minute behind her, my time might be 2:23. It’s not a bad time for me.

Ce la vie! There’s always another chance around the corner to try again. I’m not disappointed. How can I be? I had a great day in one of my favorite places, and I had the chance to see friends. My number one fan was with me at the start and at the end (thanks, Bill), and I got some great exercise. What’s to be upset about?

Next try: Anacortes Art Dash on Saturday, July 27. I’ll be wearing my Garmin.

P.S., I had some interesting thoughts extrapolating my anxiety response to life in general. Check my Psychology Today Blog later today for a post on that topic.