Well, I ran the best I could yesterday. But the 2013 Honeywagon Half Marathon will not go down as my personal half marathon record. Sigh.

Bill and I drove up to Everson yesterday, grateful for a break in the rain. I was excited to try out my new Luna Moving Comfort Bra 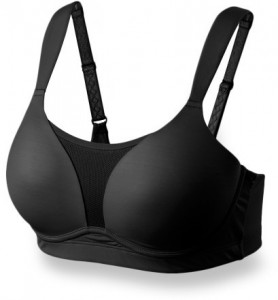 (because I’ve been in search of a sports bra that would prevent chafing and thought I’d found the magic trick with this one).  Just before we left the house, my Garmin 110 stopped working, so I borrowed Bill’s 205, which is set to give the average pace rather than the one-mile “lap” pace. I was bummed about the loss of my own Garmin because I’ve grown to depend on the minute to minute feedback about my pace to help me hold my speed, but there wasn’t much I could do about it.

The first 7 miles, I stayed on target with a 10 minute mile average, but gradually, between the 7 and 10 mile markers, I slowed to a 10:25 average (which would have been fine if I’d been able to keep it there). Then in the last three miles, I was tired, tight, and much slowed by the headwind. For the second week in a row, I found myself feeling like I was running in place for at least a full mile as the wind beat against the mass of my body like it was an ocean wave against a piece of driftwood. I have to admit to fighting with some discouragement as I watched my average pace dip and dip.

“I am pushing it,” I said, knowing that I must be puttering along at five miles an hour. But seriously, I couldn’t go any faster. The wind had blown all my energy away.

Finishing time: 2:22 (according to the Garmin). I felt frustrated for sure, but I want to remind myself (and everyone else who misses their mark–in running or in life) that shooting for a target time is just a grand experiment. There’s nothing at stake here that will make or break life; it’s all for fun to see what can be done when we’re trained up well, nourished appropriately, and adequately rested. In my case, I can see that I held my goal pace a mile beyond the distance I’d trained at that pace. In other words, I haven’t extended my mile repeats beyond six miles. So that’ll be my next step. Also, while I can’t blame everything on the wind, I would love to run a race without it sometime soon. It’s tedious.

So, I’m back to the track and trail to train until I can beat 2:15 in a half marathon. There’s always another chance (I think I say that a lot).

And just in case you were wondering, the girls did fine in the new bra, although there was a tiny bit of chafing from the straps on my shoulders. Nothing’s perfect I guess.

Hope your races this weekend were great!