M is for Memory 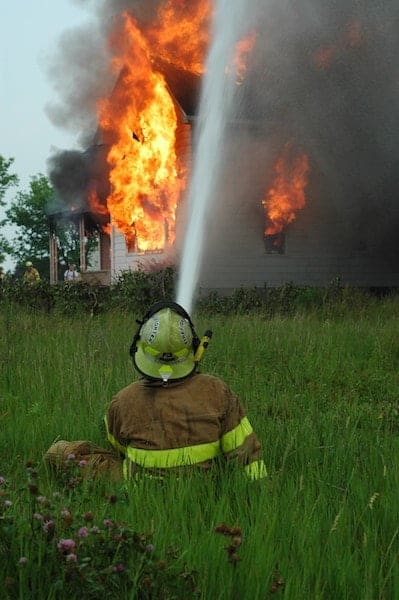 I’ve written a lot over the years about running at the back of the pack in actual races, but I’ve rarely written about being a late bloomer—or a re-bloomer—in real life. As we round the corner into this Christmas season, I’m calling up, as I do every year, the memory of my first serious lesson in set-backs and resilience—because it happened near Christmas.

On the early morning of December 17th, when I was ten years old, I was startled out of sleep by the smell of smoke. At first, I was disoriented in that haze you have before you remember who you are upon waking. And then I felt my dog’s nose nudge my hand, and I fully awoke to my senses. The room had been completely invaded by black plumes. Coughing, I rose from my bed and hurried into my mother’s room next door to mine. She was there with my stepfather and my five-year-old brother, who had been struggling with the croup and had come downstairs to sleep with her some time earlier. My mother was just waking too and registering what was going on.

Our house was on fire.

Flames were engulfing the living room just outside our two bedrooms, blocking access to the front door and quickly eating their way through the entire downstairs area of our two-story house. My mother shuffled me out of her room and back into mine, where she first put the dog out the window, then me, then herself. I watched as my stepfather dropped my little brother to the ground from their window adjacent to mine and then jumped out behind him.

But there was one person not with us. My middle brother, eight-year-old Dane, was trapped in his upstairs room. By now the flames were blocking him from any exit. Below him the fire was burning through the ceiling and would soon combust the living room windows directly below his bedroom.

As my mother, baby brother, and I ran across the street to the neighbor’s house to pound on their door for entry, my stepfather stood outside the burning house and shouted for Dane to jump. It would be his only way out—to leap from two stories up. My stepfather, watching through thick smoke, held out his arms to break Dane’s fall.

Dane jumped, my stepfather somehow preventing him from breaking any bones, and as they backed away from the house to rush to meet us at the neighbor’s home, flames burst out the living room windows. Shortly after that, they would shatter Dane’s window as well and the house would be a complete loss.

My family and the rest of the neighborhood would watch the fire consume everything we’d ever owned. Every piece of clothing, every personal document (quite debilitating before the internet), every family picture, every precious toy, every book… everything.

In the months and years that followed, we would have to start over–COMPLETELY. And I would learn something about resilience that I would carry into the rest of my life. Good thing, too, because I would need that lesson.

Two more times in my life I would lose more than I thought I could bear. Not by fire but by divorce. I’ve walked away from two marriages and left behind homes, belongings, friends, and even dignity, to a certain degree. In these later instances, unlike with the flames that stole away evidence of my early childhood memories, I chose these adult losses. But I walked away from my marriages for the same reason I fled our burning house when I was a child, to save myself—if not my body, some part of my essence that I could not make thrive in the marriages I was in.

And when you lose big, you set yourself back, friends. I think you know what I’m talking about because you’ve surely lost big in your life at some point too. Big losses take a long time to recover from, don’t they?

After the fire, our family was bombarded by kindness from our community. The newspaper wrote an article about our fire and strangers arrived at my grandparent’s house, where we slept on the floor through the holiday season, with boxes of clothing, toys, and practical household goods. One man who shouldn’t have been driving, arrived drunk one night with an orange and white striped sock full of coins for my baby brother. He’d learned from the newspaper that the child had lost his “penny collection” and was bringing his poker winnings to soothe that loss.

Eventually, my family found a rental home where we gratefully lived with other people’s hand-me-downs and gifts until our home was rebuilt.

In my adult re-building processes, I’ve followed a very similar course: leaning on the generosity of others until my own sense of home was reestablished.

This year I am celebrating my first holiday season in my own home. I’m still moving in so my holiday decorations are sparse, most of them still hiding in boxes somewhere in my garage, but my sense of stability is on display when you walk in the door. I’m a late bloomer to owning a home with JUST MY NAME on it. To feeling like I have something I’m the boss of. I’m a late bloomer, too, to an experience of autonomy and self-love, but that’s coming.

The marathons I’ve run over the years have taught me that I’m a pretty tenacious bad-ass, but that early loss—consuming fire that took away everything—is what taught me to be a Phoenix.

Would love to know what tragedy gave you your big lesson and how you’ve risen from the ashes, dear one. As we round into this new year, let’s celebrate our resilience!