Long distance running humbles you; it reminds you that you’re mortal. You wake up the morning of a marathon feeling prepared and excited about your race. But when you finally meet her, the one you’ve been waiting for for months and months, the marathon says to you, “Hey, you think you’re ready for me? Well take a look at this hill. And this one. And this big one here. Oh, sure, you’ve done your training, but don’t get too big for your spandex britches, my dear. I’ve got 26.2 miles to teach you a thing or two about endurance.”

And so it went for me yesterday. After training for all of 2013 to shave an hour off my marathon finishing time, I came in–as usual–right around 5:30. Don’t ask me my exact time. You can look it up if you’re inclined. I think it was 5:36ish. What’s most important is that I would like to register my sincere apologies to Texas–and to Austin in particular–for calling it “flat.” Even after we arrived in Austin on Friday, I continued to think, “Where are the hills everyone keeps telling me about?” Well, now I can tell you where they are. They are on miles six through fifteen of the marathon course. I bow in respect to them, ask forgiveness for scoffing at those who told me the Austin Marathon would be hilly, and commit to adding hill repeats to my training regimen. Amen.

Yesterday, I arrived at the starting line with the Fit School women, anxious to do my first marathon in over a year. The thrum of excitement vibrated in the air at the State Capital. 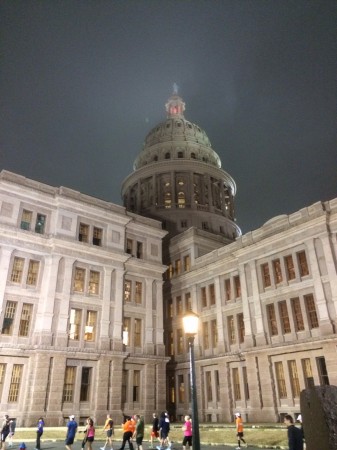 The air was warm and humid; we all glistened with moist anticipation. I positioned myself directly behind the 4:40 pacers, hoping I could hold with their 10:41 pace until the course flattened out at mile 18–where I would then surge forward and pick up my pace. Ha!

For the first six miles I was solid. Though the humidity in the air was more than I’m used to, I felt good. Even the plantar fasciitis I’ve been fighting with seemed to go into temporary remission. Right around mile seven, the hills started. As long as an UP was followed by a DOWN I didn’t lag too far behind the pacers, but once the UPs were followed up by other UPs, I began to watch my pacers drift farther and farther into the distance ahead of me. Eventually I lost sight of them.

The Austin Marathon, though tough, is also one of be most well-attended (by spectators) races I’ve ever done. So, while I was lagging behind my intended pace, I was loving the atmosphere. The course winds through several neighborhoods where people set up lawn chairs and signage and settle in for the whole morning. And Austin is a dog town! In fact, one of my fellow Bellinghamsters, Mayumi, told us later that she passed the time by counting black dogs. If you know me at all, you know that seeing dogs out on a race course gives me little bursts of oxytocin (which, sadly, doesn’t make me faster, but it does make me happier). It seemed like there was one dog for every two human spectators along the course. What’s not to love, even if you are struggling with a hill or two–or ten?

The fans at this race had the best energy I’ve ever seen. “Hit this spot for more power,” one sign said, with a big star outlined right in the middle. “Quitters get your margaritas here.” “Smile if you’re not wearing underwear.” “Run like you stole something,” one little two-year-old boy’s sign read. And then there was the guy in the Michigan sweatshirt who met his runner (right behind me) at least seven times on the course and played the song “Eye of the Tiger” at every appearance he made.

But even love from a happy crowd couldn’t help me hold my pace beyond the half-way point. At mile 16 I had to stop to stretch and rub out a cramp in my left quad. At mile 18 I saw the 4:55 pacers pass me. When I couldn’t keep up with even them, I knew my last eight miles would be hard and slow. I could see that I wouldn’t be getting a PR, or even coming in under five hours.

Do you know that moment when you have to surrender to NOT achieving what you hoped you would? Not getting what you want? In those moments you have to give yourself a good think. Will you berate yourself, whisper hateful, angry self-recriminations? Or will you turn toward metaphor and try to listen for what the experience can teach you? I don’t know about you, but I’ve spent too many years of my life feeling sorry for myself and internally lashing out. So I don’t do that anymore. I listen for what I can learn. In a practical sense, what I learned is what I mentioned earlier: I need to add hill work to my training. But in a wider view, I understood that some things (in my case yesterday, it was the marathon) never get easier. I started thinking about areas of disagreement I have with loved ones or sadness I feel about losses I’ve experienced throughout my life. No, some things never do get easier. You just regroup, recover, start training again, and go back in when you’re ready. I knew this was what I’d have to do after missing my mark yesterday.

Determined to take what I could from the run, in spite of my disappointment, I presssed forward. Slowly. At mile 26, my friends Carol, Julie, and Leah cheered for me from the sidelines and gave me the boost I needed to get up the last 800 meter hill before dropping in for the finish line.

Thanks to all who followed the journey to improve my marathon time. I guess I’m not there yet–but we don’t always reach our goals on the first try, do we?

And thank you Austin Marathon! You kicked my ass, but I love you anyway. 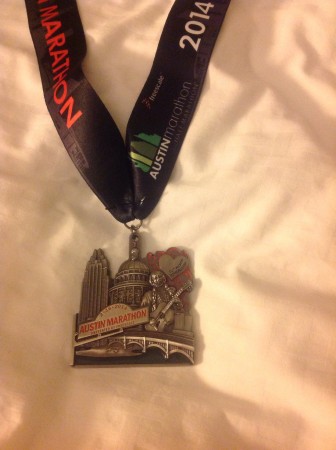