First day back running AND blogging. Hope no one has been waiting on pins and needles for the Tri-Cities marathon relay report. Here it is.

I took the first leg of the race and for six miles I maintained about a 10:20 average–a few seconds slower than the 10:17 I needed in order to meet Bill at the halfway exchange by my 2 hours and 15 minutes goal. Bill waited for me at mile 6.8 to take pictures and to check in with my progress. Apparently, even with his glasses on he mistook this woman for me and took several great shots of her until she got close enough for him to see that she was someone else’s wife. 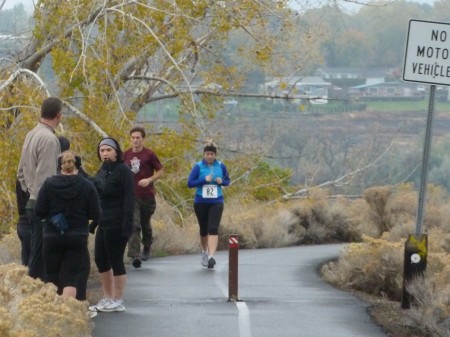 He claims her running style is exactly like mine. If you know who she is, let her know we have pictures for her. 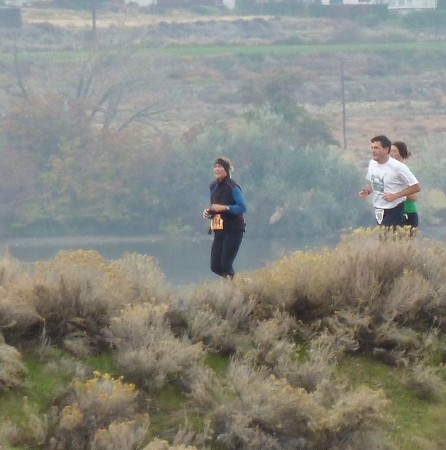 After the seven mile mark, I slowed down. Most of my remaining miles were run at my usual average, and I met Bill to pass on the timing chip in 2:23. Contrary to his pre-race jesting (that he was going to walk it in if I didn’t reach him in 2:15), he ran hard and completed his half in 1:49, only four minutes slower than his goal. We ran this marathon, jointly, in 4:11:56. That’s my fastest 42K! 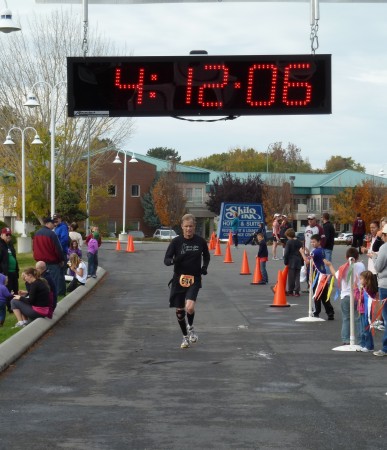 Bill, the Anchor (in the race and in my life)

In retrospect, I think I started too fast. My first mile was under 10 minutes and I just couldn’t keep it up. I’ve got a lot to learn about being a strategic runner. Most often my only goal has been to have fun. This wasn’t so fun for me, but I’m still committed to gaining some skill and strategy in my running, banking on the idea that once I do, I’ll actually have MORE fun than ever before.

Oh, and true to his word, Bill took me on a little wine tour en route to and from the race. We picked up some yummy wines from Airfield Estates, Desert Wind, and Hogue Cellars, among others. Cheers.