With the Arizona Road Racers 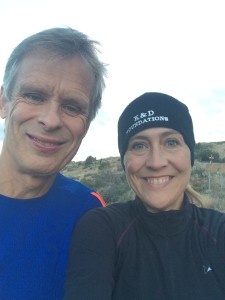 Yesterday we joined a group of Arizona Road Racers for their 18-mile Mazatzal Trail Run out by the little non-existent town of Sunflower—about an hour and fifteen minutes away from Bill’s mom’s house. The course was to be a loop on mountain roads and trails with a barbeque afterwards back at our starting point. For fifteen bucks.

I’ve been training, as you know, mostly on the track or on the well-used not-very-technical trails around our town in the past several months, so I was excited to do a rugged run—something that would challenge my sense of balance and get me into the desert mountains. Bill had found this race on the Arizona Road Racers club website, which he follows closely since we come to see his mom a couple of times a year (and hint: if you’re traveling and looking for races or casual runs to take part in, the local club’s website is the first best place to look). 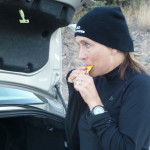 The race started on 8 miles of dirt road that mostly wound up, up, up into the mountains. I’m not a strong up-hill runner, so while I watched the experienced Arizona trail runners (not to mention my own beloved) jog up the switchbacks, much of this was a fast walk for me, interspersed with running when I could catch my breath. We climbed 2000 feet of elevation before all was said and done. That put us about 6000 feet in the air; I could feel this in my lungs, running mostly at sea level as I do. 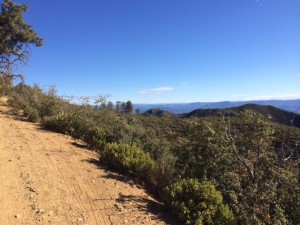 The one and only aid station was 8.3 miles in. As I reached it, I noticed that several runners were turning around and heading back the way we’d come rather than carrying on to complete the rest of the loop, and I was tempted to do the same since I knew most of the return trip would be downhill. But I also knew that the trail running hadn’t really started yet, and I wanted to see what was ahead of me. If I’d known what the rest of the course was like, I would have turned back. It’s always better that we don’t know what’s ahead of us in life, don’t you think?

When I bade adieu to the folks at the aid station, there were two runners behind me (there were only 29 runners in all and I was among the 5 or 6 oldest in the group for sure). Off the road now, we would be strictly on trail—or so I thought. Apparently there HAD BEEN a trail the year before, but the rains had come and washed out most of what you could call a real trail. The route was marked with yellow and blue ribbons hanging from trees or on stumps or cactus. Yellow for “yes, go this way,” and blue for “don’t go here.”

Before I was far into the most rugged portion of the course, the two runners behind me passed me up, and I knew I would be on my own out in the middle of bear country for the better part of three more hours (I’d estimated the run would take me 5 hours at the longest). There was bear shit everywhere, much of it fresh, and when one of the other runners at the aid station asked if I was wearing bells, I got sort of freaked out. But the course would keep my mind on task. It was dangerous enough without bears.

I wish I’d stopped to take pictures of the terrain. The next two hours were literally unrunnable for me. A “trail run” in my Northwest world is soft, wet, rooty, and rocky, yes, but not populated with cactus and “waitaminute” bushes. Yesterday there was a lot of loose rock underfoot, and above the ground the brush had overgrown what trail there was with stickery plants that grabbed hold of my clothes and required me to come to a dead stop to untangle myself a few times.

When the route finally dropped directly into a dry riverbed, I felt relieved that the blood on my legs would have a chance to dry. Little did I know that the hardest part of the course was still ahead. Apparently, because some of the trail had washed out beside the river, the race directors had decided to keep runners in the bottom of the river bed for a few miles. I’ve never run on rounded river rocks before, and I couldn’t tell which rocks were stable and which weren’t. If I picked my way through as carefully as my instinct told me I should, I’d be putting in 25 minute miles, so I tried to run—which was a mistake. Just before mile 12, I caught an unstable rock with my left foot and when my right foot landed to try and bring my balance back, it got stuck between two rocks and I tumbled and fell and twisted my right ankle.

Sitting on the floor of the river bed, I assessed the damage. I could move the ankle and, although it was sore, I didn’t sprain it. So I got up and carried on. But I was frazzled, which is probably why I didn’t see two blue ribbons that in the breeze had wound themselves around the branches they were tied to. I wandered off course for about 12 minutes before I started to go into full-on panic. My new iPhone was useless since there was no reception, and as I backtracked, trying to find the last yellow ribbon I’d passed, I started to cry—only briefly.

I knew I had to keep my wits, so I talked myself down with “C’mon girl, your worst case scenario is that you find the last yellow ribbon and sit there until someone comes to find you. Not your ideal day, but you won’t die.” I knew if I were out on the course for longer than 6 hours, Bill would worry and send someone after me. 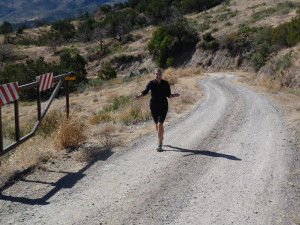 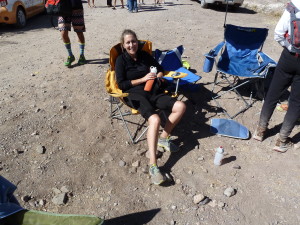 I did find my way. And with six more miles to go, I managed to complete the run in one piece (and dead last, too, but what the heck—who cares?!). I’ll say this, Arizona trail runners are a tough lot! I’m impressed and humbled. And pretty sore, too.