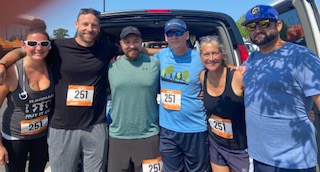 So, seriously—and I’m not exaggerating—the isolation during the lockdown nearly pushed me over the edge. I followed all the rules the best I could and did my part to prevent the spread of the bug that took our known lives away from us (and hundreds of thousands of our actual lives away from us in the U.S.) for 18 months, but I suffered. Alone for many weeks at a time without any kind of human touch… The only people whose eyes I might see in 3D would be the people at the grocery store. And, personal issues aside (which didn’t go away just because we were in quarantine, right?), depression set in from a sheer sense of abandonment (doesn’t have to be reasonable… it just IS what happened for me).

So… post vaccination… when Greg contacted me and asked me if I wanted to be a pick-up runner for a Ragnar Relay team (if you don’t know what Ragnar is, check out the deets here) this July, I said, “Um… fuck yes, thank you.”

I know Greg from Bellingham Sister Cities events years ago, and he knew from social media that I’d put out a call for Ragnar runners to try and build a team earlier in 2021. I hadn’t had enough responses and, depressed as I was, I didn’t push to make it happen. When a friend of Greg’s had a couple of late dropouts from her team, he jumped into one of the openings and reached out to me to fill the second empty spot.

I didn’t know anyone on the team except Greg (and didn’t know him well), but I didn’t care. I wanted to run Ragnar and made my decision that NO MATTER WHAT the people on the team were like—whiners with entitled attitudes, hard core competitors who have contempt for people who run at my pace, or little old ladies who run twice as slow as I do—I would decide to have a good attitude and enjoy being in a van with 5 other human beings simply for the sake of the human contact, if nothing else.

Lucky for me… I hit the jackpot.

By some weird karmic intervention, I got on a team with the five most delightful humans that could end up together in one giant white van for 36 hours of craziness.

I arrived at Bellingham High School, our meeting point, two hours earlier than I needed to be there because of how excited I was. I’ve run Ragnar twice before, and I’ve always been in the second van. The second van gets to sleep in on the Friday morning the 200-ish-mile relay starts, but they also have to (get to?) run all through the dark while van ONE snoozes through most of the night. I needn’t have been there so early but I was pacing around my friend’s house where I stayed the night before and she finally said, “Shall I take you down there? Get you out of my hair?”

Amy arrived first and introduced herself to me. She was the only other woman in our van (I’ve never run on a mixed gender team, btw), so I knew we would be sisters in a sea of testosterone. Then the other Van TWO team members arrived: Greg, of course, and then Joe, Elliot (our captain), and Gilbert (our caboose).

Amy was to run first, so she was geared up and standing at the exchange point as I decorated the van with our team name: “Ruck Funning!”

Once the other five of us were in the van together, I felt I was instantly in heaven—like I was the person I used to be when people were allowed to be near each other. To be in close proximity with other humans made me quickly realize what I’d been missing: people talking over one another, listening to music and raising one’s voice to be heard, apologizing for bumping into each other, accommodating other people’s belongings and need for space. Really… everything about the messy joy of smooshing together with other homo-sapiens. I’ve been known to say to friends (on the phone) during quarantine that I’d pay any amount of money for a mosh pit (to which those who’ve been IN mosh pits assured me the pits were dangerous, and I wouldn’t really like them as much as I think I would). What I’d TRULY been craving was personalities with bodies, close enough to breathe each other’s air.

And while I know to a lot of people, the idea of being in other people’s air space still feels frightening (and I respect that), I love being in crowds near enough to feel other people’s body heat, and I’d missed it like a fish misses water when she’s been yanked out on a hook.

Joe took over from Amy at our first exchange, and the van advanced to where I would take my own first leg of the relay. The sun was shining and delivered us a perfect mid-seventies day. Not too hot, but there were a lot of hills. When Joe crested his final hill and was near our transfer, I could see the course and the warmth had been at least a little bit of a challenge for him and hoped I was up to snuff for my leg, but I didn’t fret. Nothing was at stake. We were here for fun.

And once I had the baton, I was almost literally orgasmic with joy of TAKING PART IN A RUNNING EVENT.

Oh my god, the failure to thrive… the joyless, lifeless days on end of waiting to be able to go to a concert or stand at a starting line or talk close up over a glass of wine at a restaurant. As I ran, my grief melted away… just let itself fall off me on the road with every footfall. There weren’t so many runners out on the course as in previous years because the number of teams was under 250 (just as a point of reference, when I ran the race in 2017, there were more than double that number of teams), but to be out there with even a FEW felt like meeting old beloved friends at a high school reunion.

Our next three runners took their turns and then we camped out for a few hours at Joe’s friends’ house, which was right on the course, to wait for Van ONE to do their work. Then we took over to run through the night.

I’ll spare you the blow by blow of the whole rest of the race, but here are my favorite highlights:

Anyway… I don’t know what the Delta Variant is going to do, but I know this: I needed that relay. I wasn’t doing well. And now I am. Thanks Ruck Funning!! I love you all.