I flew down to Southern California with five friends: three women who live in my neighborhood and two from Seattle. My three neighbors and I were needled by the security man at the Bellingham airport as he examined our drivers’ licenses when we checked in. “Hmm. Looks like some kind of a Wisteria Lane deal. Where are you desperate housewives headed?” he asked. Neither desperate, nor housewives, we graciously explained that we were bound for Disneyland for the Tinker Bell Half Marathon and a bit of sun.

The trip was the brainchild of my dear friend Sharon who decided she wanted to run her first half marathon, but it had to be a Run Disney event! She loves Disney characters and Tink, with all her spunk, is one of her favorites. Always in favor of supporting friends in the process of discovering running, I invited myself along and encouraged my neighbors to join us.  We found a hotel right outside of the park’s main gate, bought ourselves some Nuu Muus so we’d look like a team, persuaded my husband, Bill, to dog sit in our absence, and off we went. 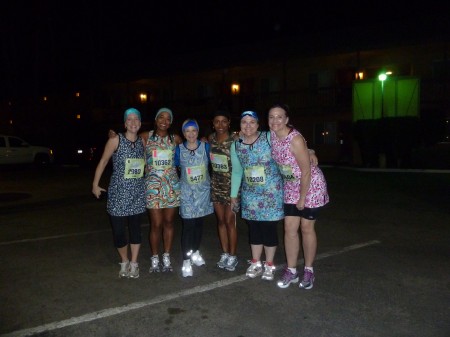 At 5:50 am Sunday morning, Tinker Bell said, “Go,” and the crowd of 12,000 (mostly) women shuffled across the starting line. At this point, I’m no novice to half marathons—large and small—but I’m still rattled just a little by the crush of bodies trying to elbow space enough to put one foot in front of the other at these large, commercial events. The Tinker Bell run was no exception.

My pals and I were in the second corral; it took about six minutes to reach the starting line and three miles to find enough room to get some kind of consistent cadence going. At the start of the race, the six of us ran side by side briefly and then broke off into twos. Sharon and her sister, Julie E, fell back quickly as we’d expected. Their goal was to come in under the 3.5 hour cutoff point if possible and ultimately to finish the race without getting swept from the course. Julie M usually runs with me, but within a mile, I could no longer see her and our neighbor, Sonia, in the crowd behind me. I realized that looking back to search for them was asking to be tripped by someone in front of me and gave up. Occasionally, a runner in front of me would come to a dead stop and cut out of the stream of traffic to have her picture taken with Mickey or Buzz Light Year or some other fictitious creature. I tried not to mind the herky jerky nature of the event, but caught myself grumbling just a little. Sonia’s sister, Alisa, tracked with me for about 6 miles before I lost sight of her, too.

Even with the obstacles I appreciated that the route was almost perfectly flat, the temperature extremely moderate and the hype and energy of the crowd exceedingly cheerful.  And to the credit of the event planners, everything was in place. Aid stations were plentiful; the volunteers were numerous; the course was well marked; and there was plenty of roadside entertainment.

Finally able to find the space to stretch to my full stride after the sixth mile, I got into a groove and enjoyed the numerous local high school cheer squads and bands stationed along the route through downtown Anaheim.  I looked at my Garmin and realized that my second 5K was very respectable and much faster than the first 5K when I’d been battling the hordes. Feeling I had it in me to keep up a 10:30 pace for the remaining miles if I didn’t get tripped, I pushed myself hard through the next four miles. At mile 10 I misread both my Garmin and the mile marker and thought I was at mile 11. “I could get a PR!” I said to myself, picked up my pace and panted through the next mile expectantly, hoping I could cross the line in about 2:10. When I saw the next mile marker read “11” and verified it with my Garmin, I’ll admit that the wind was taken out of my sail just a bit. I’m not sure how I’d misread both the road sign and my GPS but… oh well. Easy come; easy go.  Still if I kept up my pace, I would get in the best half marathon I’d run since I was in my 20s, so I gave it my best.

Elated, and proud of my effort, I collected my medal and a bottle of water and then realized… I was alone (I mean, so to speak). All my friends were still on the course. Turning back around to go wait by the finish line was a no go, unfortunately. I was hustled and jostled by volunteers insisting that I move on into the recovery area. I had to sidestep them and wiggle in behind the kids handing out emergency blankets to get a view of the finish.

(A little commentary: Although my own race was good, and I achieved a midlife half marathon PR, I felt immediately dehumanized once I crossed the finish line. No one cared that I wanted to scream when Sharon and Julie E finished their first half or that I wanted to watch for Julie M, Sonia, and Alisa, who were only minutes behind me. With twelve thousand runners, there’s no room for individual stories or the meeting of personal needs. And although this was billed as a girlfriends’ event and women were encouraged to sign up in teams, there seemed to be no accommodating of those teams as they tried to support one another in their respective goals.)

Ignoring all warnings to move on, I waited by the finish line as invisible as I could make myself for fifteen minutes until Alisa spotted me. It’s a good thing I stayed put where she could find me because she got lightheaded once she stopped running and needed to spend some time in the medical tent rehydrating and resting. In the midst of keeping one eye on Alisa and another eye on the finish line for the others, not only did I miss seeing EVERY one of my friends cross, but I eventually lost them in the crowd and never reunited with them—even at the designated meeting spot we’d agreed upon before the race.

Head hanging low, I wandered back to my hotel room by myself where I waited for my five pals to return and regale me with stories of aching muscles and Rapunzel sightings. (BTW, here are the others’ finish times: Sharon–3:52, Alisa–2:34, Sonia–2:59, Julie E–3:52, & Julie M–2:59.)

Overall, I’d give the inaugural Tinker Bell Half Marathon an A for organization, energy, and fun, but I’ve learned my lesson about the mega races. I’m sure I’ll do more of them, because they do offer a fully loaded experience from expo to finish, but they don’t give much of a personal touch, and you have to be prepared to be alone in a crowd. 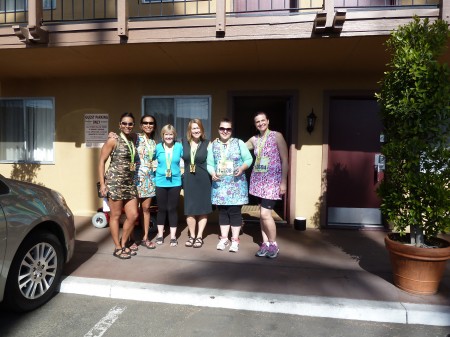 After the race with our Tinker Bell medals