This morning Bill and I were out the door by 8am and registered for the Smelt run by 8:55. We warmed up, stood in line for the toilets, pinned on our race numbers, and then huddled with all of the other Smelt runners at the starting line. As you know, I’ve been training to beat an hour in a 10K (don’t quote me on this, but I think my PR up until this weekend was 1:04).

As the race started, I pushed the timer on my my Garmin. After much debate about whether or not to wear my watch, I decided I wanted to know what my pace was as I progressed through the race, so I wore it. I’ve heard that some people run better without their watches/GPS contraptions, and I can well imagine that being true for me, but I’ve developed a reliance on knowing my speed and distance at all times, so… like I said, I wore it.

Mile 1 was good. I ran it in 9:08 and felt fine. Mile two was 9:18. I slowed down a bit for miles 3 and 4, but I was still in the ballpark of my goal pace.  But the wind was really brutal and mile 5 was super slow. I didn’t feel tired, necessarily, but I did feel like I was running at the bottom of a swimming pool. Even a good mile 6 couldn’t make up for the time I lost in mile 5 and when I crossed the line, the clock read 1:00:21.

Twenty-two seconds slower than I’d hoped, but this 10K was still my personal best and it was still darn close to my target time.

In running as in life, imperfect will sometimes have to be good enough. And in running as in life, there’s usually another chance to try to reach our marks. Bill is looking for my next 10 K, but I don’t have time to think about it right now because next week I have a half marathon to run and I’m trying to beat 2:15 in that race.

Thanks to everyone who cheered for me virtually and out on the course.  Would love to hear how your races went this weekend. Cheers! 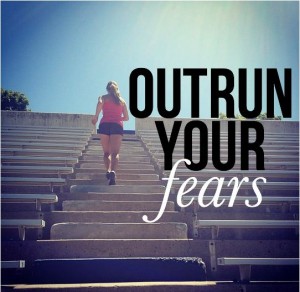