Have a seat and grab a cup of joe. I have SO many updates. But I’ll post pics to keep you interested.

Last Thursday Bill and I flew up to Santiago for a Fulbright function. He needed to make a presentation about his project in front of the Fulbright staff and six other Fulbright grantees. 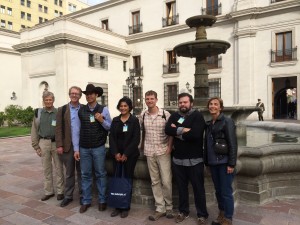 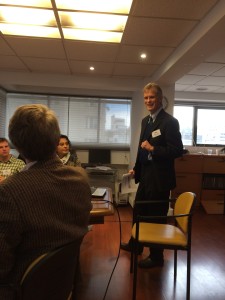 And then the Fulbright staff wined and dined us all for a couple of days. Needless to day, Bill did a fabulous job and made special mention of Lilian Gomez, Maria Edith Larenas, and Marcela Cabrera, the three women who have been the backbone of his/our experience. One thing we learned from sitting in on other presentations is that in Chile, someone based at the local university really must champion the presence of a Fulbright scholar in order for the commission to approve him or her. We are so grateful to those who championed Bill’s application!

After Bill’s presentation, he and I walked to the Parque Metropolitano and took the funicular up to see the Virgen Cumbre (the Virgin’s Summit). The view was… what can I say? Mind-boggling! A city of over 6 million people must be big, of course, but down inside any given barrio, a person can never get a sense of the breadth such a number must mean to an area. Look at this city! If it weren’t for the Andes Mountains, it would spread out in every direction.

The day after the presentations, Fulbright took us all out to lunch and on a tour of the Palacio de Moneda where the president of Chile has her office (notice I said “her?” Did you know that Chile, Argentina, and Brazil all have female presidents? Let’s get with the program USA). The Palacio de Moneda was once Chile’s mint, and is also the place from which Salvador Allende was ousted on September 11, 1973. The Chileans feel that September 11th is a truly worrisome day, so most years the Palacio closes down on the date.

We flew home in a happy exhaustion, rested yesterday, and then got up early today to make our way by bus to a nearby town called Talcahuano for a race. Bill had tried for two weeks to get us registered for the 10K in Talcahuano, but the website seemingly wouldn’t accept foreign credit cards so each attempt failed. Finally, out of sheer defeat, he signed us up for the free 3K so we could at least have the experience of being at the race. When we went to the mall to pick up our numbers, we were told that the free race didn’t have any numbers; it was just a fun run. BUT, we could sign up for the 10K in person and pay cash for our numbers if we wanted to. So we did.

Talcahuano was leveled by the tsunami (they’re called “maremotos” here) after the 2010 earthquake, and much of the town is still in the process of being rebuilt.

The pier where the race started was new–fresh bricks on the ground and new buildings along the edge of the water–but across the street the buildings are still crumbling and some of the roads are broken to pieces.

You can see from my video that Talcahuano is a fishing town. Colorful houses and boats flank the shoreline. It is also the site of one of Chile’s major naval bases.

…where dogs and sea lions co-exist, if not co-mingle.

The race itself didn’t have a remarkably interesting course. An out-and-back entirely on the road, this was a pretty straightforward, flat 10K, but what WAS very cool was the energy of the event. Runners warmed up with 20 minutes of Zumba (which I love).

And then they cooled us down with more Zumba after the race. 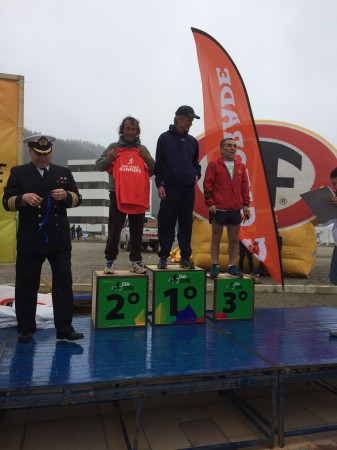 …and I won THIRD place in my division (there might have only been three 47ish females in the race, but what the heck). You can see in the picture below that one of the military leaders (on the right) was present to present medals and the mayor (the man in the blue coat on the left) congratulated runners as well. What an honor! 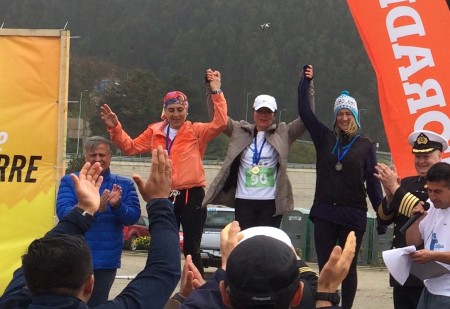 Some other random pics of our race day: 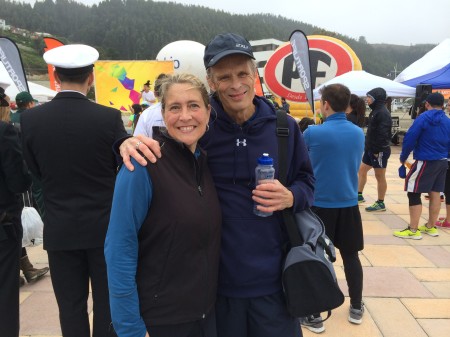 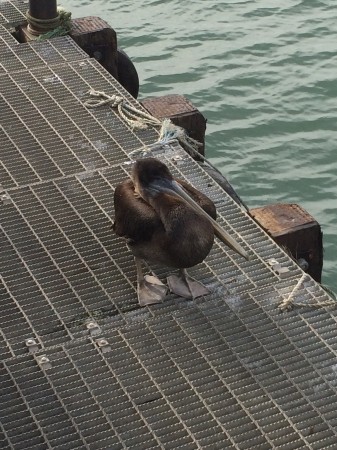 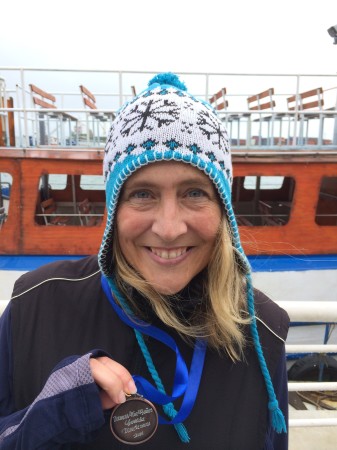