Samantha Cooper, Guest Blog on the Seattle Rock and Roll Half Marathon

My friend, Samantha Cooper, decided early in the year that she wanted to run a half marathon. She’s been keeping us updated through her training and up to race day. Here is her brief race report with thoughts for “next time” (I love to hear people talking about the next time). I hope you’ll join me in congratulating her on her amazing accomplishment. For those of us who’ve been been running for a few years, it’s easy to forget what the first race was like. Let Samantha’s experience be a breath of fresh air for us all. 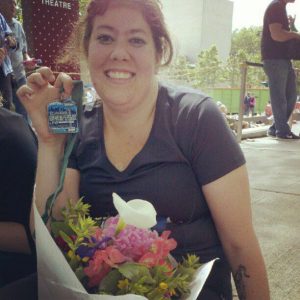 I ran the Seattle Rock ‘n’ Roll Half Marathon on Saturday, June 23rd. People keep asking me how it went and the only words I seem to be able to get out, even a week later, is ‘I did it!’ I ran the whole 13.1 miles (which was my original goal–to run the whole thing) at a pace of about 12:30 minutes per mile for a total time of 2:46:20. My final time was a little slower than I would have liked it to be but faster than the finish time I put down when I signed up to run the race. My pace at the beginning of the race was closer to 11 minutes per mile. When I hit Mile 8, I was excited because it still felt pretty good to be running. Although, also starting about Mile 8, my pace slowed down and by Mile 10, it slowed down significantly. Miles 10 to 12 were incredibly difficult for me, being on the Viaduct with no shade and the day getting warmer. I was pretty frustrated at that point. I would say my pace picked up a bit for the last 1.1 mile though, and I finished by jumping across the finish line.

I can’t say it’s the most fun 2 hours and 45 minutes I’ve ever spent. BUT I feel so incredibly accomplished and triumphant. I do plan on doing another half marathon…I’m contemplating doing the Seattle Half Marathon in November. Next time, though, I think I need to plan out my hydration a bit better. I stopped at every station but I didn’t have a plan at all as how to properly hydrate. I’ll have to have more supplies with me as well. At least one more packet of GU. I also will want to get in at least one extra 10+ mile run before the race; I only had one under my belt this time around.

I have grown to really like running and all it teaches me. What a great challenge.