Well, I’ll be honest with you. Today I would have sold Bill for an hour at a Starbucks. I was feeling a little homesick sitting at our apartment, wishing I had a coffee haunt to hang out in and loiter unmolested with my computer open for a little while. And then I went up to the university to see Bill and I bumped into Pablo, one of my favorite teachers in the English department. I suddenly felt sad that we are half-way through our Fulbright time here in Concepcion. Can you belong to two places? I’m starting to feel that I could.

This last weekend Bill and I went with another Fulbright family to Punta de Parra to run a trail race. Every year at this time, we participate in the Fairhaven Waterfront 15 K in Bellingham, and this year we were sad to miss the event. So Bill found a 14 K by the water out near Tome (with an accent on the “e” but I don’t know how to do that on my keyboard) to fill our need to run in the sun along the coast. Scott (who is doing his Fulbright at U de C in geology) and his wife Tania and children (Dominick, 7, and Elena, 4) joined us so Tania could participate in the race too.

My foot is still bothering me (people, why??), so I only signed up for the 7 K trail run. We had a super gorgeous day. 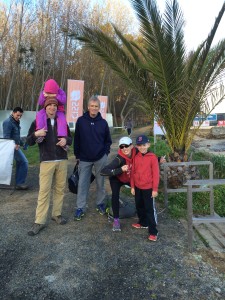 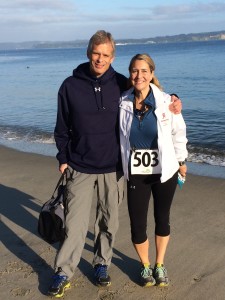 Here we are before the race!

I’m glad, to tell you the truth, that I only signed up for the 7 K because the course was a double lollipop with a monster one-mile long hill right in the middle. Those of you who know me know that I’ve never met a hill I loved, so once is always enough. The course started right on the sandy beach and then went along a trail for almost a mile before we hit a tunnel that required a headlamp to navigate. Then up the hill we went. For a mile. And then down the next hill—for a mile—and through some pretty serious mud. Here’s my video from the beginning of the race:


Bill and Tania finished their 14K. 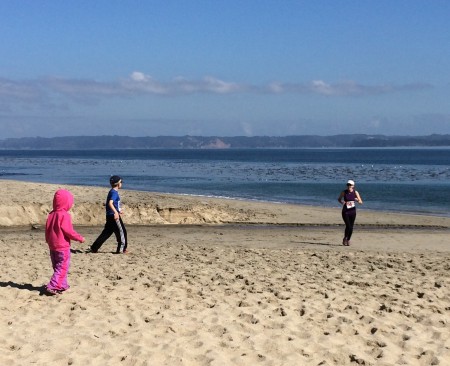 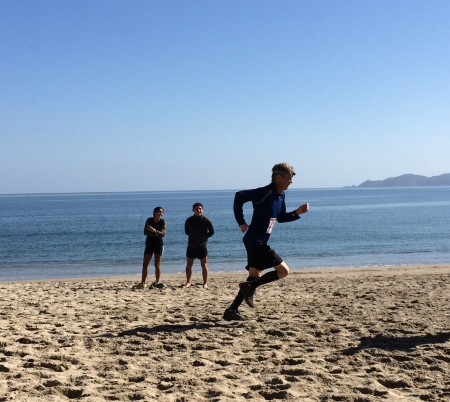 Bill, racing till the end

Right after the grown-ups completed their races, there was a kids’ race that Dominick had signed up for—a 2.5K. I volunteered to run with him because Tania had just crossed the finish line and had hardly had five minutes to recover. The children’s race was **supposed to** turn around at the tunnel, but no one told us that (well, to be fair, they may have mentioned it, but since I don’t speak Spanish…). Dominick and I picked our way through the dark tunnel along with about 5 other adults and ten children and then kept running on the other side, all the while looking for a volunteer or a sign about where we should turn around. It wasn’t until we all reached the giant hill that we realized there was no way we were still on the children’s course and turned back en masse to braille our way through the tunnel again. Meanwhile, back at the starting line, everyone started to get concerned about what happened to the children.

There was a group of young police-in-training at the race (they are called Carabineros, but I call them Habaneros) who naturally volunteered to trek back out on the trail and save the children. Tania watched them sail by in their matching green shorts and tank tops at about the same time I received a text… “Are you lost?”

By this time, Dominick was convinced that he was in first place because we were in front of the group of kids behind us. I assured him that we were definitely in first place in our wave.

I’m pretty sure we ran closer to 5K, but we embraced a sense of adventure, and I shared my motto with Dominick: Every wrong turn is just a good story waiting to be told. We spent the rest of the race talking about the adventure stories we could tell when we crossed the finish line. 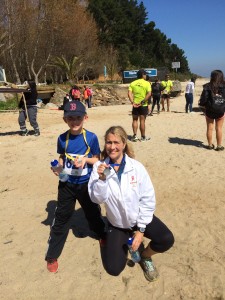 After the race, the Habaneros stopped in their bus to pick us up as we were on our way to catch the public bus back to Concepcion and gave us a ride all the way home. Saved the day again!! 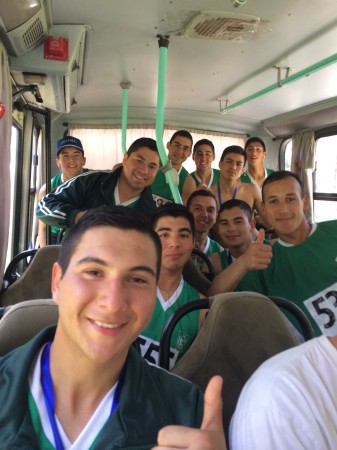 Once we got home and showered off the mud, Bill and I went up to the university to hang out at an event they were throwing in honor of Fiestas Patrias (Independence). 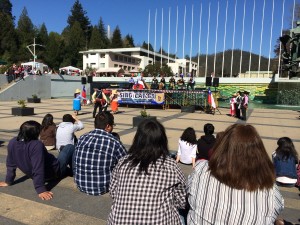 Quite a lot of fun. Now we are off to some more local adventures this week to take advantage of the holiday.