Oh, I know that running the Boston Marathon is on the bucket list for most marathoners. It’s like passing the GRE with high enough scores to get into whichever grad school you want to attend, or getting on the New York Times Best Sellers list so that publishers are begging to give you a huge advance for your next book. It’s Mecca, the once-in-a-lifetime pilgrimage every lover of running dreams about.

And to tell you the truth, I get it (even though I’d have to be about 75-years-old to qualify at my current pace). I’ve thought about trying to get onto a charity team one of these years and making the trek, once again, to Massachusetts—this time to register myself for the big event. But why? I mean, isn’t a marathon just 26.2 miles any way you slice it?

Well, for those competitive runners like my husband, I imagine Boston is about proving yourself a true and serious runner, but even for the back-o’-the-packers like me, Boston is an extraordinary experience. I’ve been out twice as Bill’s (proud) cheerleader. This year I screamed and clapped and Tweeted as the race progressed, throwing myself into the excitement with a vengence.  I spent at least five hours on my feet, standing between miles 16 and 17, watching as first the wheelchair participants came through, then the elite runners, and finally the regular people made their way through. 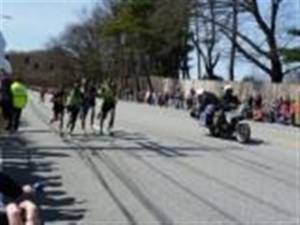 As I stood there, I sent out Tweets about what I was seeing and my pal, Brandon in Washington State, Tweeted me back with details I couldn’t get on my oldish cell phone about who was leading and when Bill hit the halfway point. 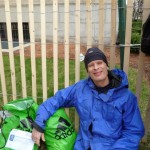 Bill after the race

When Bill finally came across the line at 3:47:43, Brandon sent me a text to tell me he’d crossed the line and I jumped for joy. The bummer in Boston is that you can’t really access the finish line, so I had to celebrate alone until (almost an hour after finishing) Bill made his way through the recovery area to the family meeting point. He looked a little ragged and worn out, as you might expect after any marathon. Apparently, he’d run a good first half, but had started a little faster than he meant to. After kissing three of the Welsely women and me, he felt nauseous (not because of the kisses, I trust) and had to stop to throw up. But he pulled through and finished with a qualifying time for next year!!! What a trouper.