The story of the Park City Marathon starts back in March of 2010, when Bill and I were visiting Punta Arenas, Chile. We were staying in a little hostel for a few days before we were invited to stay with a family we’d met through the Sister City Association. While we were still at the hostel, we met a couple from Park City, Utah–Todd and Jennifer. Chatting in the common area one afternoon, Todd and Jennifer told us that Todd had been instrumental in designing the Park City Marathon course. We made a mental note to get to Park City someday for the race.

A few days later, we were eating dinner at a restaurant with some of our Chilean friends. When the check came, we discovered we were short by what amounted to a couple of US dollars. Fortunately, Todd and Jennifer were dining at the same restaurant, and they loaned us the money to pay our bill. Since they left early the next day, we never had the chance to pay them back so, again, we told ourselves we needed to get to Park City to buy them a drink someday.

And here were are.

Today was the Park City Marathon. This is the first race I’ve ever tweeted while running. It was awesome to be connected to friends and readers while I was out on the course, especially because this was a tough race. The first 13 miles were actually fine. The course took us along some of Park City’s terrific and well planned trails, both paved and unpaved. When I hit the half way point at what is for me an average half marathon pace, I felt encouraged about the rest of the race, but the altitude and the heat started to really suck the energy out of me by mile 14.

I’d come into the race worried about the altitude, but I was expecting it to bother my lungs, maybe make me short of breath or cause burning in my chest. Instead I felt like there simply wasn’t enough oxygen in my muscles.  I took nearly an hour to get from mile 13 to mile 16.

Miles 17 to 26 were basically downhill, but by the time I had the chance to take advantage of gravity, the sun was up full force and hot (especially for people like us who have barely seen the low seventies in Bellingham all summer). I couldn’t get my miles down to my usual pace ever again after the half way point. Bill told me later he had the same experience.

Still, we traveled past some spectacular resorts and lodges, through upscale neighborhoods, and along well-maintained sprawling trails. Park City is spectacular!

One of my favorite things about this race: The Marathon Maniacs. I’ve been a Maniac since last year (#2294) but this is the first race for which I wore my Maniac jersey. At least ten maniacs approached me before or during the race. They shout out their numbers at you, you know. The Maniac number tells you when you joined. A number lower than mine means they joined the club before me; a number greater than mine means they joined after me. 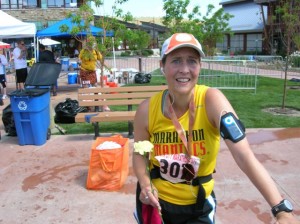 Once again, I felt the camaraderie of the running community today as other Maniacs shouted out encouragement to me on the course. I’ve never been, nor will I ever be, a natural athlete. The Maniacs have really fostered a mutual appreciation between runners of all skill levels and have made us into one team of marathoners conquering as many races as we can fit in in a year. So, to the guy from New York who is shooting for 25 marathons this year… to the local group who insisted I join them for a photo (wish I had a copy of it)… and to the Maniac who took the early start and passed me on mile 17 – thanks for your shout outs today.

After the race, Bill and I joined Todd and Jennifer for an outdoor concert (the March Forth Marching Band – soooo cool – even with a thunderstorm brewing all around us). If we’d arrived a few days later we would have missed them; they’re off to Europe in a couple of days. Predictibly, they wouldn’t let us repay them the money we borrowed in Chile, so we’ll just have to hope they get up to Bellingham so we can offer some hospitality sometime soon. 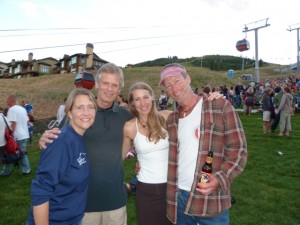 Bill and me with Jen and Todd