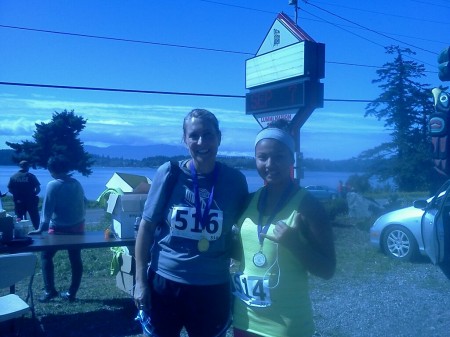 Clara and I were two of about nine half-marathon runners Saturday at the Journey for Healing Lummi Run/Walk against Domestic Violence. This little run is special and sort of a secret gem. I found out about it because Bill discovered it online by chance and ran it last year. He warned me that the course wasn’t marked well and that there weren’t many aid stations (there was one). But he also told me that it was a run with a lot of heart and good will and that it was a beautiful course. I should do it to get some miles in, he suggested.

This is the second race I’ve been to that starts on the Lummi Reservation. Both times, members of the tribe have been present to sing a prayer and give their blessing to the runners. Yesterday’s prayer was melodic and full of yearning. This little race was begun several years ago, one of the organizers told me, as a cleansing walk on behalf of those hurt by domestic violence. It organically became a run–and then a race with medals for finishers. Though this run is as low key as you can get, runners can expect appreciation from those whose homes you run past, barking dogs with wagging tails, and a roving support van. Runners can also expect the drummers and singers who start you off with a prayer to be stationed along the course to keep the beat of feet hitting the pavement. The musicians were my favorite part of the run–besides running with first-time half marathoner, Clara.

The first several miles follow the bay. I ran about an eighth of a mile behind Clara most of that first stretch. We hadn’t met yet, but I had a feeling we would be spending the better part of two and half hours together. Since there weren’t mile markers on the course, and since my Garmin was acting up and didn’t start measuring until I’d been running for about six minutes, I’m not sure exactly where we were when I passed Clara (maybe around mile five). All I know is that when I came to a fork in the road where I clearly needed to make a decision, she was an eighth of a mile behind me. I stopped, turned, and shouted to her, asking if she knew which way we should go. With absolute confidence she steered me to the left and followed shortly (I’m glad she’d looked carefully at the course map!).

In a few more miles Clara caught up to me and we chatted our way up a long, gradual hill as a Lummi police officer tracked with us, checking that we were feeling alright and handing us water. Clara had a blister and fell behind me with approximately four miles to go. Still, she finished only a few minutes after I did. She told me it had been her first half!

I just want to shout out to Clara and to the organizers. Thanks for a lovely day. Thank you for the beautiful sweatshirt, a warm welcome, and for the yummy sliced up fruit ready for us at the finish line! I know this event is a labor of love, and I promise that as I ran the circle of the course, I held your original intent in my heart: that everyone would be safe from harm in their own homes. Blessings.