Just when you think you’ve got things figured out, the marathon will, once again, humble you. Last Saturday I ran the Lost Dutchman Marathon in the Superstition Mountains near Apache Junction, Arizona. The night before the race, I scrutinized the elevation map carefully and gave Bill my predictions regarding what I thought my pace would be for each section of the race. Sitting on the bed at the Super 8, I was feeling confident that this race would be one of my best. I even predicted it was possible to achieve my second ever sub 5-hour finish. 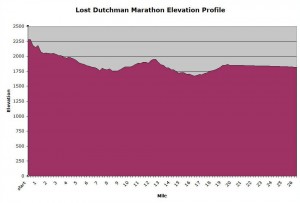 Here was my thinking: The first nine miles would be a net downhill run. This I could do averaging 10:30 (minutes) per mile. From mile 9 to 13, I would slow down to a 12 minute mile. Miles 13 to 17 would pick up speed again because they were downhill, but I’d be tired, so I could expect to average 11:30. After mile 17 my speed would be between 12 and 12:30 because my legs would be fatigued and the sun might be hot. My average would be close to 11:30 and this would get me in at or around 5 hours, depending on how warm the day was and how good I felt toward the end of the race.

And so, with the conclusion that tomorrow would be fabulous, possibly even record breaking, I settled in for a restful night of sleep.

Only I didn’t sleep. I tossed and turned and sort of drifted off, but not really. At 4:00 when I got out of bed to make coffee, I was excited, but not exactly energized. Still, I didn’t feel rotten and expected a decent race. 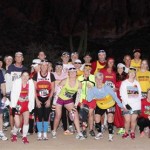 The Lost Dutchman Marathon is exactly my kind of event. I loved the bus ride to the starting line with other eager runners. I loved finding fellow Marathon Maniacs and posing for pictures together. I loved the little mesquite campfires scattered all around the field where we warmed ourselves in clusters of eight or ten as we waited for gun time to draw near enough to move to the starting line. And when the gun went off, I loved finding my place at the back of the pack with people like the guy from New York City who brought his camera along to take pictures of the cacti and the cattle sprinkled beside the road in the first several miles down the mountain.

The first six miles were just as I expected: slightly rolling, but mainly downhill. I slowed to 11 minutes for miles 7 to 9. By the half way point, I was under two and half hours–good enough. I didn’t feel great, though. Somewhere before the halfway mark, I can’t say exactly where, the terrain changed from dirt roads to concrete, and I got a stomach ache (not sure the two are related, but they seemed like it at the time). Usually, I wear a running belt so I can carry my cell phone, energy gel, extra Tylenol, and water, but because of the copious number of aid stations on this course, after some debate I decide to forego the burden of carrying my own supplies. I regretted this decision by mile 13. Thirsty and wishing I could call Bill to tell him to meet me on the course with some pain relievers to shore me up for the final miles of the race, I berated myself for ignoring my own better judgement.

At mile 16, I paused at the aid station to bend down and adjust the tongue of my left shoe, which was digging into my ankle. When I stood back up, I felt my whole body tighten–from my neck to my toes. After that, I was lucky to beat a 15 minute mile for the rest of the race. The long, hard, rolling, tedious miles stretched on and on as I winced and fought back tears.

If you’ve followed my blog, you know that I alternate between being a cheerful, philosophical, spiritual runner and a blubbering, snot-nosed crybaby. Saturday I was the latter. Right around the 23.5 mile point, Bill showed up on the side of the road (to walk beside me as I continued to run at a glacial pace), and I burst into tears. He told me later that he hadn’t seen me look so miserable since South Africa when I was plagued with fever and diarrhea. He even asked me if I was going to make it to the finish line. 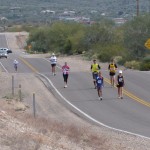 Only the week before I’d posted an entry on my Psychology Today blog about knowing the difference between injury pain and “normal” pain. Somehow, I knew that as much as I was hurting, I wasn’t doing any permanent damage. What was going on had to do with starting too fast, sleeping badly, being warmer than I’m used to, and maybe even inadequate training this time around–but it wasn’t going to put me in the hospital. And though it might take me a half hour to finish the last two miles–and I might cry the whole way–I knew I could do it.

I did cry most of the last two miles–up until I had only a half mile to go. At that point, an older runner (a Maniac) came up behind me and, hearing my grunting and sniffing, said very authoritatively, “Come on, babe. If I can do this you can do it.” I turned to see who was addressing me with such conviction. I guessed he was about 60 years old. Hunched over and breathing heavily, he had his right arm pushed up under his Maniac jersey, apparently holding his ribcage in place.

“You okay?” I asked, wiping my tears away, grateful to have something besides my own pathetic body (and attitude) to focus on.

“Nope,” he said. “Fell down twice in the last couple of weeks and fractured my shoulder in two places… and cracked my rib.”

My god! One thing was for sure: He was right! If he could finish the last half mile of this endless race, I could certainly do the same. “Did your doctor give you the go-ahead to run?” I asked, incredulous that any physician would give a stamp of approval for someone to do a marathon in that condition.

We never said another word to each other for the remaining minutes of the race, even as we finally turned the corner and saw the finish line come into view. We just ran and grunted till we passed the mat. Chuck was his name (Chuck, if you find this: Thank you for the encouragement!).

I cried for another half hour after finishing. I think expectations, even more than pain, were the culprit of my sorrow. This week, I’m pondering how to find that precarious balance between setting goals and letting life unfold as it presents itself. If I hadn’t set myself up expecting a PR, I honestly don’t think I would have felt so bitterly despairing in the last ten miles of this race. But it’s certainly absurd not to try to set reasonable expectations for improvement. Once again, the marathon gives me the gift of wisdom. Somehow, one must simultaneously have goals and the ability to accept failure to achieve those goals.