We were out the door by 5:50 am and were soon at the starting line with 40 other marathoners ready to spend the day in one of Wyoming’s wild horse preserves. I’ll get to the wild horses in a moment, but first, the race.

I was excited to find a group of Marathon Maniacs and 50 Staters hanging around the start of Green River, Wyoming’s Run With the Horses Marathon. 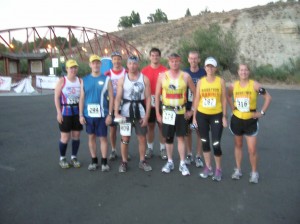 This was a small race, which is our favorite kind, and it lived up to our expectations. The race organizers are locals who love their community and who take pride in their event. As a race director myself, I know what it takes to give runners a good experience and keep them safe at the same time. These folks know how to do it.

The run began at “Expedition Island,” a piece of land which divides the Green River and is host to a community center and a well-kept park. With a one-two-three-go, we got started at 6:30 and quickly left the town proper for 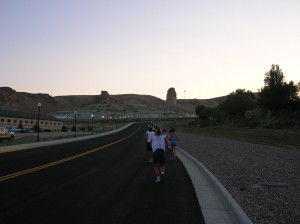 the the  Pilot Butte Wild Horse Scenic Loop, which climbs for five (5) miles and then rolls up and down, climbing some more, until at 13.1 miles, we turned around and headed back to our starting point.

Since it’s my goal to complete a marathon in every US State, I needed to check Wyoming off my list, but I can’t imagine a better race. Low key and intimate, this race gave me some terrific thrills along the way. By mile 7-ish, I met my first little herd of wild horses. If you know me, you know one thing I love as much as running (and as much as writing, for that matter) is ANIMALS. I love dogs and cats and lizards and whales and zebras and bison and horses. I’m not a horse owner and I’m not knowledgeable about them. But I’m intrigued by the idea that there are these wild, majestic creatures roaming about in the West.

There are, apparently, 6000 wild horses in Wyoming. “Wild horses have no true natural predators other than an occasional mountain lion, ” the High Desert Survival Guide says. “So populations can increase rapidly. This rate of increase is generally about 20% per year… When populations of wildlife, wild horses, and domestic livestock exceed the capabilities of their habitat, the environment begins to suffer. If prolonged, it leads to poor rangeland and an overall decline in the health of the wild horses…. the existence of the herds [near Green River] is a credit to the private landowners of this area who do not fence their land, thus allowing the horses to wander as necessary for food, water, and shelter…”

I was lucky enough to see some horses during my race. 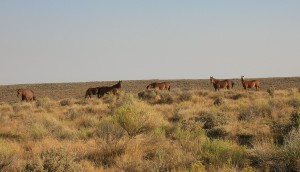 Because we arrived early and on foot in their habitat for the race, they hadn’t been scared away by cars and motorcycles yet.

The rest of the course was gorgeous, well supported, and challenging (due to uneven ground and the elevation–7800 feet at the course’s highest point). 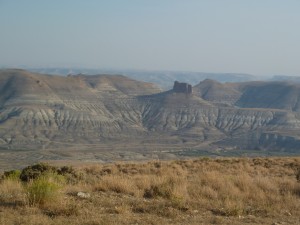 After the run, Bill and I enjoyed the Green River Chamber of Commerce Festival, which was held in the park where the race started and ended. Bill won first place in his age group with a time of 4:25 and, believe it or not, I won second place in my age group with a time of 5:51! Just goes to show that if you sign up for small races, you have a chance of being among the best, even as you bring up the back of the pack. 🙂 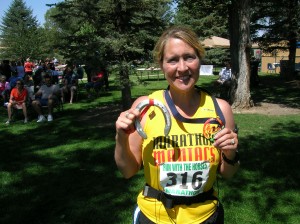 I have to say that this little town and this little race won over our hearts. After we’d floated down the river to cool down and gone back to our Super 8 to have a shower, we re-joined the festival and listened to a terrific band called the Blind Dog Smokin‘ blues and jazz band. Listenin’ to bands is prime people watchin’ time, and we enjoyed checkin’ out mama’s moves in the row in front of us while we sipped on some Red Hoptober Beer from the New Belgium brewing company.

After the festival closed up, Bill and I drove the course to see if we could find any more horses. We did. 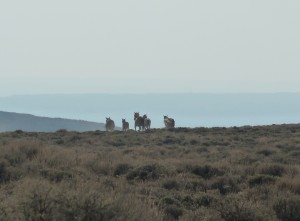 Seize the day, my friends. There’s a big old world out there waiting to be discovered, and every little crevice is worth getting to know. If you’re a runner, I highly recommend the Run With the Horses Marathon. If you’re not a runner, why not find a great band to listen to and watch mama get her boogie on?