At 7am this morning, we crossed the starting line of the Estes Park Marathon in Estes Park, CO. Since we’d driven the course yesterday, we knew that the first six miles of the race would take us from 7600 to 8100 feet above sea level. For me, these first six miles were slow, but easy. My energy was good and although I was breathing more heavily than usual, I didn’t feel fatigued.

In only a few more miles, however, the wind picked up and continued for the remainder of the race.

I wouldn’t have thought it possible, but a steady wind blowing about 20 miles an hour, interrupted occasionally by gusts of 35-ish mph, blew straight in our faces for HOURS!

At mile 13, I’d already been running for 2 hours and 50 minutes (my slowest first half of a race ever)! I knew right then that I’d be lucky to beat six hours. I felt my energy waning as I pressed through the wind over the hills in the hot sun at altitude. I had to make an attitudinal decision: Would I let myself become upset that this was going to be my slowest marathon, or would I make the best of the situation? As you’ll see below, there are worse places to spend six hours! I decided to buck up and push forward with a smile. 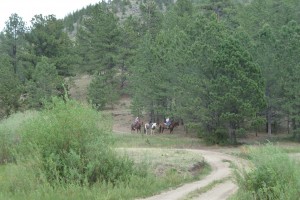 Bill tells me that the riders cheered for him when he came through this point (above). It was at right around mile 16 that I met a woman from Florida who told me she wasn’t impressed with the beauty of Estes Park or the Rocky Mountains. I left her in the dust. What is she? Crazy? This was one of the most beautiful courses I’ve ever run, maybe second only to the Rio de Janeiro Marathon. 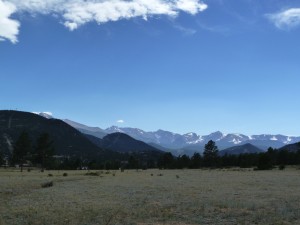 Everywhere you look, the mountains! 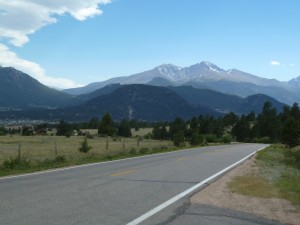 Shortly after this point (above) another runner offered me a drink of the beer his friend had delivered to him. At the finish line I thanked him and he said to his wife who was standing nearby, “She had a beer.” I corrected him with, “He gave me a sip of his beer.” An exchange of looks between husband and wife ensued. Wonder what that story is! 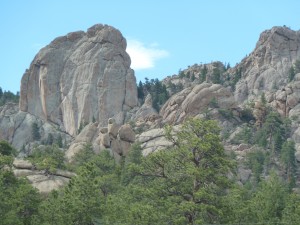 Like I said, there are worse places to spend 6 hours! After this view I began to feel some nausea. I wasn’t the only one. At mile 25 I came upon a barfing runner and alerted the folks at the aid station that he needed assistance. Nothing like watching someone else throw up to soothe an already upset stomach (not!). 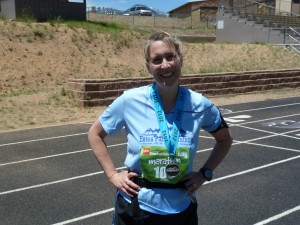 Bill was waiting for me at the finish line, as always. I finished in 6:09. Bill wishes that regarding his race I only say that I was right: The elevation, wind, heat, and hills insisted he take my advice and slow down.

**Note to anyone thinking of running the Estes Park Marathon: This is a well organized, well supported race! You won’t PR, but you’ll love it.