Well, it’s only fair that I report on the failures as well as the victories. The truth is, there have been a handful of races I’ve finished for no other reason than that I would be blogging about them later. Knowing an audience, however small, is holding me accountable has given me strength and courage over the years. In the case of the Baker Lake 50K yesterday, not even the fact that I’d have to fess up here could keep me going beyond the halfway point.

The morning started for me at 4am. I awoke feeling good and ready to hit the road by 5:00. I met Cara and Molly in the parking lot at Haggens; Cara was driving. These two lovely ladies had agreed to head down to the the race an hour early so I could take the early start (since I expected to be on the trail for 8 hours). On the way to Baker Lake, I ate my peanut butter and jelly sam, took my Tylenol and got my supplies organized. By the time we reached our destination, I felt ready to go–and psyched about the run.

At 7am, a group of about 30 early starters took to the trail. Molly and Cara cheered me on. Over the dam and into the woods we went. As usual, most everyone passed me, and I found myself near the back of the pack (even among the early starters, who are thought to be the slower runners, though I have my doubts about this particular group). The morning was GLORIOUS! Sunshine trickled through the branches of the trees and glimmered on the lake. The mountain loomed large, supervising us with obvious approval. Even at my slow pace, I felt like the elements were giving me strength. The trail itself was soft, dry, and clear of fallen leaves or other debris that could make it difficult to figure out where to put my feet. I felt happy–grateful for the good weather and enjoying the smell of early Fall in the air. 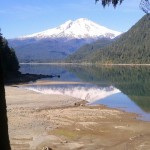 My pace settled in comfortably, and I had a good first ten miles. When my Garmin registered “10” my time was 2:20, which means I was averaging 14 minutes a mile–respectable for me on a trail run. Soon enough, however, the first of the 8am starters began to pass me, and the trail being extremely narrow, I was compelled to step off of it to let those pesky competitive folks go by. I never begrudged them as I did this, but the stopping and starting I was doing as I stepped into the brush to let them by ruined my rhythm (and tightened my leg muscles). By mile 14 I was fatigued.

Still, I had it in me to keep going… until I fell. The first of the 8am starters had already reached the halfway point, taken their aid, and turned around. Now I was getting out of the way for people passing me from behind and coming at me from in front. As I calculated it, if I was the slowest person on the trail, I was going to be passed by EVERY person of both the early start and the regular start at some point. And then it happened.

I was running down a fairly steep hill, hopping over rocks and roots with less nimbleness than I had a couple of hours earlier, when a fast fellow came up toward me with determination in his eyes. I knew I’d better get out of the way and as I stepped aside to give him the right-of-way, I hit my toe on one of the aforementioned roots and flew down the hill face first. Thanks to my fleshier parts, I landed softly. I lay there for a moment as the poor guy who’d been racing for his life moments ago stopped to see if I was okay. I made a quick assessment of my joints and bones and pronounced, “I’m fine.”

“Are you sure?” he asked, glancing up the trail, where he’d been headed before I’d interrupted him with my clumsiness.

“Yes. I feel quite sure. Go ahead. Nothing hurts.”

“I’m sorry for the contact,” he said. I didn’t correct him, although I knew he hadn’t made any contact with me. I’d fallen all on my own.

I got up and brushed myself off, a little weepy and worse for the shock of it, but truly not in any pain, and I kept running. I do expect to fall when trail running; it happens almost every time I go out with Bill into the mountains, but this time, I saw that this fall could be the first of many as I tried to dodge those runners more adept at the whole business than I.

Truth be told, I lost my steam. From mile 14 to 15, I gave myself a good think. I had run the whole trail from end to end, had a wonderful time, enjoyed the morning, completed a long, hard training run, and couldn’t think of a really compelling reason to complete the second half of the race. The journey to the halfway point had given me what I needed. To do the rest out of sheer determination might ruin the journey for the sake of the “destination.”

You don’t have to finish everything you start, you know. I strive to be a finisher of the things I begin, and I have a pretty good track record, but I realized yesterday that I’d be happier stopping at the turn around than completing the race. I may try it again another year, or I might just go out next summer with a friend and run back the opposite direction at a pokey pace–with a stop along the way for lunch. Anyone wanna come along? 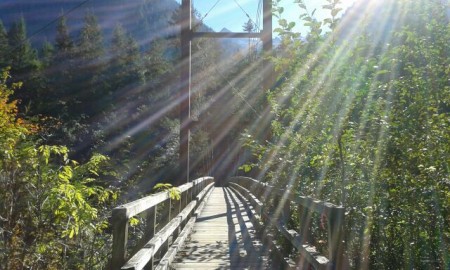