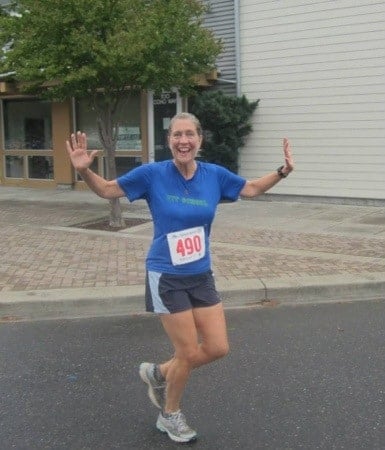 Notice the picture of me smiling like I’m having fun? This photo was taken by my awesome running coach Carol Frazey during Saturday’s Waterfront 15K in Belllingham–right around the halfway point, I think.

For months, I’ve been faithfully putting in my training as prescribed by Carol, making sure to get in at least the three critical workouts she recommends each week: one day of speed work, one day of pace work, and one long run on the weekends. And while I’ve managed to get PRs in both the 10K and half marathon distances this year, I’ve felt they were hard won and didn’t necessarily represent good race strategies. For my 10K PR, the last mile was a lovely, accommodating downhill (which I appreciated, but I do have to give gravity at least a little credit). For my half marathon PR (which was my best time by a handful of seconds, really), I’d gotten tired and slowed to an eleven minute pace for the final two miles–which means I’d run the first few miles too fast. (Let me quickly assure you that I’m not being hard on myself by noticing these things; I’m just looking at the big picture of becoming a more proficient and efficient runner. You won’t find me slipping into perfectionism, I promise!! I was content with both of those races.)

What I’ve been trying to do is what everyone says is optimal in a race: that I start at a reasonable and sustainable pace and hold it there so there’s something left in the tank at the end. I’m very excited to report that I achieved this in Saturday’s race.

I think because the course was super crowded at the beginning, I wasn’t able to start very quickly at all. On the narrow path available next to the traffic buzzing through Fairhaven, there simply wasn’t space to pass anyone, so I was lucky to have snuggled myself in the starting area among other runners who were also going for a 10 minute per mile pace. They kept me from using precious fresh energy too soon.

I knew the first half of the course would allow me to hold my 10 minute pace because there were no uphills to contend with, but mile seven and mile nine on the way back both had hills. I set my heart on holding 10 minute miles until I hit the hills on mile seven and then doing mile eight at 10 minutes or faster, if I could. And I could!! My final overall pace average was 10:03 and my finishing time was 1:34. That’s 10 minutes faster than the last time I ran the Waterfront 15K in 2011!!!

Friends, I’m here t tell you that if you keep up your training and don’t give in to discouragement, it will pay off. Although I’m an avid runner, I’m not a naturally athletic person. I’m also 46 years old, 135 pounds, and a lover of cheese and wine. My body is not built for Boston Qualifying, nor do I have the work ethic to push myself to the brink of common sense to get myself there. What I do have is what anyone can have: tenacity–in good-enough measures.

If you’ve been following me on this journey and working toward your own goals, I hope you’ll notice the small improvements you’re making and celebrate them. Sometimes movement is measured in time, sometimes in attitude. For me, more important even than the PR or the consistent strategy I employed during Saturday’s race was the fact that I had a good time. This is the first time I’ve come close to my time goal AND felt happy for the whole race. You might remember me saying at the beginning of this year that I was going to give one year to getting faster, but that if it made me unhappy to run harder, I’d go back to lallygagging my way through races. Looks like one can work hard and be happy at the same time. Who knew?