It’s Saturday, August 27. We’ve been in Yosemite for several days–unplugged and totally disconnected from all that keeps us on schedule or organizes life. I camped with Bill, as promised, until I could camp no more without feeling anxious and crabby. In spite of the fact that we sandwiched Yosemite between two marathons, we managed to put in about 20 miles of walking and hiking throughout the week. Highlights for me include a hike up to Lembert Dome, a dip in Tenaya Lake and the Giant Sequoia grove. Just before we left the park an RV exploded near one of the gates and knocked the power out in the whole park.

On camping: I know so many friends who love the smell of campfires, the feeling of sleeping in the open air, and the sound of the wind rustling just outside their tents. As for me, I do not like having to bundle up and put on shoes to pee in the middle of the night and I cannot sleep wondering if a bear will smell the insect repellent on my skin and scratch its way into my tent. I apologize to all outdoor adventurers everywhere. I love nature, but I I think there is a reason why humans build shelters to protect themselves from certain aspects of it. I was most delighted to check into a Motel 6 last night with an en suite toilet. Still, in a couple of days, I’ll be back in the tent with my beloved (with a smile and my best “good sport” attitude). 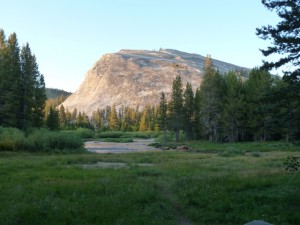 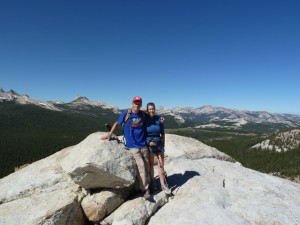 Bill and Cami at the top of Lembert 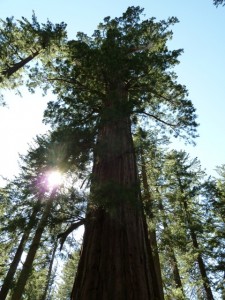 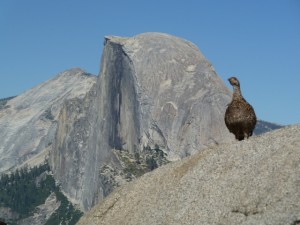 A Grouse with Half Dome

We arrived in Santa Rosa, California today and picked up our bib numbers and swag bags for the Santa Rosa Marathon. For the second time (the first time was in Boston), Bill and I got the chance to talk to Marshall Ulrich, author of Running on Empty. Bill finished his book within a couple of days of buying it. I read part of it and then got waylaid by my own writing projects and other reading that seemed pressing.  This time, we met Marshall’s wife, Heather, too. They are both lovely, warm people. Look for a review of his book in the next couple of weeks. I’m often asked what running books I’m reading… so now you know. And I’d love it if others would read along with me and share in the discussion.

Tomorrow, I may Tweet while I’m running: http://twitter.com/#!/camiostman. It mostly depends on if my phone still has a charge in the morning. The race begins at 7am, PST. After the race, we’ll have the chance to come back to our hotel, shower and then get on the road again to head north for a little wine tasting. More later.