I recently again saw the images of officials trying to stop Katherine Switzer from running the Boston marathon. 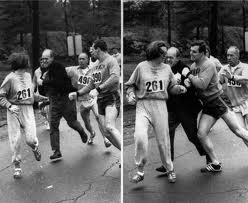 Remember how people used to think that women shouldn’t run long distance? It was commonly thought that if a woman ran, her uterus would fall out! We women had to fight for the right to run, had to prove that our bodies could handle it and that the world wouldn’t fall apart if we joined the race. Once these things were proven, the culture of running changed and women runners were no longer invisible.

Now women make up more than half of all marathon entrants! A woman (Mary Wittenberg) is even the race director of one of the biggest marathons in the world—New York.

This week, we’ve seen evidence of a shift in the culture of our country. The supreme court ruled that every marriage (where a state has sanctioned it) will be recognized by the federal government and afforded federal benefits. This is for the country what Switzer’s run was for women racers in that we have the chance to see that certain myths are unfounded, that they are based on misinformation and fear.

I rarely comment on political issues on my blog, but I feel like it’s important to acknowledge the DOMA ruling. A wrong against a specific woman—Edith Windsor, who brought the challenge—was righted in this decision. And many more people have had the burden of invisibility lifted and their relationships have been afforded dignity.

To my friends who are directly impacted by the decisions made this week: I’m celebrating with you.

My training this week:

I’m still working toward the Seattle See Jane Run half marathon on July 14, so I’m trying to get my 10 minute pace to feel consistent.

Monday: Speed work. 4 miles with 25 minutes of “ins and outs”—hard on the straight part of the track, recovery on the curves.

Friday: 10 miles with 8 miles of pace work. I did four 2-mile repeats aiming for 9:50 per mile. For the first four miles I was right on. The third repeat was slightly slower, and the fourth one slowed to an average of 10:15. The workout didn’t bode well for me reaching my pace goal in the upcoming race, BUT it’s still stronger running than I’ve ever done before, so I’m not discouraged. The fact is that if I even beat 2:15 in the See Jane Run half, I will have my PR.

Hope your week in running was good, friends. I’d love to hear about both your training and your reactions to the rulings this week. Hugs to all.