A Run in the Slush 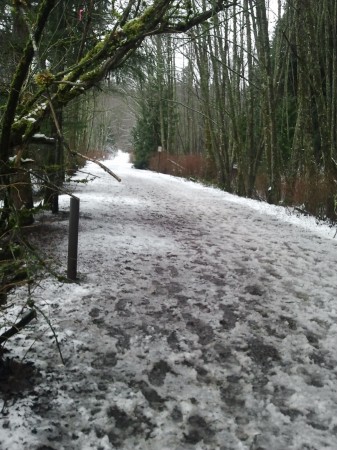 When my friend, Sharon, told me she wanted to train for the Tinker Bell Half Marathon, I was quick to say I’d join her. I’m a huge fan of Disneyland, and a big fan of Sharon too. Sharon was one of the six or seven friends who held my hand and gently guided me through my divorce a decade ago. She was the one who gave me a place to sleep on her floor when I was so discombobulated I didn’t know which end was up.

Since those dark days, Sharon and I have been through a lot together. We’ve traveled, taught classes, cried over losses, raised puppies, and aged (gracefully) together. But up until a few months ago, we’ve never run together. Sharon wasn’t much of a runner until recently, and I thought I could be supportive of her new venture not only by going to Disneyland with her (a huge sacrifice on my part, as you can imagine), but also by organizing a fun final training run around Lake Padden here in Bellingham and providing a pizza lunch afterwards–maybe with a little pre-race toast to her success.

The original plan was for all of the women who were going on the trip (six in all) to meet at the lake this past Saturday and do four loops and then another mile out and back. Each loop around is 2.6 miles, so my plan would have gotten us up to 12.4 miles, a respectable distance for a first timer’s final half marathon training run.

But, alas, as will happen, my plans were foiled on several levels. First, three of the women going to Los Angeles with us next week couldn’t make it on Saturday. One had to work and the other two had a wedding to get ready for. Then, it snowed–and not the nice, pretty, fluffy stuff either. The trail around the lake was slushy and muddy up to the ankles–and really gross and cold. Sharon’s sister wisely bid us goodbye after one loop around the lake, but Sharon and I decided to press forward. Every step was an effort, especially on the flat side of the lake which is most exposed to the elements. On our third time around, Sharon and I agreed that we would skip the slush and repeat the hilly but forested part of the trail and then call it quits. In the end, we eked out 9 painfully wet, freezing miles (which from my perspective are worth at least 12 flat and sunny miles).

Home we went to shower and have our reward: pizza. Oh, but did I mention that Sharon has discovered she shouldn’t be eating gluten or dairy? So we opted for sandwiches with gluten free bread and fake cheese, and we toasted with hot coffee.

Once again, I learn the perennial lesson that running has to teach: This won’t go the way you planned it, but you can make the best of it if you put your mind to it!

BTW, it’s a good thing we’re on our taper because the snow came down heavily by Sunday evening and I’ve been in the house for a few days now. 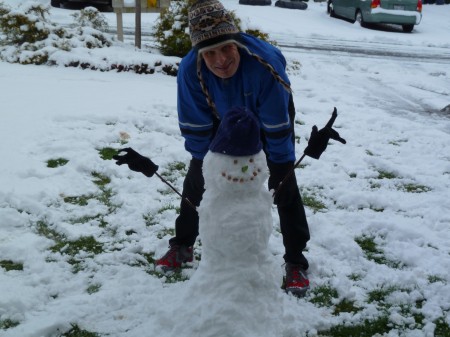 Bill built a snow person in our front yard 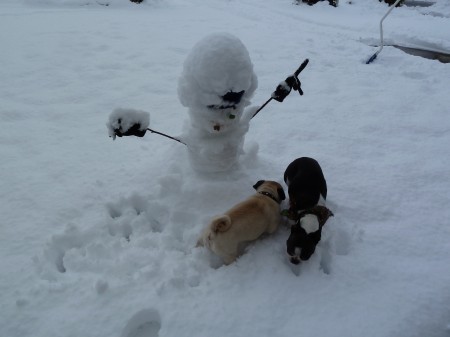