Little Trailer on a Mountain 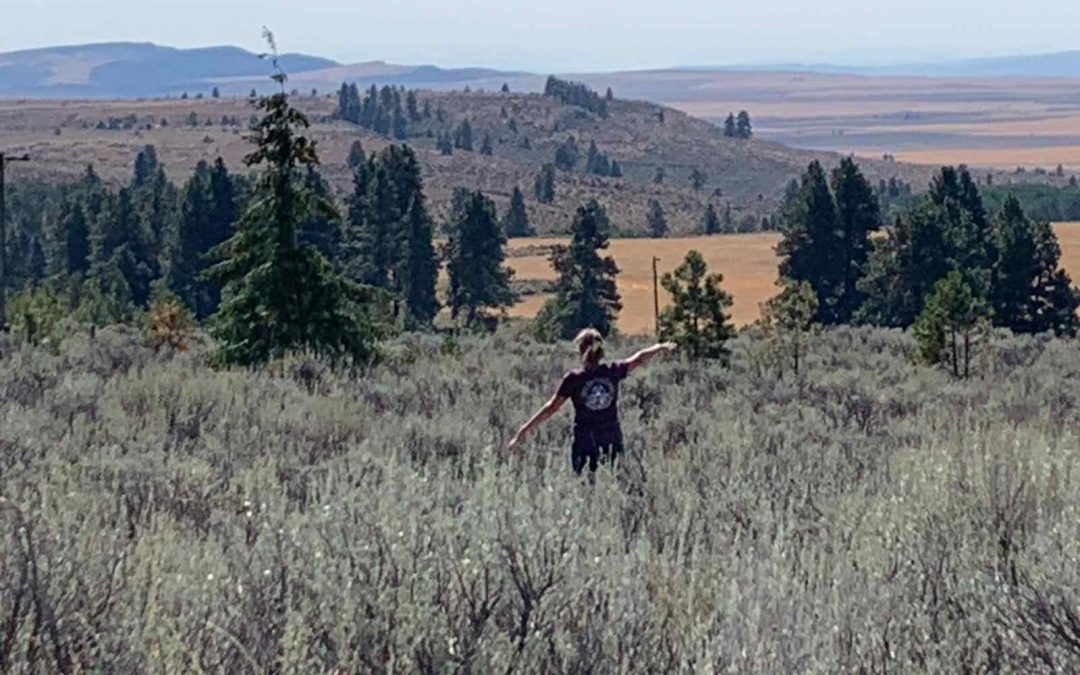 You might also know that I’ve been growing my awesome business, The Narrative Project, and that it’s FIVE years old as of this month. When the pandemic hit, I had to pivot some systems, including launching the 2021 cohort entirely online. That pivot has been interesting and exciting, but also stretched my business know-how and ingenuity—bigly.

What you may NOT know is that ALSO, during the pandemic months, I started another project that has my heart going pitter patter…

I bought some land, and I’m building a sanctuary.

My grandparents owned a beautiful piece of land that they deeply loved in East Wenatchee. If I remember correctly, my grandmother found it in The Little Nickle, an old free newspaper you used to be able to get at convenience stores—craigslist before craigslist. From the minute I saw their 20 acres, back when I was in my thirties, I coveted it. I felt its magic just as they did and often daydreamed about it. I even offered to buy it from them when they were in their eighties and clearly not mobile enough anymore to enjoy it, but they told me no at the time. Gram said she just couldn’t part with it, even though I promised to keep it just as it was (which is to say, it was JUST a piece of land with a fence around it—no well, no electricity, no septic) as long as she was alive.

After they died within months of one another, the property was put in my aunt’s name. But I still wanted it. So this year, my aunt and I came to an agreement. I bought it and started driving out to sit and stare at once a month.

The property has an beat-up, old trailer on it that at first I thought I would haul away and put in a landfill, but when I started to talk about the property and the trailer to friends and to drag a few people out there with me, including my dad, who ultimately figured out how to get INTO the tightly locked up trailer, I started to notice something. Everyone—and I mean everyone—was as taken with the property as I have always been, and MOST everyone wondered if I was going to RESTORE the old vintage trailer.

Restore the trailer? I thought. It had never occurred to me. What I thought I would do was put a yurt on the property and create a place where friends and I could go glamping, write until our laptops ran out of battery, and sleep with a peek out of the rooftop window at the starts.

But after about the fourth suggestion that I could restore the trailer, I started watching Youtube videos of people who had restored or were restoring or rebuilding RVs and trailers and, it turns out, this is something people do!

The thing is, the trailer IS pretty cool. It’s got vintage appliances (which may or may not work), and beautiful old wood paneling.

But it also has a rotting floor, a boarded up back door, rodent poop all over the place, holes in the countertops, and a rotted frame on at least one of the front corners. Other than that, it seems water-tight, but I wouldn’t know until I got it apart. And the deck that goes all around the little structure is ROTTEN and crumbling. My grandfather built that deck and I love it, but it has to go!

The OTHER thing is, I’m a little bit useless when it comes to building. I mean, those of you who know me intimately enough to have been in my house know this about me: While I’m a rockstar at putting together Ikea furniture, and while I can problem solve ALMOST any interpersonal issue you bring to me, I can barely change a lightbulb. This isn’t hyperbole. I have three lightbulbs in my house right now that I can’t find the right replacements for and have repeatedly bought and had to discard the wrong ones.

But the more I sat with the idea of fixing up the trailer, the more I found I wanted it. Wanted to be able to hang out where my grandparents spent their time, wanted to see if I could fix what was broken, wanted to make vibrant what had become dull.

So I called my dad, who knows how to do everything related to building. Here’s how the conversation went.

“I’m totally pissed off at you right now, Dad.”

“You taught the boys the trade and taught me nothing. Now I’m useless. Now I have a project I want to do and not the first idea of how to do any of it.”

A moment of silence. “Well all you ever cared about was school.”

Getting annoyed that he’s pawning off the responsibility of my uselessness onto me (where it might ultimately belong—I get it): “That’s not the whole story. I liked school, but you never invited me to the worksite.”

Mollified: “Okay, then. Your punishment is that you have to help me restore the trailer. You have to teach me how to do it.”

Silence. And then: “That sounds fair.”

So last week, Dad took me shopping for tools. Yep, I just bought my first power tools. I haven’t even opened the box yet, but I have them.

And I’ve got such vision for this trailer and this land.

I can’t wait to share it with you. The vision. The story of us fixing up the trailer. The process of turning this beautiful 20 acres into an off-the grid sanctuary. And ultimately, the sanctuary itself.

Come along on the journey. Suggestions, ideas, questions, and your stories of similar projects are VERY welcome!!