Bill received an email on Thursday announcing that his Friday classes would be cancelled, as would all afternoon classes at Universidad de Concepcion, because the student union had decided to have its big annual “ramada” party to celebrate Chile’s independence day. Faculty members told us that university officials were concerned about safety and wanted all staff out of their buildings and off the campus by 12:30. Naturally, Bill and I wanted to see what kind of party could close down a big campus like U de C and require all adults to get out of Dodge, so we decided to walk up to campus and have a look around.

Since my Spanish instructor had told me that activities would commence at about 2pm and go on until around 9 or 10 in the evening, we thought that 3:00 would be a good time to wander through the party (after things got started but before complete debauchery ensued).

By the time we got up to the campus, students were still pouring in in droves. Apparently, though U de C hosts the event, people come from all of the other campuses in town. They set up tents to sell beer and a drink they call “teremoto” or “earthquake.” Bill bought a light beer from one of the stalls to start with… you know, to support the students… 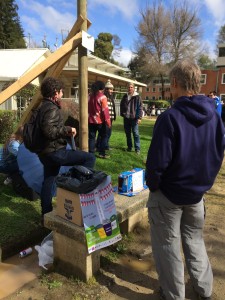 but we got curious about what the teremoto was and felt we simply had to try one—as a cultural experience.  The recipe calls for sweet white wine, Pisco (Chile’s special liquor), pineapple ice-cream, and sugar. Then it is served in a one liter glass. 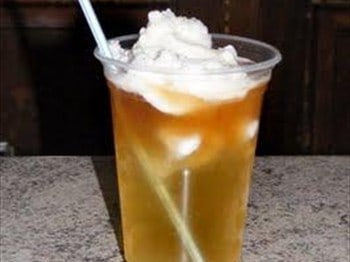 I tried to help with it, but it was SOOO, SOOO sweet, and I’m afraid Bill had to manage most of it on his own.

Students simply piled onto the campus until every inch of this area was filled.

And as you can hear in the video, they had a good quality sound system set up so that we could hear the music quite easily from inside of our house a few blocks away.

Before heading home to listen to the party from a distance, Bill and I went out to get pizza at The Deli House, one of my favorite restaurants close to the campus (because they have decent coffee and English on the menu). When the waiter brought the bill, Bill said, “I assume you have money to pay for this?” I felt my face flush red with panic, because… well… no, I didn’t have any cash. Bill ALWAYS has cash. ALWAYS.

Bill always has cash except when he’s been warned about pickpockets being plentiful at an event we weren’t really advised to go to in the first place. He’d left his wallet at home so it could’t get ripped off while we were walking amidst the crowds and sipping on a teremoto among the ramada tents. And he had spent what he had brought along on the teremoto.

He quickly explained to the restaurant staff that he was leaving me as collateral while he ran home (10 minutes away) to get some money. Geez! Good thing we both had a sense of humor about it, which is more than I can say about our waiter—who was punching out and clearly wanted to collect his tip and get to the par-tay. But anyway, Bill was back in about 20 minutes and we avoided having to pull a shameful “perro muerto” (literally: dead dog, or to stiff someone on what you owe them) only to slink back the next day to pay and explain what happened.

We went to a beer tasting festival. I’m always astounded that my husband, who sometimes confuses the escape button on the keyboard with the power button, thus turning off his computer in the middle of whatever he’s doing, can find ANY event on the internet that involves running or beer. Today it was beer. 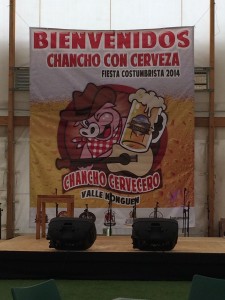 While I’m not typically a huge fan of beer (I know… I can hear the boos), I always go with Bill to beer festivals because I can’t stand the idea that fun is being had without me. So I tagged along. And I’m so glad I did. I found a good stout (which I do like) and sat and sipped while Bill circulated and tasted everything there was to taste. He ended up buying a beer from the same fellow who sold me my stout, and then we settled in to watch the band and the dancing. Chile’s national dance is La Cueca. Check it out.

There was also bull-riding for the children and plenty of Antichocos (Chilean shish kabobs) for sale. We stayed for about three hours and left smelling of BBQ. 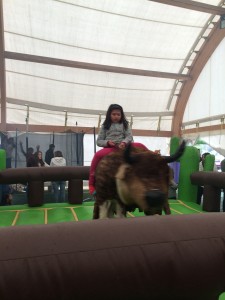 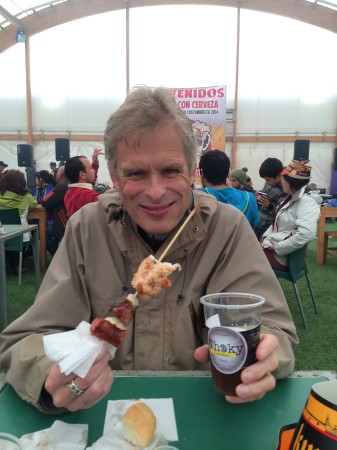 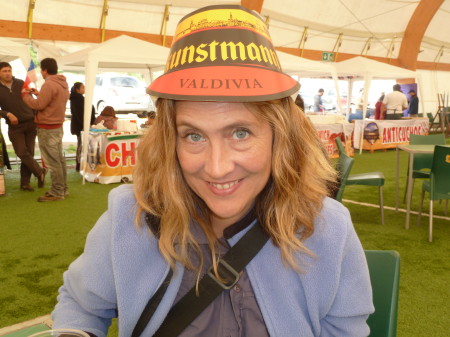 We ended the day by attending the Sinfonica at the Teatro Universidad de Concepcion. Smelling of charcoal and beer, we sat in a full house of Chileans as they enjoyed their national classical music. The concert (called Grande Chilenos Sinfonica) featured 18 pieces by Chilean composers. The symphony was accompanied by vocalists Claudia Melgarejo, Miguel Angel Pellao, Ramiro Vera, and the Coro Universidad de Concepcion—all conducted by Carlos Traverso. 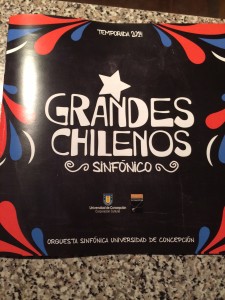 I don’t know much about music in general. Those who are familiar with my tastes would call me a throwback to the disco age. But I thoroughly and completely enjoyed the concert as few others I’ve ever attended. Both Bill and I were awed. The music was surprising. Just when you felt like you were moving with it, the direction changed and the mood shifted. I wish I had the words to describe it, but I feel like I did when I first started tasting wine and didn’t know to describe a pinot noir as “earthy” or “full-bodied.” And I wish I could have a recording of the whole thing! My favorite piece was a long one called Fantasia Sinfonica that made us feel like we were watching a war. One side is winning, and then the opponent gains ground so our side restrategizes and gathers strength. They grow tired though, and need to take a rest. During furlough, a love affair breaks out between the general and a woman he met at a party one night, which gives him new inspiration. So he goes back into the fighting with renewed vigor and moves his troops to the right and then to the left and the right again. And finally, victory is gained and the whole country celebrates with a wedding.

We came home and fell into bed with the sense that we had really experienced Chile.