We’ve been here for more than a week!

So far, Bill and I have both found our own “signature routes” to run daily. “Signature route” is what we call the routes we run at home–the ones we run from right outside our door and can do without thinking. A signature route is crucial for the days you don’t feel like running (right, runners?). You just have to put your shoes on and forge ahead without much planning.

Here’s my new signature route: I go out my door and turn left. Straight on Los Olmos (our street) until it Ts off with Edmundo Larenas in front of the University. Then I turn right and go around the University until I hit the track. Two to three miles on the track (whatever my poor PF can bear). Next I cut through the campus, turn right back onto Edmundo Larenas briefly before catching the bike path alongside Victor Lamas. The path on Victor Lamas goes for quite awhile, but I cut up a steep set of stairs that curves to the left and puts me back on my own street. Voila! 5 miles (or 4 if my foot is hurting and I cut my track workout short).

As you might imagine, Bill already has a full race schedule for us. He’s even put me on a training regimen for a marathon coming up here in Concepcion. So far, my foot is feeling pretty good, so if I keep up on icing it and talking sweetly to it, I’m hoping I’ll be able to get ready to do a slow 42K in October.

Tonight we went to the art museum on campus and attended a tribute to Pedro Millar, an artist from Concepcion who recently passed away. Bill and I both love art and appreciated the invitation to attend the memorial. A sizable group of people who knew and loved Professor Millar gathered around to tell stories and to hear his grown children sing a few songs in his honor. Of course I didn’t understand a word of it, but I gleaned the sentiment. 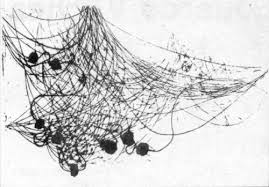 One of Mr. Millar’s famous images

After the reception, we wandered through the campus, which is vibrating with youthful energy now that classes have started for the semester. 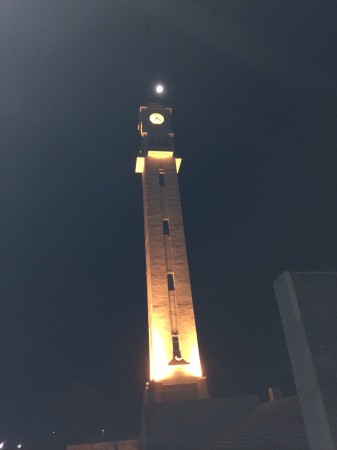 The clock tower on campus with the moon shining above

Then we came home to crash. Every day I’m so tired by the time night arrives–so worn out from trying to understand things.

Have I mentioned how scary it is to me to settle into one (foreign) place for a few months like this? As a seasoned traveler who has been to about 20 countries all around the world–for short trips–this experience is simply so different. Here I need more than a traveler’s vocabulary to order food and find the right bus station. Here people actually talk to us! Today, when I came back from my run, Julio asked me how far I’d gone. So far, so good. “Siete kilometros,” I said. Then he proceeded to tell me about a different route I could take if I wanted a variation on what has become my daily trek. I only know what he was telling me because a.) I’m very intuitive, b.) he was using gestures to describe the directions he was giving me, and c.) I caught the words “via” and “Victor Lamas.” I do think I understood the gist of what he was saying, but I had nothing but a smile and a “gracias” to give in return (and I can’t roll my “Rs” so I sound pretty guttural, I’m afraid).

I am such a verbal person–so very dependent on words to show my openness to friendship. I’m afraid that if I can’t speak, I’ll hurt people’s feelings. And I’m worried about missing out on getting to know really awesome human beings because of my lack of language skills.

But friends, fear is not a reason to stay home. You know this, right? Coach Carol back in Bellingham talks about “pee your pants” risks: the things we decide to do because we know they will stretch us and make us grow–but they are scary. What scares you may just be exactly what you need to press into and do. There was a day many years ago when I was absolutely terrified standing at the starting line of my first marathon. And over the years, I’ve never gotten really “good” (i.e., fast) at running, but I did kick the fear. And now I’m a veteran runner.

Well, learning another language has always been one of my big hurdles. I took years of French and still can barely order croissants at a bakery, so I may not have a natural knack for language–but again, not being “a natural” at something is ALSO not a good reason to avoid doing what you want to do, is it?

My challenge in the next couple of weeks will be to find either a class or a tutor (or both), so that by the time I leave, I can at least go shopping without my sidekick (aka, Bill). What’s your challenge these days?