As I may have mentioned, my husband Bill has recently retired from a thirty-year career—most of it as the director of an international exchange program at Western Washington University. This has meant he’s had a little time on his hands to catch up on reading through the stack of books that has been piling up on his nightstand for a long while. His retirement also means I can put him to good use guest blogging for me from time to time. So… allow me to introduce Bill with his first guest post/book review—hopefully the first of many more to come!

Not long ago, as I was sipping on an IPA in one of my favorite local Bellingham establishments (Elizabeth Station), someone whom I’d never met approached me pointing excitedly at the book I was about to open. “The guy who wrote that book is an amazing scientist… biologist, I think. He was also quite a runner in his day… I mean…a world-class ultramarathoner!” With this totally unexpected introduction to Why We Run: A Natural History by Bernd Heinrich, I couldn’t wait to jump in. 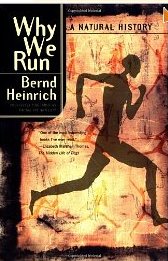 Apparently, Why We Run was previously published under the title of Racing the Antelope: What Animals Can Teach Us about Running and Life, and to be honest I prefer the original title simply because this is a book that reminds us that insights into our own ability and passion to run come only from observing other animals and learning from them. And this is exactly what Heinrich does in his book. Framed in the context of chasing after his “dream antelope” of breaking the American 100-kilometer record, Heinrich explores, as a biologist and zoologist, how to prepare to run that far.

In a nutshell, this book shows what’s involved in running an ultramarathon race while pulling together the race experience with insights from his studies of animals. What can we learn from insects about running? What can we learn from birds about endurance? What does the antelope have that we don’t…and how did it become such an amazing runner? What insights into endurance running can camels provide us that antelopes can’t? And what’s the lesson to be learned from frogs? Why We Run takes a close scientific look at these questions and many more.

I found the chapter on racing fuel to be fascinating, as Heinrich experiments in his own training for the 100-K with a range of scientific insights about carbohydrates, fats, and glycogen depletion.(At one point in this chapter, Heinrich even quotes one of our legendary local Bellingham ultrarunners, Jim Pearson!) Heinrich’s training process was based on a series of experiments, some quite entertaining. His third experiment went like this:

“My third experiment was with a combination of lots of carbohydrate and lots of water – beer. I had done my trial runs on a 20-mile course, making a beer cache 10 miles out under some bushes. I timed myself out to the beer, downed the twelve-ounce bottle, then ran on and timed myself with the stopwatch over the second part of the course. If I slowed down, I figured I’d better try something else. If I speeded up, I could be onto something. I had speeded up slightly. For a real test, I entered a long road race toting three six-packs. Presuming a fast racing pace, I planned on having one every 4 miles. We took off like a rhinoceros in rut, and I was soon in the lead, chugging one beer after the other and increasing my lead even further. While starting to congratulate myself on the great run, with just three beers left to go, I suddenly felt weak. With two left to go, I lost all my will and just dropped out. I felt sick. More fine-tuning would not have been a bad thing if I’d really planned on this as something serious. However, I did not repeat the beer experiments. Instead I tried Ocean spray cranberry juice…..”

The last few chapters of the book, in which Heinrich describes his final preparations for the 100-K and the race itself, are worth the price of the book. He sets the stage for the race this way:

“This experiment of one will be, in the parlance of science, an anecdote. Nevertheless, it is still an experiment, not just a random happening. It is an experiment because I have been guided by logic derived from a vast body of experimental work on animals, and backed up by my own experiences. I’ve tried to incorporate the empirical facts and experiments toward achieving a scientific outcome, and I have the satisfaction of knowing that I’ve done all I thought I could do.”

If you enjoyed Born to Run, you should definitely take a look at Why We Run. It’s a wonderful blend of world-class distance running with a firsthand account of the biology of running, by a leading authority on the subject.

Postscript: Two weeks ago while down in AZ to enjoy baseball’s Spring Training, I decided to register for a half-marathon which started and ended on a paved trail not far from the Mariners’ training complex. While I enjoyed the race, it was clear that I didn’t heed the insights into endurance running that camels (as experienced desert runners) could provide me with (see chapter 10!). Suffice it to say that camels are masters of heat management and water economy, while I did a lousy job of both on a warm Arizona day.

My thanks to my beloved for his review! I’ve yet to read the book, but it’s in MY pile now. It’s my goal here to post more running book reviews. Have you read Why We Run? What did you think? What other running books are you reading? And what are you learning from them?