I want to tell you about a wonderful man in my running community. John Schick is one of those runners who has always taken me seriously, even as he qualifies for Boston and I bring up the rear. He was one of the first men to read my book and quick to tell me he loved it. Everyone who knows John appreciates his smile, sincerity, kindness, and enthusiasm for friendly competition. And those who know him (and those who take my word for what a lovely human being he is) have the chance to support him as he raises funds for a cause that means a lot to him. Even if you don’t know John and don’t take my word for how much he deserves our support, consider the cause!

John is raising funds for the Dana-Farber Institue which conducts cancer research. Here’s his story:

“April 25th was a day when time stood still for me. That’s the day my dad, John H. Schick, called to tell me, ‘Son, I’ve got the T-cell lymphoma.’ I’ll always picture the light shining through the trees, as I sank down in the chair and tried to make sense of what I’d just heard from this man who had been so healthy and robust for his first 80 years.

“Only one week earlier I had run my first Boston Marathon and my dad had been my biggest fan. How could this be happening? During the race I had noticed a lot of runners who were running to raise money for charity. I also noticed the extra level of respect they earned from the 500,000 spectators who lined the course. I remember thinking someday Boston would be great to run for a bigger cause than just me. Little did I know that one week later I would have my cause.” 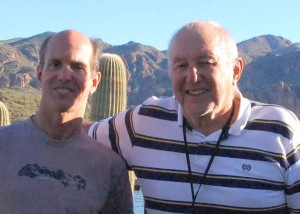 John and his dad

“The Farber Institute has been on the leading edge of cancer research since Sidney Farber first invented the use of chemotherapy in the 1940’s. One of the more compelling reasons for choosing the Dana-Farbe rInstitute is because 100% of all funds raised go directly to cancer research.”

So what is John doing and how can you help? Here it is in his own words:

“On April 17, 2012, I will be running the 116th Boston Marathon in honor of my dad who is courageously battling an aggressive and rare form of T-cell lymphoma. This will be my 10th marathon; in addition, I’ve run 6 ultra-marathons and last year completed an Ironman Triathlon. Training and running
this marathon will be the easy part of my journey. Asking people for money to support this cause is a huge jump out of my comfort zone. Of course, dealing with chemotherapy treatments is beyond anyone’s comfort zone. Watching my dad battle this ruthless disease makes raising money and running 26.2 miles seem tame by comparison. Also knowing that cancer will affect 1 out of every 2 men and 1 out of every 3 women in the United States in our lifetime really makes this about more than just my dad; but he is my personal connection. I have set an ambitious goal of raising $8,700 by April 2012. I, along with 549 other runners, am working to raise $4.8 million to support the Claudia Adams Barr Program in Innovative Basic Cancer Research which is a department of the Dana-Farber Institute. Money raised will help leading edge scientists solve the cancer riddle.”

If you care about this issue and want to help John in the fight against cancer, go to his fundraising page (http://www.rundfmc.org/faf/donorReg/donorPledge.asp?ievent=484862&supid=338423199) and donate!

Also, follow along on John’s Blog as he trains and raises funds. You won’t be sorry to get to know him.