Yesterday morning at 8:00am, Bill and I boarded a ship called Coastal Explorer and headed from Seward out of Resurrection Bay. The end point of our cruise was to be Holgate Glacier, but in order to get there, we had to pass through the Harding Gateway where we encountered a pod of Orcas. I don’t know if I’ve ever mentioned that one of my very favorite things to do in this world is to watch Orca whales. As part of our wedding weekend we went whale-watching directly from Bellingham Bay. Then in Australia back in 2007 we took a cruise into Nelson Bay and watched as a single, gigantic Humpback Whale breeched for over an hour. I was in grateful awe to see him, but watching a group of Orcas remains my favorite thing. It’s like peeking in on your neighbor’s family dinner. Orcas are a matriarchical species. Each pod follows its matriarch through the waters looking for food and breeding in season with the males from other pods.

Hanging out with a family of Orcas is a very intimate experience. In the pod we saw yesterday, there were several calves poking above the water beside their mothers. The family stayed with our boat for at least forty-five minutes before we had to move on toward the glacier. Forty-five minutes of heaven! 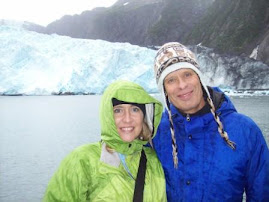 An hour later, the glacier was as spectacular as the whales. The captain pulled the ship up close and we sat with the motor off, waiting for large chunks of ice to break free and crash into the water. We weren’t disappointed. Large pieces of the glacier wall plunged down hundreds of yards, echoing into the canyon like thunder on a rainy day. Although it is magnificent and beautiful to see the calving of the glacier, we were saddened to hear that the Holgate Glacier, in fact the whole Harding Icefield in Alaska and all of the glaciers it feeds into are receding so quickly that the ecosystem in the area is being affected in ways still in question. 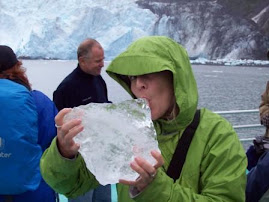 After some time with the glacier, the boat headed back toward Resurrection Bay and stopped at the Chiswell Islands on the way to see the bird rookeries. I’ve been nervous around birds since I was a little girl, but over the past few years, I’ve learned to appreciate the diversity of the bird kingdom through my travels. At this rookery, we watched the very colorful Puffins nest in the rocks above while sea lions swam in the waters below.
Amazing day.

Tomorrow we run Humpy’s Marathon in Anchorage. Today we picked up our race bibs and chips and spent the day in town. The weather looked promising, though I’ve heard that Anchorage has had the highest number of consecutive rainy days they’ve ever seen in their history. We keep our fingers crossed for a reprieve in the morning. 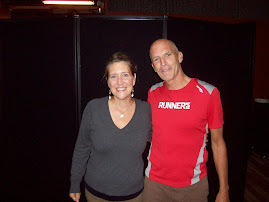 At the pasta feed this evening, I met Bart Yasso, whose book, My Life on the Run, is next on my reading list. He is a well-known runner and a Runner’s World contributor. But he’s also a really nice person. We chatted about South Africa (he recently ran the Comrades, a 55.9-mile race that starts in Durban), and a bit about writing to inspire others. Tomorrow, Bart will be announcing the names of runners as they come across the finish line and he promised to stay to end for the back of the packers! What a treat.

If I’m not too tired, I’ll post a race report tomorrow night. If I’m trashed, I’ll post it early next week. Peace to all.