A few days ago, there was a terrific article in USA Today about travel running: running as a way to see the sights when you’re on vacation. You might think that what Bill and I did as we quested to run a marathon on every continent was the kind of travel running referenced in the article. Actually, while the marathon routes we chose did take us through some pretty spectacular places (the Weskus National Park, Old Panama City, the Mudgee Vineyards), “travel running” is something different altogether. 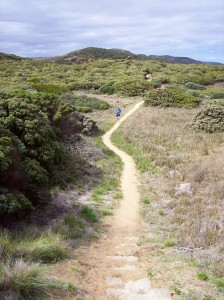 Moi on the Great Ocean Walk in Australia!

I didn’t write about it much in Second Wind, but Bill and I do quite a bit of travel running in addition to our racing when we travel. We’ve run through the Saguaro National Park in Arizona, for example. We chose a route that might take us past memorable land marks and then we went for it at a leisurely pace. When we run for sight-seeing, we always take water along–and a couple of granola bars. We walk when we feel inclined. We stop to read signs and take pictures. And we cover a lot of ground in a fraction of the time we could if we were walking or even taking taxis. We’ve done this in Australia on the Great Ocean Walk.  We’ve also done it at the Grand Canyon (11 miles along the South Rim of the Canyon), at the Organ Pipe National Monument, in the Joshua Tree National Park, on the circuit of monuments in Washington DC (Jefferson, Lincoln, etc.), on parts of the trail along the W in Torres del Paine, Chile, along the greenways in Tokyo, through downtown Sao Paulo, Brazil into Ibirapuera Park, atop the Sea Wall in Vancouver, BC, and so on…. It’s fun.

What are your favorite travel running routes? Which routes take you on a quick sight-seeing tour and give you the flavor of a place? It’s long been a dream of ours to travel with a handful of other runners to do spontaneous runs of the marathon distance or longer along trails and through the national parks of the world. Where do you dream about running?