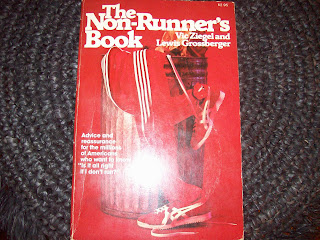 Last week at a used book store in Cheney, Washington, I picked up an insightful little volume entitled The Non-Runner’s Book: Advice and reassurance for the millions of American’s who want to know “Is it all right if I don’t run?”.

So this book was published in 1978 by a pair of fellows who call themselves Vic Ziegel and Lewis Grossberger, apparently the pseudonyms of “a pair of rich and successful sneaker manufacturers who frankly are ashamed of the social and physical ills they have caused by conspiring to make running fashionable as a means of boosting world sneaker sales.” They claim that “writing this book was their way of atoning for the damage they’ve done and of preventing further harm from coming to future generations.”

Now is it even necessary for me to make a disclaimer before I go on to say that this book is HILARIOUS? I’ll quote from it over the next week or so (It’s out of print, so my copy is extremely valuable – it was a steal for $1.65!). But let me just give you the bullet points from the back cover so you can see what you’re in for:

*How to avoid the Boston Marathon (even as a runner, I think I’ve got that one down)
*How to talk to a non-runner (I know, Deb, you hope I memorize this section)
*The Zen of sitting
*Non-running in the People’s Republic
*How non-runner’s cope (I can’t imagine)
*Sex and the non-runner (now there’s one that should remain taboo)
*Where celebrity non-runners non-run

And I’ll bet you can’t wait to find out what “the nine greatest non-running movies” are! Feel free to send in your faves! Stay tuned for the gripping details later this week