R is also for Racism 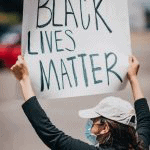 This is the R post I really want to write.

Friends, what a ridiculously intense time we have going on in our world right now. But what a crucial time this is, too. In addition to the pandemic (wear your masks when around people, buddies), we are working our way toward an important election and we’ve got some major social change on the horizon.

I want to add my voice to the conversation about racism because as a white person, I fully believe that my silence makes me complicit in injustice, and I’ve been far too silent over the years. I know I have readers on both sides of the aisle, so I’d love to support a conversation that builds bridges (if possible). My work as a therapist has always been 90% about reconciliation: mostly reconciling IDEAS of the world to the ACTUALITY of experience. And I’m still hearing some white friends talk about how the protests are going too far or how “making all that ruckus on Capital Hill” is bringing less peace instead of more peace (as if any revolution has ever occurred without chaos and unrest as precursors).

If you are white and you think voicing those kinds of ideas doesn’t constitute racism and doesn’t bely the racism that lives inside of you (and me), let me tell you a story of something that happened to me about 15 years ago. This is a story about how an ISM of mine—in the case of this story it is SEXISM—came to my awareness. This is a story about how a thing can live in your body even if you don’t *think* it lives in your head.

I was on an airplane going somewhere. At this point I don’t remember where I was flying, but I do remember that I was flying alone. The plane ascended into the sky and reached its flying altitude when the intercom came on, and the pilot spoke to welcome us onboard. Before I go on, you should know that unlike a lot of people, I love take-offs (and landings). I love the moment of lifting off the ground, the moment when I ALWAYS think, How in the world does this heavy thing suspend itself in the air? The moment I wonder about (but never have bothered to research) the facts of flying in an airplane. The fear IS the thrill of flying for me and I lean into it. The only moment better than take-off is when there is turbulence, when I close my eyes and give in to the quaking and wonder if we will fall to the ground or be struck by lightning and be blown to pieces. Don’t judge me. I don’t have many things in life that make me feel completely out of control of my very existence. Flying is one of those things. I adore it—and partly because of the fear.

So anyway, the pilot began to speak. SHE introduced herself and told us how long our flight was going to be and invited us to relax and enjoy the ride. This was the FIRST TIME in my life (and y’all know I’ve taken probably hundreds of flights) I’d ever heard a woman’s voice identified as the pilot.

As soon as I heard the voice of a woman and understood she was our captain, a surge of panic ran through my body. I grabbed the edges of my seat and my whole core tightened. Not because of take-off and not because of turbulence did I fear this thing I love—flying—but because the voice over the speaker was female. Thoughts ran through my mind before I could stop them: Can she handle this thing? Does she have a male co-pilot?

Peeps, if I love flying, something I love even more is my feminism. I am committed—and have been for a long time—to not only understanding and embracing post-modern feminist philosophy, but to LIVING increasingly committed to embodying my chosen principles. So what the hell was up with my panic? I quickly understood what was happening. My BODY didn’t know that I believe women are as capable and smart and skilled as men at EVERYTHING. My body had been conditioned by decades of male pilots welcoming me onto their airplanes, to the point where it (my body) didn’t even know there were some women who do the same job. My body thought this was a man’s role and men were uniquely qualified to fly planes. Not my mind. My body.

I felt troubled by my response. The implications of my reaction came crashing down on me. What kind of other limitations did I assume for women? For myself? And how, if I didn’t address my unconscious assumptions, could I ever live up to my own potential? Did I somehow treat the women in my life as “less than” the men in my life? Without even realizing it? Did I privilege men in certain ways? Slight a woman friend with micro aggressions that neither of us noticed because we are both conditioned to expect such “little” woundings?

You see where I’m going with this, right? The ISM lives in the body even if it doesn’t live in our stated beliefs. The unconscious stuff is… well… UNCONSCIOUS! And we make choices (what we say, how we startle, who we look at first, how we enact our body language) from our somatic reality more than from our well-crafted ideology. And thus, we all carry racism (and sexism and heterosexism, etc.) around in our bodies.

I was listening to an interview on the radio the other day with an essayist—a black man—who told the story about how he rounded a corner and nearly bumped into a white woman. He watched the fear on her face when she saw him and then he watched, he said, as she worked with that fear and tried to ameliorate it, to hide it. “I will never understand why that fear lives in the white body,” he told the interviewer and made the point that history shows the white race has been far more dangerous to the black race than the other way around.

And I thought of my female pilot. All of our feelings/reactions/deeply held understandings of the world live in the body. However they got there, the conditioning is real.

When a friend of color (or a white friend on the journey with you) points out your racism, or when you think your ideas about our current political struggle are complete and sufficient, consider the possibility that there is an underground trove of unexamined beliefs living in your BODY. When someone else sees your unconsciousness, and bravely offers you some insight about it, an awesome response is, “Wow, I didn’t see that. Thank you.” No need to be defensive. We’re all growing.