O is for Out of My World View 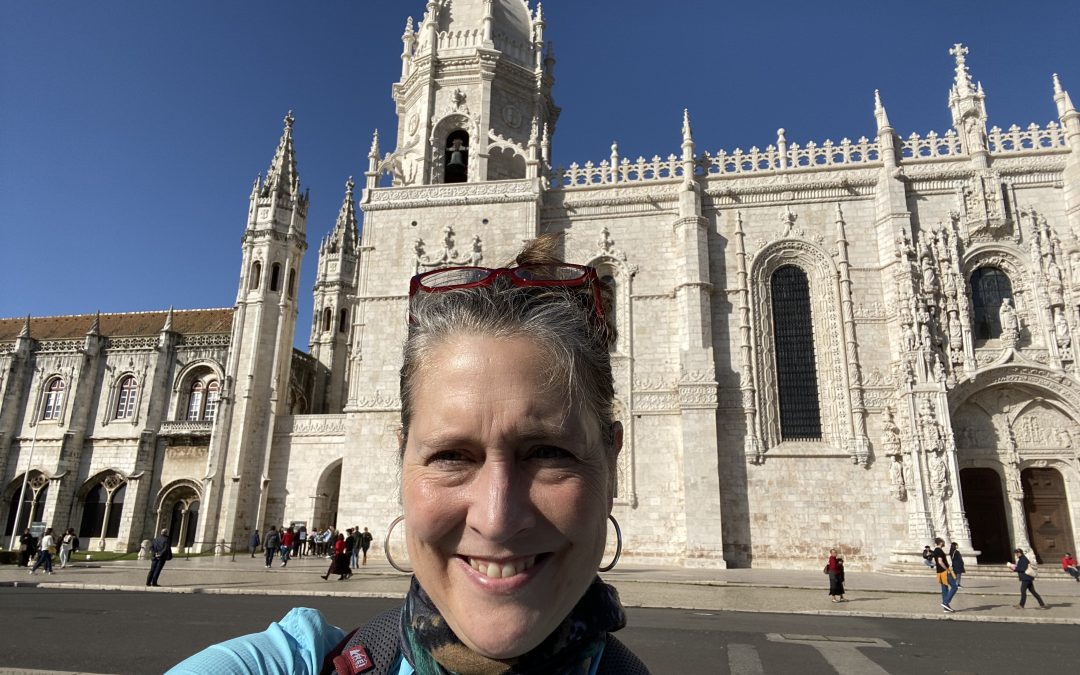 Travel is the absolute number one way I know to get out of my own stuck world view and open up to new possibilities.

I’m in Portugal now working on a book. You see, last year I went to a financial planner whom I paid to ultimately tell me I needed to save $12,000 per MONTH if I wanted to retire at age 67.

My jaw dropped. Then I went home and cried.

I barely managed my panic through the rest of that week, and then I started to remember something. I thought back to the trip my former husband and I took to Panama several years earlier for the marathon we ran there. I remembered hearing that there was a “retirement community” of expats somewhere in a part of the country we didn’t visit.

A retirement community in Panama? I pondered. What does that even mean? Whenever I’ve thought of growing older, I’ve always imagined myself still contributing to the world—maybe in exchange for money somehow—while traveling as frequently as possible to other parts of the world but always holding a home base somewhere in the United States. Only after the conversation with the financial planner did I understand how retirement works financially. Once I saw that Social Security, plus my meager investments, plus whatever I continued to earn might STILL not provide for me adequately, I realized I needed some new way of thinking about my future. And it had to be a way of thinking that didn’t create fear and panic (because fear and panic are not sustainable and, contrary to popular belief, they do not provide adequate motivation for positive action).

Maybe, I thought, I should explore the idea of living abroad permanently (I’ve lived abroad briefly twice in my life before, but always with the intention of coming back to the States). So I went to Panama to see the expat community in the cloud forest of Boquete. While I was there I stayed with a lovely woman—a friend of a friend—named Carol. Carol had sold everything she owned, give up her Medicare benefits, bought a condo on a golf course, and moved herself (at 88 years old) to Panama. Talk about reinventing yourself.

I came home inspired but (for reasons I’ll write about later) not completely sold on the idea of moving to Panama permanently one day. What I WAS sold on was the idea of exploring the idea of finding a safe, interesting, supportive place to land when my working years are over.

Panama was last year. This year I knew I would explore Portugal as one option for retirement. All of my research told me that U.S. Citizens (among others) are moving to Portugal in large numbers and that about 40% of Unites Staters who live in Portugal are retired people.

I was able to connect with two couples who’ve moved to Portugal to retire.

Laine and Tom (thanks to Janna and Andrea for the connection!) live in Porto and showed me and and my traveling companion (hi Pam) a great time one evening regaling us with stories of how wonderful the Portuguese people are. They are in Portugal for good, they say. They told me they’d wanted to retire early and needed to find a place they could live with the savings they already had. They also love to travel, so they needed to find a way to land somewhere that had easy access to other European countries they wanted to visit. They approached their move with a list of criteria and looked for a country that matched what they wanted.

The second retired couple I connected with were Jeff and Jolene (thanks Wendy and JoAnn for introducing us). These two came to Portugal on a vacation and fell in love at first sight. They went home and pretty much immediately set things in motion to move their two greyhounds and their entire lives over to this little country on the Atlantic Ocean. They told me, “This is our permanent home now.” They took me to their home and showed me how they’d settled in and were getting to know their geography and their neighbors.

I was charmed by the stories of both couples—and inspired by their leaps of faith (just as I was by Carol’s hutzpah in Panama last year). And as I wander this country, I’m asking myself, “Could this be my new country one day?”

Time will tell. But one thing is for certain, I can see clearly that there is more than one way to live inside my means as I age. And as a person who believes in reinventing oneself whenever life requires reinvention, I’m inspired by new friends!