L is for Love 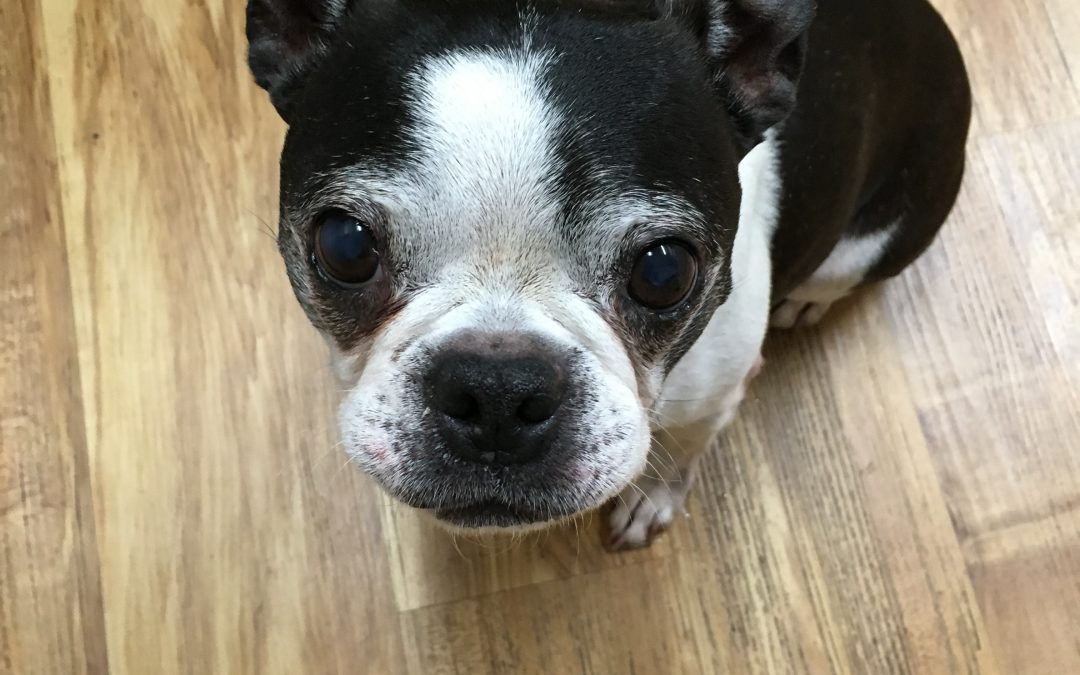 She came into my life at a happy time. We called her Fuji-san, like the mountain, because her personality was big. And I brought her into the family to round out my little brood of furry creatures already consisting of Bronte the fluffy cat and Jane the pug.

I’d always wanted a Boston Terrier because my maternal grandparents had had one named Paddy before I was born and they talked of him regularly. They told stories about his mischief and intelligence, and I thought a dog with smarts would be a good counter balance for Jane’s cheerful but simpleminded disposition. Maybe I thought Jane, who was completely indiscriminate about what she would eat and impossible to train to voice command without a treat in one’s hand, needed some supervision, some guidance.

I found a breeder who lived out near the coast who had a 12-week old female she was still trying to adopt out and asked if we could meet so I could see if her pup would be a good fit for our family. I got out of the car at the park where we’d agreed to convene, and the woman got out of her car with the pup’s momma so I could get a look at her. Then she opened the backseat car door and Fuji jumped out and ran for me, full force.

She leapt into my arms and licked my face like she was tasting to see if I was the right person for her. And yes, she decided, I was perfect, so we left together.

Fuji bonded with Jane and Bronte immediately. And she became a central character for all of our lives. She often sat right on top of Jane in their little shared doggie bed as if to make sure Jane behaved herself—or at least didn’t get into anything without Fuji’s approval. She chased Bronte to tackle her to the ground, and Bronte always submitted because that’s what you do with puppies. When she was old enough she became a running companion to me and my then husband, and he taught her to stay at his side without a leash—definitely proving her superior intelligence to the pug, who never wanted to run anyway.

I didn’t tell my grandparents that I was getting another dog. They already loved Jane and often watched her for me when I traveled, which was going to be even more in the years ahead. I didn’t want to ask if they would babysit an extra until I found one and made them fall in love with her—sneaky, I know, but I was sure this was the best route to a yes.

I brought Fu over to their house right away after she chose me as her person and let her out of the car to sniff in the front garden while I held Jane in my arms and rang their bell. I had a key, but I wanted them to both come to the door to meet our new addition. Grandma answered and greeted Jane and me respectively. I put Jane down to toddle in to find Gramps.

I heard him from the other room, “Well hello Jane,” and then bellowing toward the front door (Gramps was a shouter), “And hello Cami.”

I shouted back, “Gramps, I need your help out here, can you come to the door.”

A moment. A shuffle as he dislodged himself from his recliner.

Then he came to the door to stand beside Grandma, who still hadn’t seen Fuji sniffling in her flowerbed behind me.

“What can I do for my favorite granddaughter?” He always called me that. I was his only granddaughter out of seven grandchildren.

“There’s something out here I need help with,” I repeated. Then I looked over to the garden and nodded my head in Fuji’s direction. Fu had her nose deep in a hydrangea bush behind a row of annuals, hidden but easy to make out because of the contrast of her black and white against the color of the blooms.

Grandpa and Grandma followed my gaze and Gramps saw her first. He didn’t miss a beat before he shouted at me, “Get that goddamn black and white thing…” I waited for it, “inside this house right now.”

I called to her and in we went. Grandpa led us to the living room and sat back in his chair. He called for Fuji who sprinted at him, jumped onto his lap, braced her front legs against this chest, and stuck her rough tongue into his ear, where she groomed him ferociously for a good twenty seconds before shifting her energy completely and curling up comfortably in his lap. For his part, my grandfather pinched his eyes closed at the odd feeling of a little tongue in his ear and pretended to enjoy it with a false moan of pleasure. Then, when she’d settled down, he placed one of his own arthritic and twisted paws on her soft fur and asked, “When did you get us another dog?”

Little Fuji passed away two weeks ago. I have grieved hard, but mostly that grief happened while she was still with me. In her last year and a half of life she was not the dog I’d known for her first 13 years. Jane died last summer and Bronte and both my grandparents the year before that. Fuji’s grief at all the deaths was heavier than even mine. She lost control of her bladder and sometimes her bowels. I was treating infections and back disease. She developed liver and kidney failure. I’d asked the vet to put her on an anti-depressant, along with all the pain meds and antibiotics, which didn’t seem to help much. In the end, I was having daily discussions with her about whether it was time to put her down, but she took the decision out of my hands. While I was at the Dave Matthews Band concert, the two young women who were staying with Fuji called me to tell me she’d lain down in her bed outside and had fallen asleep never to wake up.

I’ve loved a lot in my life, mostly pretty imperfectly and mostly expecting something in return—friendship, respect, kindness, curiosity. I think human-to-human love has conditions. There are bare minimum requirements of treatment humans should extend to one another in their relationships, but animal-to-human love is a different genre of affection altogether. Beyond thought, beyond contract—spoken or unspoken, beyond rational understanding. In my relationship with Fuji, some imprinting, perhaps a neuropathway in the brain that wound itself around my love center and whispered things humans don’t know the words for, expanded my ability to commit, to take care of, to be patient with, to wonder about another creature.

And now she’s gone, but she’s left a better person in her wake.