How to Travel Economically inside the United States

In Bill’s presentation at the University of Concepcion on US history and culture, one of his audience members asked him about some economical ways to travel in the United States. He puzzled over the answer because the US is such a big, spread-out, car-dependent country. Most students who travel abroad won’t have access to a car. But when Bill got home, we started brainstorming answers to this question. Bill and I have traveled all over the world and through much of our own country after all and, aside from airfare, we’ve often managed to travel “on a shoestring.” I told him, I’d write a blog post to more fully answer the question of how to travel cheaply through the States.

I know some of you who wander over to my blog sometimes (particularly those of you who are Marathon Maniacs on a budget) may be able to add even more insight. Do comment below to add websites, ideas, and suggestions!

So… here are our thoughts.

The very best way to cut costs when traveling is to go with other people. A hotel room or a rental car will cost the same in most cases no matter how many people sleep or ride in it. Traveling with friends also creates a buffer for safety. To travel cheaply, you’ll have to depend at times on strangers for tips or help getting around. There is always safety in numbers, especially in unfamiliar places! 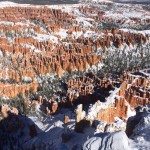 Choose One Region to Visit

Since the United States is so very vast, most of its own citizens never see the whole thing. When Bill and I travel, we do it region by region. For example, last year we did a “Southwest” trip to Southern California, Arizona, Nevada, and Utah. It’s true that we had a car to travel between the national parks we wanted to see, but we were able to see some of America’s most beautiful Southwest sites in about three weeks. We visited Disneyland, Bryce Canyon, Zion National Park, Grand Canyon, Las Vegas, and still had time to attend a few of Major League Baseball’s spring training games in Peoria.

Travel in the Off-Season

The busy travel times in the US are between June 1 and September 1. As soon as school starts for most children (the first of September), airfares drop, hotel prices go down, and common tourist sites clear out. September and October are still warm in most places around the Continental Unites States. April and May are also good times to travel if you want to get outdoors. January, February, and March are great times to travel in the far southern regions where it stays warm year-round. Be sure to check weather reports before you make travel plans.

Do you know about couch surfing? Couch surfing is when you sleep in someone’s house for a few nights and then move on to sleep in another person’s house. There is a whole community of people who offer their couches or spare rooms for other people who need a place to stay. You have to be a member of the couchsurfing.com website community to participate. Sign up and check it out. The nice thing about this site is that people can post reviews of the places they have stayed so you can see if someone’s house is clean and safe. You have to be a good guest once you arrive. Couchsurfing.com is a relationship-oriented way to find lodging. But it’s usually free!

Informal couch surfing is another way to find free lodging. Have you ever met anyone who said, “Hey, when you come to my city, look me up?” Maybe it was 10 years ago. Don’t worry. Look that person up! Tell them you will be traveling to their town, and when they offer to let you stay at their house, say yes!! The best thing about travel is spending time with local people, right?!!

Bill and I often stay at hostels. Hostels are not hotels. They have no services; you usually share a bathroom with other people; and they are not always as new and tidy as you might wish. But, they are usually (not always) pretty cheap. When you know where you will be traveling, google “hostels in Seattle” for example, and read the reviews. We’ve stayed at some terrific hostels, but we’ve also found a few I would never recommend to others. Hosteling International will have suggestions for you, but always do your research and read reviews.

About reviews: We are not extremely picky about where we sleep. I have only two important criteria: cleanliness and safety. I don’t mind if a review says, “The staff was not responsive,” because I don’t need people to take care of me. I do mind if reviews say, “There were insects in my bed,” or “A guy with a tattoo on his face knocked on my door and asked to borrow a cigarette.” Decide what you need in a hostel or hotel and look for that in the reviews.

In most cities you can find someplace that rents out camping equipment. You can still camp in mid-September or early October. There are many kinds of campsites: KOAs have showers, flushing toilets, and even wifi sometimes. State Parks or National Parks vary in terms of what kind of amenities they offer. All camping sites will cost you something—usually between about $8 and $30USD depending on how popular they are. The local visitor center can tell you where to camp.

Speaking of Visitor Centers, this is the first stop Bill and I make no matter where we go around the world (we’ve been to the one here in Concepcion several times already). They are sometimes called Tourist Information Centers or Welcome Centers and they usually have a big “i” on the outside of the building. In most places around the United States, these centers are staffed by local volunteers who know the area very well.

Like with couchsurfing.com, ridebuzz.org requires that you have an account to participate. Ridebuzz is a network of people who are offering or looking for rides—across town or across the country. As a rider, you agree to help pay for gas in return for a spot in someone’s car. Common wisdom in the United States is NOT to ever ride in a stranger’s car. Ridebuzz.org is working to create a safe way to share transportation. As with everything I’ve talked about here, always look at reviews and comments of other people on the site AND travel with a friend if you share a ride in someone’s car.

There are a few airlines which do not list their fares on kayak.com or priceline.com (these are both travel sites that let you compare

prices for airfare or hotels). Discount airlines may have cheap fares inside the US, but you have to go directly to their own sites to find them. Below is a list of some discount airlines we have used. NOTHING on these airlines is free. You will pay extra for water to drink, to check baggage, or even to reserve a seat next to your friend. In order to save money on discount airlines, you have to travel light, bring your own food on board, and be willing to sit anywhere on the airplane.

In many places around the world, busses are more comfortable than trains. In the United States, Greyhound busses can be a good, inexpensive way to travel short distances (say 200 kilometers), but they are not always comfortable or safe for long distances. If you want long-distance ground travel, the Amtrak train will be more comfortable. And train travel can be quite fun. The problem is that Amtrak is not always cheaper than flying. If you want to travel across the country (from Los Angeles to New York, for example), trains and planes may be comparable in price, but the train will give you a better chance to see the countryside.

We hope this gets our students thinking about how they might come visit us someday. Anyone else have tips for US travel on a tight budget? Chime in!!