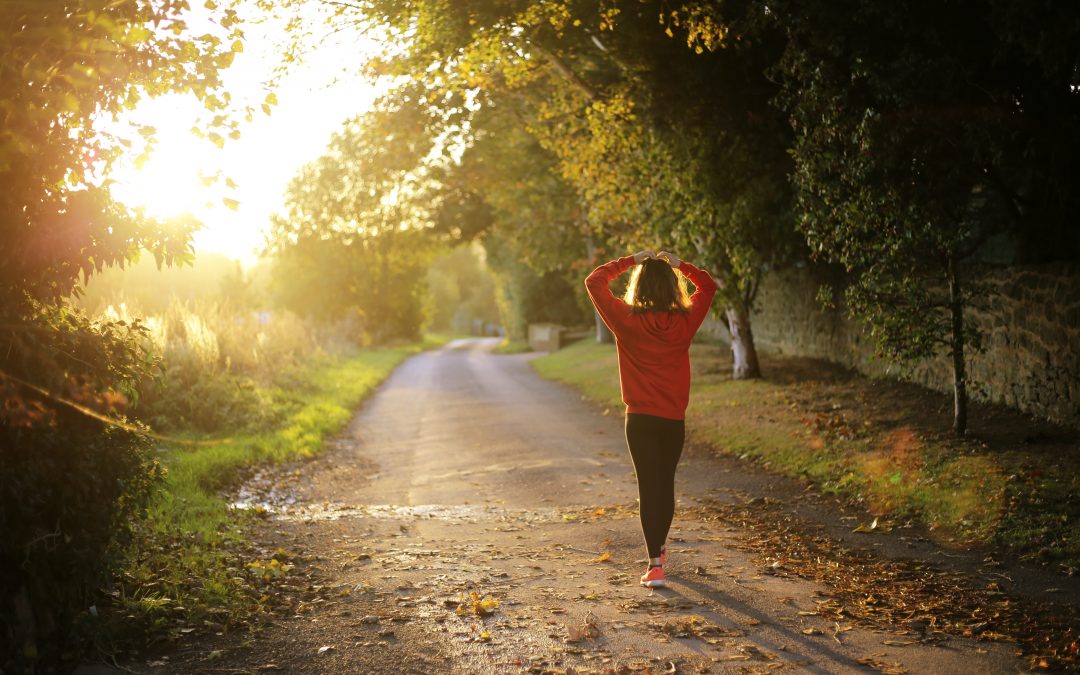 In a guest post below, my writer friend, Barbara Clarke, recounts the beginning of her running career. One of the best things that can come out of our efforts to keep ourselves out on the trail is our relationships with other runners. Do you run alone? Consider inviting a friend.

When my friend Joan asked me if I wanted to start running with her I didn’t hesitate. Not because I liked running, not even jogging, but running with her would mean that each morning at 5:00 she’d tap on my front door and we would have an hour to chat before our kids were even awake.

I’d been working for a summer in Kenya in 1981 and always walked five miles, sometimes ten or fifteen every day. I kept it up when I returned and joined a “woo-hoo” aerobics class three days a week, held in the elementary school gym. With this much already in place physically, I didn’t think running would be that hard.

On one of our early runs we ran smack into a deer in the dark—her gleaming red eyes said stop! We did and saw two fawns barely able to stand behind her. We burst into tears like the mothers we were, too, and walked the rest of the way home in a holy silence. Less wonderful was the day I tripped over a tree root on a special run and limped back to the car. Somewhere in these early months we made two important decisions. We would jog not run—who were we kidding? And, we would sign up for the Bonne Bell Women’s 10 K to be held in Golden Gate Park on February 27, 1983.

The pressure was on once we’d signed up for a run and we did less talking, more sprinting, ran on Saturdays.

The day of the race was chilly and looked like it could rain, dark clouds and San Francisco fog swirling above us. We were suddenly shy as newbies and moved to the back of the crowd of runners, many of them with “real times” under their belts. I’d never seen so many women in one place without picket signs protesting. If there is a pheromone that women about to run a 10K emit, Joan and I had received the scent. We were ready!

A few minor inconveniences occurred during the first four miles—they ran out of water and just like always there was a line for the ladies room. The porta-potty doors slammed open and shut, women emerged pulling on their shorts, not wanting to lose a minute. There was cheering at each mile and sometimes in between, families with dogs, and kids on bikes watched as clusters of determined, sweaty women ran past.

To be completely honest, my butt was dragging after mile four, my quads and knees started to complain by mile five, and only because we saw the sign that we only had a bit over a mile to go could I reach down and flip the psychological dial over to my reserve tank. By the time we could see the glorious finish line it was pouring rain, splashing up our legs with each footfall, and mixing with the sweat that was like a coating on our skin. I will never forget that last mile—how open my senses were to everything. I could smell the rain as it mingled with my sweat, how my heartfelt strong, and my legs suddenly filled with new energy. Joan and I joined hands just before the finish line and fell into each other’s arms in triumph after we crossed. Our time? We didn’t think to look. We did take our ribbons for finishing and a little packet of Bonne Bell products home for our daughters.

There were a few more years of runs we did together—the “Bay to Breakers” in Golden Gate Park and a local race in support of a woman who became the first senator from California—Barbara Boxer. Our prize then? Not a ribbon but yellow boxer shorts—those I didn’t keep. So many years later I still have the ribbon tucked in with keepsakes and my lifelong friendship with Joan.