D is for Death

D is for Death

You’ll think the subject of death a strange choice for someone who is focusing on “vitality” words. I would have thought so too until yesterday.

In the morning I got a sudden flurry of texts with bad news. A dear friend passed away. Suddenly. During the night. Alone in her home. She wasn’t even 60 yet. I want to tell you more about her, but I see that her family hasn’t posted anything about her passing on social media yet, so I’m not going to tell you her name or share identifying stories about her at this time. I’ll only say she’s someone I’ve blogged about before and she’s as dear to me as can be.

I was shocked by the news, and at first I wept for myself with pity that death had visited loss on me again. Too many losses in the last two years have left me raw, dangling at the edge of depression.

As the day wore on, I vacillated between tears and numbness. Then in the early evening, as I loaded my dishwasher and took care of a few other household tasks to give my mind some relief from heaviness, I began remembering several instances when my friend had comforted me during sad moments. And times when we’d collapsed into laughter together. Times when she’d depended on me for support. Times when she’d mocked my seriousness in exactly the right way at the right time. Memory after memory flooded in. Our friendship was an uncomplicated gift from beginning to end. Most of us don’t get many like that.

I felt a sudden rush of joy. Surprised, I sat down and let the feeling in and then I had an experience like nothing I’ve had before. My friend’s energy was in the room with me. I’m not saying her disembodied spirit was there—I’m not claiming she was literally visiting me (who knows?). What I’m saying is that I had conjured her laughter, simplicity, and salt-of-the-earth generosity with my memories.

My friend and I had run A LOT of miles together over the years. Out on the trail we talked about everything. From frivolous to grave, our conversations meandered. I can’t think of many topics we didn’t touch on at some point because we had so much time for wandering trains of thought. Because of this, I knew what she believed about death. I knew she wasn’t afraid of it. Expected an afterlife. Held that she would see loved ones again. In fact, she was one of the few people I’ve ever believed when she claimed not to be afraid of dying. Her phrase was, “When it’s my time, I’ll go,” and she made decisions in her life based on that assertion. 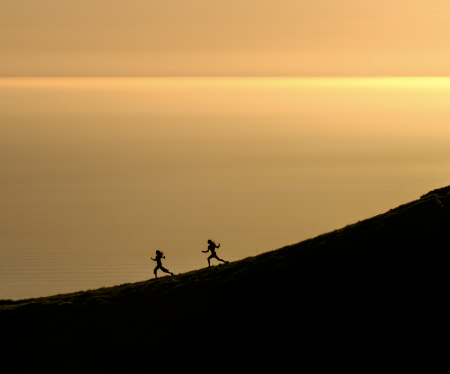 This morning as I woke (unlike yesterday morning when I received the news), I could feel myself making peace with death himself. He visits EVERY SINGLE ONE of us. Usually he comes many times for those around us before he brings us to the end of our own lives. He visits us because it is his only job. Everyone you know and everyone I know will transition out of this life. With my friend’s passing, I’m seeing that I can’t be happy unless I stop standing in front of this ocean, stop trying to keep back the coming tide with my hands held in front of me like a police officer directing traffic to halt. For the most part, dying isn’t in our control, so we waste our precious life resisting it, don’t we?

Something opened up in my chest yesterday. Today I’m breathing in gratitude for what has been instead of grief for what will not be. I know my friend would prefer this perspective. Gratitude is how she guided her life.