Well, we’ve arrived in Park City, Utah. Long hours of driving and adjusting to twenty-four hours of compromising with another person’s rhythms notwithstanding, we’ve had a good trip so far. The first night, we stayed in Oregon along the famed Oregon Trail. 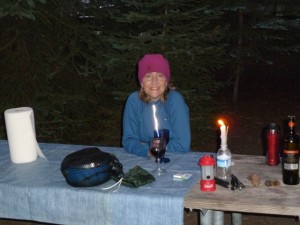 Cold, but keeping my chin up on our first night of the camping adventure

Did you know that there are still visible tracks left by the wagon wheels from the thousands of emigrants moving west in the 18oos? 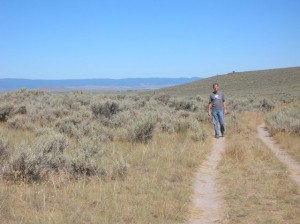 We had to make time to get to Park City in time to pick up our race  packets, but we did make a stop at the Oregon Trail Interpretive Center near Baker City. It’s shocking to think that whole families brought their belongings over such rough terrain, walking most of the way. 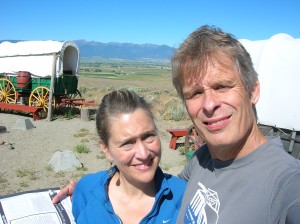 Next to the tiny covered wagons in Baker City

As I’ve probably mentioned. I’m not a huge camping fan. Tonight, we’re at a (glorious) Holiday Inn, but I’ve been keeping a good attitude. The second night we stayed at a campsite at Crystal Hot Springs which boasts one of only two places in the world where hot springs and cold springs come out of the earth side by side. While the bathroom was too far away from my campsite (for my taste), the pools were really quite awesome.

‘Night all. Must get to bed early.