All That It Should Be

Last year, the Boston Marathon, as we all know, ended in mayhem (for my report from last year, click here). And during this past year, literally millions of people—race planners, runners, volunteers, and fans—have been waiting and preparing to return to the course and redeem/take back/resurrect all that the Boston Marathon is meant to be: a full-on commitment to human achievement and community at its best.

For the first few days after the bombs went off last year Bill and I thought we hadn’t been much affected, but I, at least, found myself weepy for months nearly every time the Boston Marathon came to mind. As a longtime psychotherapist, I knew the symptoms of post-trauma stress, but in myself, the reasons for such a response were a little hard for me to ascertain at first. No one Bill or I knew had been harmed, after all. Why was I so often spontaneously choked up?

I’ve reflected on this question of course, and I think I know the answer. The 20 or so minutes when I stood under the letter “P” (for the last name of my fellow) in the family meet-up area waiting for Bill without knowing if he would emerge from the runners’ finishing area were a powerful 20 minutes. Without any information other than that there had been “explosions” and now there was “blood” (words I was hearing from passersby), I spent those 20 minutes wondering if I’d lost the best part of life. Where were the explosions? Had he been near enough to be hurt? Did he need me? Was he gone? What would I do if I lost him?

The very real possibility that someone you love might never come back to you can rattle your core sense of well-being—even if everything turns out fine.

Bill eventually showed up under the “P,” with dried sweat on his brow, limping in that way long-distance runners do after they cross a finish line, and I exchanged my frightening fantasies for unabashed relief and joy. And yet… an understanding of the fragility of life and the sense that my intentionally-crafted happiness hung by a thin thread took hold of my heart.

In spite of the fact that fate can step in one day and steal everything you care about, a person can’t sleep easily living on the edge of that reality. The only way to move forward after trauma is to do so with some sense of safety, some belief that there will be a tomorrow and it will be fine. But gaining this sense of safety after a scary experience is easier said than done.

The only way for me to move beyond my weepy response to the word “Boston” was to go back for a re-do.

Fortunately, there are VERY few things we cannot get a do-over for in this life. There are some not-to-be-done-over experiences, naturally. Terminal illness. Serious, injury-causing accidents (or bombs). But even love is something we get to try for over and over and over again throughout the course of our years on the planet. I would argue that most experiences offer us multiple chances to try repeatedly to get it right.

So this year, we again headed east and committed ourselves to making the running of the Boston Marathon (and the cheering for it) all that it should be.

Just like last year, I dropped Bill off near the starting line early Monday morning so he could catch the bus to the runners’ village.

Just like last year, I inched my way through heavy traffic to get to the Riverside T Station where I would catch the green line to the Woodland stop.

Just like last year, I stationed myself between miles 16 and 17 and kept my eyes open for runners I knew, sharing stories of previous races with fans near by, and screaming until I lost my voice.

Unlike last year, I had the privilege of watching an American man keep a healthy lead as he raced his way to winning first place with a finishing time of 2:08. (I met Meb Keflezighi once. See my post on this here.)

And then, just like last year, I found my guy amidst the hoard of thousands of runners and convinced other spectators nearby to help me catch his attention. Bill’s son, Jeff, was with me on the course this year. Watch as Bill sees us, kisses me, fist bumps Jeff, and moves on toward the hills in the final 10 miles of the race that would kick his ass.

Bill caught a cold this year before the race and eked out those last miles with a lot of walking. He finished in 4:08 (two hours exactly after Meb!). And Jeff and I were waiting for him under the “P.”

As I stood waiting, I felt the bubbling up of last year’s fear, but I faced it squarely—spoke to it with some equanimity and told it to settle down. And after 20 minutes, just like last year, Bill hobbled into the family meeting area a little worse for wear, but fine. 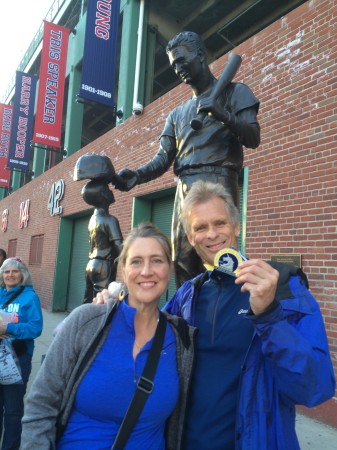 Bill and me at Fenway Park after the race