A is for Adventure

For the past several years in April, my friend Pam has blogged through the alphabet. I’ve usually followed along with admiration that she’s been able to crank out a coherent piece of writing for 26 consecutive days. Even in my most prolific blogging days while I was running all over the world, I only averaged one or two blogs per week. But I was out for a run yesterday and had a train of thought that has made me decide to blog through the alphabet. Let’s say it’s certainly my intent to finish A through Z, and I’ll do my best to crank these out before the end of July.

Here’s what I thought about on my run that led me to this commitment:

The past three years have been hard years for me. I mean f*cking super hard, like the kind of hard you hope doesn’t happen more than once in your life. I left a relationship that meant a lot to me but was not working for me; I moved away from my home and my community; my grandmother who helped raise me passed away; grandpa died of a brain tumor shortly after she passed; my cat of 16 years, Bronte, died a few months after that; I started two meaningful but time-consuming and expensive businesses to get myself back up to my earning potential and to support my life in Seattle; I got shingles; my little pug Jane was sick for a year and then died; my remaining pet, Fuji, has had a series of expensive and painful illnesses that has left her bladder leaking everywhere, plus she’s a basket case after everything we’ve been through and she has panic attacks when I leave her alone.

You see what I mean? It’s been a hard three years. Some of this I’ve had control over, obviously. Some of the choices I’ve made have felt like the best choices I knew how to make in difficult circumstances, but they were my choices. Other items on this list are things that just happened. Old people and animals get sick and die. The fact of this doesn’t make the loss hurt less, but it does mean I had a reasonable expectation that those deaths were likely to happen sometime soon. Maybe that helped alleviate even MORE pain than I might have experienced. I’m not sure.

But anyway, lately I’ve been telling my therapist (um, yeah, for SURE I’ve been seeing my therapist through all of this) that I think I’ve forgotten how to be happy. Even the travel I’ve done during this time (England once, France twice), the support I’ve had from good friends (a ton), the marathons I’ve run in the past three years (2), and the fact that my businesses have been successful have not led to much relief from my grief and acute anxiety. And I’ve been grieving for so long now, that I’ve started to get worried I forgot how to feel anything nice. Worry, rumination over my choices, sadness, and strategizing to get back on my feet have taken a toll on my energy (and my weight—I gained 15 pounds, which I’ve never done in my adult life before).

Two weeks ago S__ (my therapist) and I made a list of the feeling states I can’t seem to muster. Things like joy, calm, optimism, playfulness. And we started to hatch a plan for me to generate these states of being in my mind/body experience through meditation, thought-stopping negative trains of thought, self-soothing, and visualization. Unfortunately, the “vitality” emotions go underground when you experience a lot of trauma. There seems to be some evidence that the part of the brain that generates joy, for example, takes a backseat when fight/flight/freeze is repeatedly stimulated by sustained adrenaline.

Yesterday while I was running, something that used to give me enormous joy, I thought, “How could I get this to make me happy again? Maybe I could focus on one vitality state a day for the rest of the month—really drum it up in my memory, thoughts and in my somatic experience.” And then I thought of Pam’s blogging through the alphabet, and I realized I could share my process with you, dear readers (are you still out there?).

I don’t mind being vulnerable with you because I know you’ve had sh!t times in your life too. I know you’re on this metaphorical marathon with me. That you’ve lost a lot, failed at love, wished you could feel happy, and wondered how to get yourself back from tough circumstances.

There are 26 letters in the alphabet, so let’s call this 26.2 States of Vitality. Are you with me?

I’m reading through a book right now with my therapist that I’ll share from as I go (Relational and Body-Centered Practices for Healing trauma: Lifting the Burdens of the Past by Sharon Stanley). I’m sure I’ll add ideas from other books I’ve read, too, since I’m a bit of a self-help junkie. And maybe you’ll share what you know with me and together we can generate widespread somatic experiences of vitality—otherwise known as happiness.

To everything there is a season, and a time to every purpose under the heaven:

Let’s start with A.

A is for Adventure. Throughout my entire adult life, adventure has been crucial to my sense of well-being in the world. Next to “being of service,” something that I’ve been committed to since I was small, seeking adventurous experiences through travel and risk have given me immense joy and have made me feel expansive.

I remember the trip I took with my dear grandmother to Norway in 2002. We planned it during my divorce.  She wanted to get my mind off my sadness, and I wanted her to see Norway. Her father came over to the new country as a young man, and she had done a bunch of genealogy to find family she hoped to connect with. I was 35. She was 75, and I knew we ought to get this trip done before her mobility failed her. I also knew I was the most likely person in the family to take her since I was the person who had done the most international travel, and it was already like second nature to me.

When we got to Norway, we settled in with a cousin of hers who graciously agreed to host us. Each morning I took a long walk through the countryside in an area outside of Oslo while Gram talked with her cousin and recaptured her ear for the Norwegian she’d heard spoken as a child.

Maybe the elders were worried I would be bored, because our host arranged for me to take a motorcycle ride with a friend of his.

Ingar showed up dressed in leather and riding a sleek crotch rocket. I was VERY reluctant to don the red leather suit he handed to me and to climb on the back of his motorcycle for a zip through the Norwegian mountains. But I’d recently promised myself that I would embrace new opportunities put before me as much as possible, so I tried on the suit. It fit perfectly.

I’m not going to lie to you. That day on the back of Ingar’s motorcycle was an uncomfortable day for me. I didn’t want to wrap my arms around a stranger’s waist, so I held onto the little bar behind my seat all day and made the muscles in my arms ache with gripping as we swerved left and right through the countryside.

Finally, near the end of the day, Ingar said to me, “Do you want to see how fast my bike can go?”

I should mention that Ingar was not a young man. He was twenty years my senior and someone I couldn’t peg down with a clear judgment. Was he an older man who wished he was still young or a kindred spirit who enjoyed taking calculated risks? The answer to that question would help me decide whether or not to see how fast his bike could go. Was he foolish? Or fun? I took the chance he was the latter.

“Well, you’ll have to put your arms around me so the center of gravity is right. Then we’ll go as fast as we can on this straightaway.”

Ingar took us from zero to one hundred on a mountain road while I hung on for dear life.

And I felt my heart open.

At the end of the day, I knew I’d let life happen. I’d started out controlling it. Deciding I could keep myself back from full engagement, that I might give myself away too much (which I certainly have a habit of doing). But by the end I’d felt something new. Adventure had crept inside me.

So what’s this feeling in my body I want to experience now, informed by that memory?

Awe of beauty. A sense of bigness in my heart cavity.

A letting go into the possibility of death. An absence of a pressure in my forehead that I usually carry around when I’m trying to protect myself from bad things happening.

No thoughts of the future for one beautiful moment of time.

Can you feel it my friends? I can. I can feel the openness. For one day, let’s live here. I will if you will. 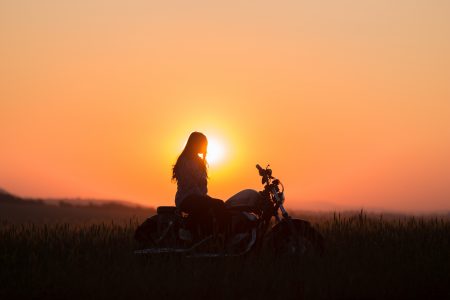