I met Leslie in the third grade. We weren’t friends at first sight, but we were by second or third sight. And we’ve been pals ever since, in spite of the fact that Leslie moved away and we haven’t lived in the same town for 35 years (oh, did I say that out loud?)! I’ve been following along on Facebook as Leslie, her husband, and her three kids have been traveling around the country in an RV for the past several months. And I cheered her from afar as she announced her plans to run a half marathon and then began to train (and kept training no matter where in our big ol’ nation she found herself on any given day).  Here’s my interview with her:

Thanks for doing this interview, Leslie! Can you first talk about what made you decide you wanted to do a half marathon?

I saw on Facebook that you (Cami) were going to do the Tinkerbell half at Disneyland and thought that kind of race would be fun. At the time I’d just started a Couch to 5k program and couldn’t even run 2 miles, but I like a challenge, and I needed something to force me to workout while I travel the country with my family for a year.

How did you pick the one you did?

I was unable to sign up for the Tinkerbell half (in California) before it closed, so I looked at the Disney Princess half in Florida. I reasoned it would give me another month to train, and I had to be in Florida for a wedding anyway. I watched a runDisney video and saw people dressed in costume, the character photo ops, running through the castle–it looked like fun. When I could run only two miles, I signed up because the price was going up that weekend.

Talk about your training: How did you train? What worked? What would you do differently next time?

Jeff Galloway is the runDisney trainer so I followed his beginner program. I ran 30 minutes on Tuesdays and Thursdays. On Saturday I alternated 3 miles with increasing miles on the other weeks. It was a 21-week program, and I followed it to a T pretty much. I missed a couple of short weekday runs when I got a huge blister, but I trusted in the program and was impressed at how it worked to get me to the mileage I needed. I was really impressed each time I finished a long run. They weren’t all fabulous times, but I was growing and learning as I went. I ran six miles straight at a 16-minute pace and felt great. I thought, “Maybe I can do this.” I re-read through the training program, and Jeff Galloway suggests a combination of running and walking so you’ll have less fatigue, recover quickly, and reduce injuries. I thought this was just to use at the beginning, but Jeff uses it all the way through his marathons. I was hoping to go faster than 16 minutes per mile, so I looked at the run/walk combo to help me speed up. I didn’t ever really master it but have since learned more and will focus on the run/walk sequence for future runs.

Did you feel ready? What were your biggest fears going in?

I was excited for the race since it had been on my mind for months. I was excited to see the characters, get the shirt, go to the expo, etc., and then I realized–I have to run 13.1 miles! But I trusted in the training that I had completed and believed that I was ready. Disney has a minimum pace of 16 min/mile because they need to open the roads. If you don’t maintain that pace you will be swept so that was my biggest fear. They have a “balloon” lady that walks at that pace and warns you to speed up if you fall behind. They literally pull buses across the course and you have to get on if you don’t meet the time requirement.

Tell us about the race: What did you love? What was hard? What surprised you? 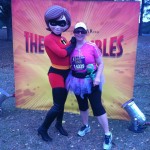 I loved the Disney experience! My race was like a Disney movie–a nice beginning, a scary middle, and a happy ending. The first six miles went quickly. Inside the Magic Kingdom it was fun to see my family, meet a bunch of characters, and run through the castle. I was relaxing and enjoying my time there. I debated about using the port o’ potty at one point because there wasn’t a line, but decided I didn’t have to go, so I’d keep running. Good thing I did because I heard mumbling about the balloon lady, looked around and found her in FRONT of me! She was saying there was a pick up at mile 8, so I hustled to get on the other side of her and stayed there. It made me nervous, though, and negative thoughts came to my mind–what if I didn’t get to finish? I’d have to tell everyone I didn’t complete the race. To battle my thoughts, I worked on positive mantras and a faster run/walk interval. I finally made it to mile 12 where I was safe from being swept, but the experience had become a race instead of a run for a few miles for me. That was hard.

What surprised me was my recovery. I felt great the next day and all the following days. The other thing that surprised me was that I actually did it. I trained for months, and I did it! I’m glad I have the pictures so show myself that that’s really me. For several days after the race, I couldn’t get over that fact that I did it. 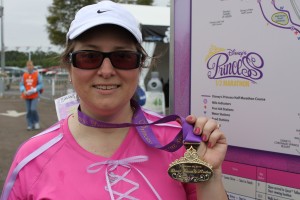 Do you think you’ll ever do another one?

I’ve already signed up for the Disneyland half so I can earn the Coast to Coast medal by running a Disney half marathon on both coasts in one calendar year. I’m totally doing it for the medal! My friend signed up, so I’m looking forward to running with someone else this time; that’s going to make it more fun. I’m happy that I have this goal to focus on so that I don’t lose the conditioning I’ve built up. I’m working on speeding up my pace so that I can have more time on the course taking pictures with characters.

What are your hopes for future races?

I may try some of the other races that sound fun–Rock and Roll, Get Your Rear in Gear, and Color Run.  I enjoy triathlons, though, so I might do a combination of triathlons and half marathons/10k in the future. My overall goal is to be physically fit so that if something fun comes up, I’ll be able to do it.

What did you learn about yourself on this journey?

The first two miles are hard, and it gets easier after that. Running is mental–the challenge of running 3 miles is about the same as running 13 for me. I also learned that if I exercise in the morning before I turn the computer on I won’t have guilt for the rest of the day because I got my work out in. Most importantly, I learned to trust in the process and the program. I may be slow, but I’m determined and can reach the goals I set!