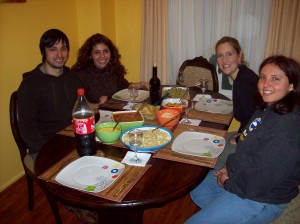 Bill and I arrived home from our latest adventure last Sunday. Delta kept us on schedule this time (and even sent us an apology letter for screwing up our flight to Santiago on the 11th). We’ve been reflecting on this trip as we catch up on sleep and organize our pictures. What an extraordinary experience we’ve had. 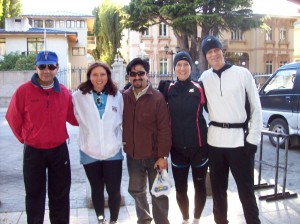 From left to right: Andres, Marina, Marcelo, Cami and Bill

The day after we arrived in Punta Arenas, we completed a 26.2 mile run around town. We’d promised our traveling companion, Marina (from California) that we would help her complete her South American marathon and, tired as we were from missing flights and being vertical for two days, we were determined to keep our word. Our local friends, Mackarena and Marcelo (teachers at Colegio Miguel de Cervantes) had arranged for the newspaper to show up and document our little race. Mackarena’s father, Andres, and Marcelo joined us as starters, along with a homeless dog who traveled exactly one mile before abandoning us once he’d decided there wasn’t any food in the deal for him.

Our time in Punta Arenas, both before the trip to Antarctica and after was filled with meals with friends, visiting classes at Miguel de Cervantes to hang out with the children and penguin sightings (apparently rare) along the Strait of Magellan. I have to give a shout out to Moka Joe’s, a little Bellingham coffee-roasting business, for helping me with gifts for our Sister City friends. The folks in Punta Arenas were so hospitable and kind (Mackarena and her husband, Omar, even loaned us their house to stay in for almost two weeks) that we truly can’t begin to repay them, but a little taste of Bellingham left behind will hopefully remind them with every sip that we are grateful for their friendship.

On Wednesday evening (March 17) of our first week, Bill, Marina and I showed up at the DAP airline office for a meeting about the trip the following day to King George Island, Antarctica. As you know, we’d originally organized this expedition with the plan of running 26.2 miles on the island in order to complete the marathon distance on our seventh and final continent. As you also know, in the process of creating said plan, we were told that we could not “plan” or “organize” anything that resembled a “race,” an “activity,” an “event” or a “marathon.” So, alas, saddened and discouraged, I nevertheless agreed to continue on my scheduled flight to King George Island in hopes that I might be able to sneak out of view at some point and run around (even in circles) to meet my goal, while Bill said he wasn’t interested in going if he wouldn’t have a guaranteed chance to run once we touched down.

Wednesday evening, however, Bill had a little change of heart. We met with Carlos, a representative from DAP, in a tiny office enclosed on all sides by thick glass walls. There were five of us squeezed in there: Marina, Bill and I, Kara, a Minnesotan in her thirties who quit her job and is now roaming the world for the few months, and Alex, another American from Illinois who is heading off to med-school in the fall when he finishes several months of international travel and gallivanting. There was one other tourist on the list for the trip the following day who couldn’t be with us, a Russian fellow named Yury, who was flying in late that night. We wouldn’t get to meet him until the next day. After Carlos filled us in on all that we needed to know for the trip, I turned in my chair and looked at Bill. I could see his eyes sparkling, reflecting light from outside one of the big windows. He was biting the inside of his cheek and knitting his brows together. I know that look. He was changing his mind about coming along the next day.

As the five of us passengers had been chatting, I’d explained to Kara and Alex that Marina and I hoped to get out for a renegade run. The two were so supportive and enthusiastic about our idea that Bill began to think it might be worth his while to take a chance and come along. After the meeting, he got up and followed Carlos to his desk to find out if there was room on the plane. There was.

We arrived on KGI at about 1:30 the following day (March 18). Immediately, our guide Alejo, a wild-looking Chilean man in his mid-fifties with a graying beard and astute, clear eyes, whisked us into a Zodiac (after requiring us to change into puffy, flotation suits) and out onto the bay. “The weather is good now. We must hurry.” He said. My mind was so latched onto getting my miles in, come hell or high water (as they say), that I didn’t appreciate what Alejo was communicating. The weather changes so rapidly in this region that tourists can pay thousands of dollars to land on the island and never really have the opportunity to see its majesty. We had no wind and no rain or snow at the moment. We were going to get a rare chance to see the glacier.

Collins Glacier was accessible via the waterway one can see from the little scientific community on the island. I was glad for the wind and chill-resistance of the padded suit as we trolled out into the frigid water passed a blue iceberg, crossing paths with little bobbing penguins. In a half hour we were sitting beside a grand ice pack several stories high, listening to the monstrous glacier live its ancient life without regard to our presence.

I’ve never been that close to a glacier before. And once again, as at many other times on my travels these past few years, I was aware of how much I don’t know. In this case, how much I don’t know about glaciers, especially those in Antarctica. I did sink into the moment and appreciate it, however. I momentarily let my dream of running go by the wayside and said to Bill, “If for nothing else, seeing this is worth every penny.” He nodded in agreement. 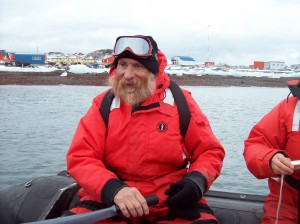 It was at the penguin colony an hour later that I rounded up the courage to approach Alejo and talk to him about running. He listened to me express my desire to run while on the island and nodded sagely as I explained how important it was to me. But he was awfully quiet. He did say, “People on the island exercise, too, you know.” He also reiterated, “You cannot plan an event or activity in Antarctica.” Yes. I was clear on that. Very, very clear. But could I run?

By the time we got back to the Chilean barracks for a snack, it was 5:30. We had less than 15 hours left on the island. Our Garmin GPS systems (we had three of them with us) indicated that we had walked only two miles in the course of the day since the plane had landed. There was still a long way to go to reach 26.2. The winds were still calm at this point, but a light flurry of snow was beginning to fall. The sky was darkening. We six tourists sat around for about an hour while Alejo took care of some duties unrelated to us. When he came back, he explained what the evening would hold. He planned to take the group on a walk to the Russian Orthodox Church and to some locations for photo opportunities and then we would come back to the barracks for dinner and drinks.

He looked at Marina, Bill and me and said, “If you stay on the roads. It doesn’t matter how fast you get to the Russian Church. We will meet you there. And I’ll show you the other roads we will use.”

So at 6:30 pm, as the others finished their cups of cocoa and pulled on their warm down coats, we three hopeful runners suited up in our running gear, gathered our energy gels, donned our headlamps (it would be dark by 9:00) and ducked out the door. I wasn’t entirely sure Alejo understood we wanted to run for several hours, but I’d learned by this point that Alejo, himself is a world-class mountaineer and skier. He is well accomplished as an athlete in his own right and had confided to me that he never goes anywhere without his running shoes. I thought we understood each other.

We said goodbye to our new friends and headed out the door to run until one of three things happened. Either the darkening sky would dump on us and we would be forced back indoors; someone would intercept us and tell us we had to stop running; or we would meet our goal.

I hate to tell you this, but I’m not going to reveal what happened. I’ve already said that I’m happy with our trip, but you’ll have to read the book (Title: Second Wind – it’ll be released by Seal Pressin October, 2010) to find out what made me so happy. I’m sorry to do it to you – sort of. If you know me well enough to have my phone number, I’ll probably tell you more (I’m cheap – a glass of wine will get you everywhere). For those of you who have been following along and cheering for me, I thank you.

Stay tuned for news of our trip to Torres del Paine, Patagonia’s great national park. Our trip there didn’t include a marathon, but there are some good stories and pics I want to share.